Fennel Soup with Shrimp and Beans 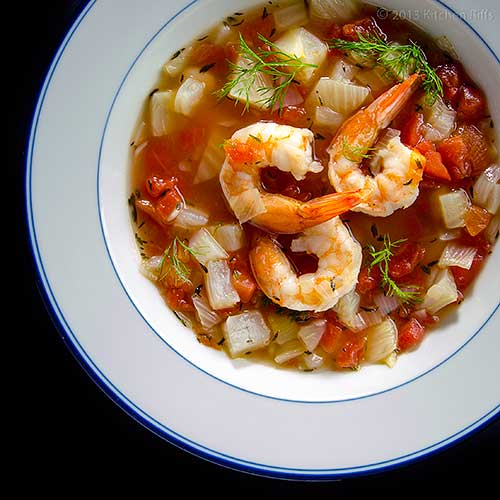 Serve this Hearty Soup as a Starter or a Main Course

You’ve probably seen fennel in the produce department at your local supermarket.  It’s a bulbous plant with stalks maybe a foot long, and topped with feathery green foliage.  Here in the US, not many cooks use it.  Too bad, because fennel has a great, distinctive flavor that combines well with other ingredients.

If fennel is new to you — or you haven’t used it for a while — why not try some in this terrific soup?  January is the time of the year when many of us determine to eat healthier, and there’s nothing healthier than eating your veggies.  And the more veggies you know how to use, the more likely you are to eat them. 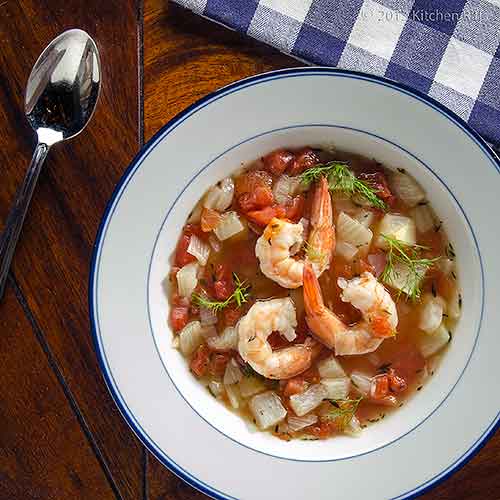 Although fennel is a supermarket staple year round, in the US it’s most prevalent during the cooler months — beginning in fall, and continuing through winter.  So now is a good time to buy it.

Sometimes fennel is sold with the green tops removed — although given a choice, I always like to buy it with the tops intact.  Those hair-like green fronds make a great garnish, and offer good flavor.  When buying fennel, look for bright green tops.  The bulbs should not have brown spots and should be firm when pressed with your thumb.  Avoid plants that look dried out or seem mushy when pressed.

Although many fennel soup recipes feature potatoes, we’re using beans in ours.  Because fennel combines well with seafood, we’re also adding shrimp.  If you prefer, you could substitute chunks of a firm fleshed fish, or leave out the seafood component altogether. This recipe is adapted from one I found in James Peterson’s Splendid Soups; the original didn’t call for shrimp.

This recipe serves 6 to 8 as a first course, 3 or 4 as a main course. If serving this as a main, you’ll probably want to augment the meal with bread and perhaps a salad. Preparation time is about 10 minutes, cooking time another 30 minutes. 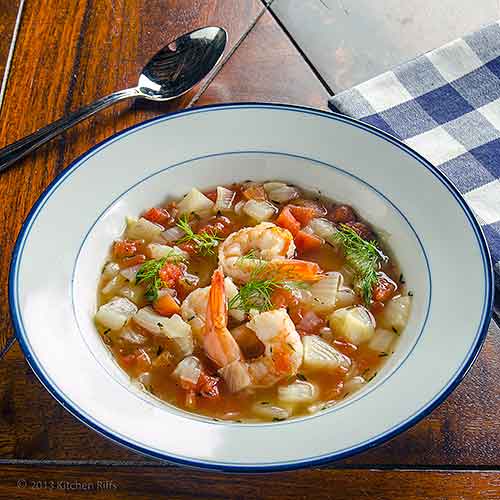 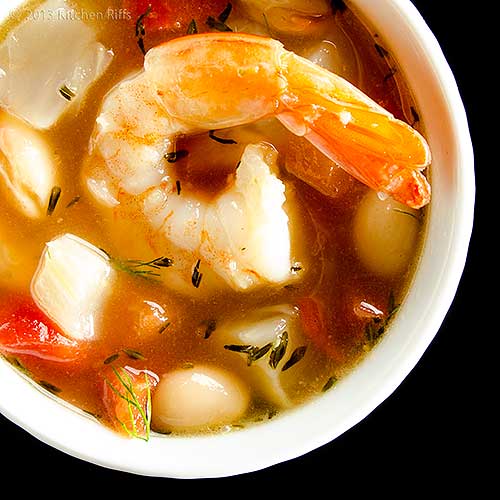 Food of the Gods

Fennel played a notable role in the culture of ancient Greece.  According to Greek mythology, the Titan Prometheus used a giant fennel stalk to steal fire from the gods for the benefit of humans (seriously annoying Zeus in the process).  Dionysus, the god of wine (and frenzied madness), was often portrayed holding a stalk of fennel.  Fennel stalks also formed the shaft of the thyrsus, a sacred implement used in religious ceremonies, symbolizing fertility and prosperity.

In ancient Greek, fennel was called marathos.  The town of Marathon was located in a field of fennel, and took its name from the plant.  It was at Marathon that a small army of Athenians, though greatly outnumbered, fought off a large invading Persian force in 490 BCE.

They must have been eating their veggies.