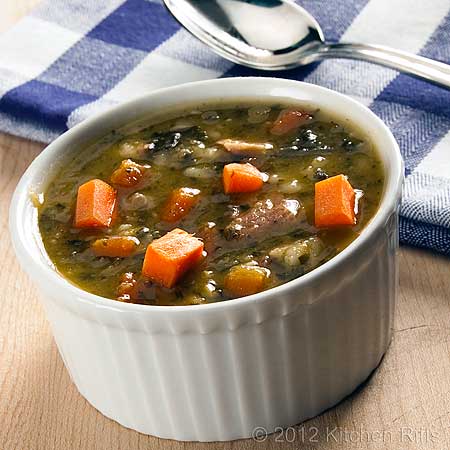 How do you make Split Pea Soup without hambone?

Fortunately, no. Last year we discussed how to make Split Pea Soup with Bacon. That recipe uses bacon and ham base as a hambone substitute and it is relatively quick to prepare. But good as the flavor is, it lacks a certain oomph.

If you want Split Pea Soup with traditional flavor— but without the traditional hambone — you’ll need to look for a “secret ingredient” in your supermarket meat department:  smoked ham shanks or ham hocks.  These inexpensive miniature “hambones” are the perfect size for soup making. 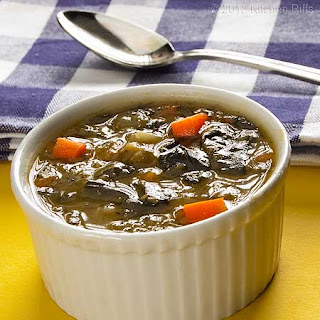 Dark, leafy greens are nutritional wonders.  Including them in dishes made with dried beans, legumes, and pulses is an easy and extremely tasty way to fold them into our diet.  They also add a new and interesting dimension to this soup.  But you can also make this dish without the greens (just skip them).  More about that in the Notes.

First, you need to make a stock with the ham shank.  (This is a soup, so tasty stock is important.)  Because you need at least an hour and a half to develop good flavor — and because split peas take only about 45 minutes to an hour to cook — you’ll need to start the stock, then add the split peas halfway through.

Second, you need to sauté/braise the dark greens.  Long-cooked greens can be delicious, but if you add them to the pot at the beginning of the recipe (which means letting them cook for 2 hours), they’ll turn into a dark gloopy mess.  To retain their fresh, characteristic flavor, you should add them after you add the split peas to the soup — about an hour into the recipe.

Depending on how thick you make the soup (how much water you add), this recipe makes about 4 quarts — enough to feed a crowd.  Leftovers freeze well.  This recipe takes about 2 hours total; active time is 20 to 30 minutes. 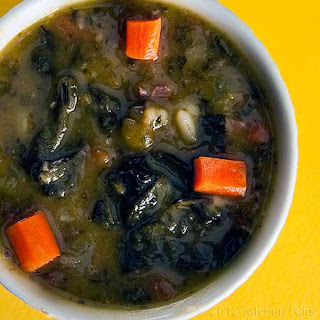 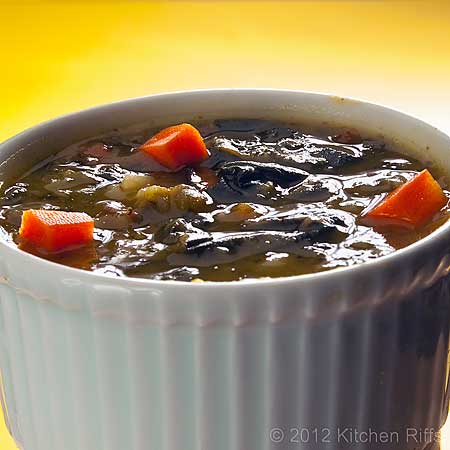 Bring on the Super Bowl!

This is a great main course soup.  It’s also great for informal parties — like a Super Bowl Party, or to bring to a pot luck dinner.

Speaking of pot lucks, Kitchen Riffs contributes some recipes to gojee. Split Pea Soup with Greens is the dish that I’ll be bringing to the potluck they’re holding for their contributors later this week. Well, actually I’m bringing it virtually, since I’m in St. Louis and they’re in New York City.

Starting on Thursday, January 26, check out other potluck dishes shared by fellow gojee contributors. Go to gojee.com and enter “gojeepotluck” into I Crave. You can also follow #gojeepotluck on Twitter.

Yum, yum, yum ... I love split pea soup and your recipe now has me craving it!

I'll definitely need to whip this up this winter!

Hi Kimberly, great soup, isn't it? Sorry I've created that craving! Thanks for your comment.

Hi Jay, it is pretty good. You don't normally think of adding greens to Split Pea Soup, but the combo really works. Thanks for stopping by.

Mmm. Another scrumptious looking soup. I am definitely adding this to my winter soup list.

Hi Russell, Split Pea Soup is great. I love its traditional flavor, and you're right - it's perfect for winter. Thanks for taking time to comment.

This soup must have such depth of flavor - it sounds just delicious! I don't think I'll be able to find ham hocks here, but I can come by bacon. I'll have to check out that other recipe of yours.

Hi Katherine, the flavor is terrific! But the bacon version is really good too (I haven't add greens to that, but I think they'd be wonderful in it). Thanks for stopping by.

What a healthy soup. Filling and comforting!!!

Hi Asmita, you're right that it's healthy and definitely filling. Really a nice soup. Thanks for commenting.

What a delicious looking soup. I haven't had split peas anything in a while...I'm going to have to try this soon next time!

Hi Simply Tia, thanks! Split peas are easy to forget about - but when you have them again you wonder why. They've got great flavor. Thanks for commenting.

Hi Patty, this soup has wonderful flavor - I think you'll enjoy it. Thanks for stopping by.

Hi make this soup all the time with bacon, ham, homemade ham stock, ham hocks etc. However I was wondering where you got your ham cubes or base because I like to keep them around, just in case. Also what is the brand name and any other info about the product you can give me. My source just ran out. Thank you in advance! By the way it's my favorite soup.

Hi Anonymous, I usually buy my base at the supermarket. I like the Better than Bouillon brand, but over the last year or two I've seen some other brands carried at my supermarket (which I haven't tried). Pennzey's has a base that's pretty good. The second Note (above) lists some sources for soup base. Hope that helps, and thanks for stopping by.

A shame I can't pin this, I can't understand why you wouldn't want the free publicity driving people to your website that Pintrest generates.

Hi elocrian, I'm not sure why you can't pin this - I haven't put any restrictions on photos so people can't pin them. And I know others have pinned lots of my pictures. But thanks for the heads up - I'll investigate to see if there's some setting on the blog that's preventing pinning.