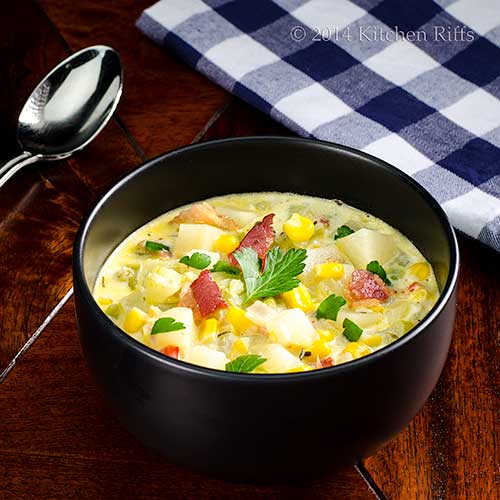 Celery takes the lead role in this hearty dish

We all have celery in the fridge, right? Usually a wilted, half-used head buried deep in the vegetable bin.

Most of us wouldn’t even think of using celery as a main ingredient. But I say it’s about time this shy veggie got some love.

Our Celery, Corn, and Bacon Chowder highlights the flavor of celery—in a warming comfort food. And with the cold, snowy weather we’ve been having in most of the US lately, I need all the warming comfort I can get. 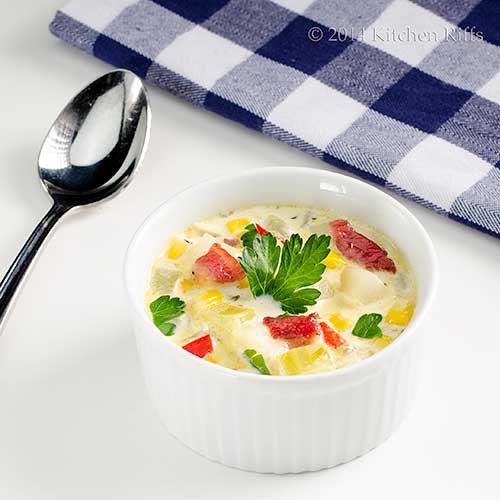 Chowders are cream- or milk-based stews, usually thickened with potatoes or crackers. Although we often think of seafood (particularly clams) when someone mentions chowder, there’s no reason veggies can’t play the main role—as noted when we posted about our Winter Squash, Corn, and Bacon Chowder.

Each year, we like to showcase an underused vegetable on our blog—and spend some time getting to know it better. In the past we’ve explored sweet potatoes, Belgian endive, and fennel. This year our focus will be on celery. We’ll also highlight celeriac (a/k/a celery root—a variety of celery grown especially for its root, not its leafy ribs). But be aware that some people are allergic to celery; more on that in the Notes.

Exact quantities aren’t critical in this recipe (the same is true with most chowders). Feel free to use a bit more or less than we recommend when it comes to celery, potatoes, corn, bacon—basically anything.

Prep time for this recipe is about 15 minutes, with cooking time of half an hour or so. So you can have this chowder on the table in about 45 minutes.

This recipe yields 4 main-course servings, or 8 first-course servings. Leftovers keep for a couple of days if stored in an air-tight container in the refrigerator. 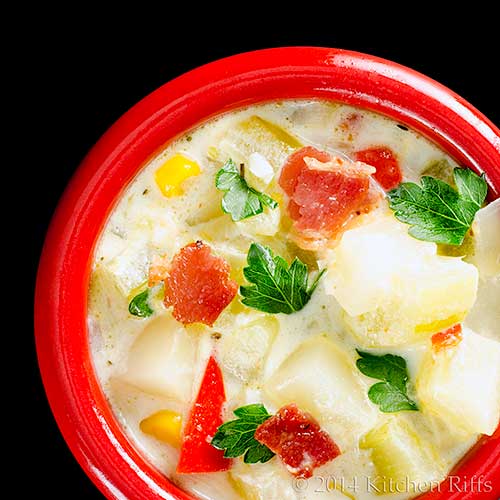 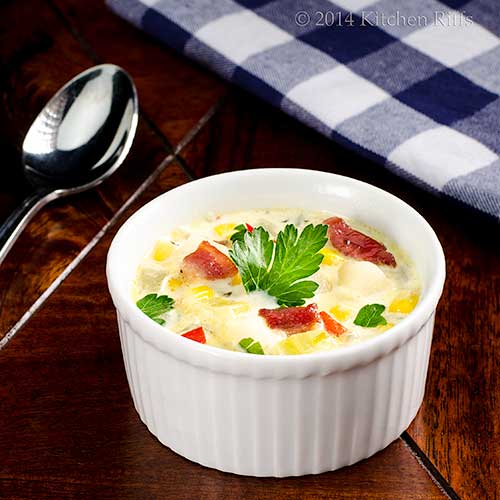 “So we have a blog called Bizzy Lizzy’s Good Things to thank for our vegetable of the year?” asked Mrs. Kitchen Riffs.

“Yes, well, the ‘good things’ in the blog’s title comes from Jane Grigson’s cookbook—also called Good Things. I hadn’t looked through that cookbook in years. The book is wonderful, so I read it again.”

“And saw some recipes for celery?” asked Mrs K R.

“A whole bunch of recipes,” I replied. “Or should I say a whole stalk of them? Heh, heh.”

“Anyway, it got me thinking about how celery is an underrated ingredient,” I said.

“With puns like that, it’s no wonder,” she replied.

“Then a few months ago, I saw a recipe for Lamb with Celery and Cumin on Blue Kitchen. The recipe looked terrific. And although celery wasn’t the dominant flavor, it played a leading role.”

“And that inspired you?”

“Well, that’s when I decided to work on some more celery dishes,” I said. “You might say I was stalking celery. Heh, heh, heh.”

“So we’ll be featuring lots of celery in our next few posts,” I said. “And for good measure, we’ll throw in some recipes for celeriac.”

Mrs K R fixed me with her gaze. “So I guess we’ll be having a real celerybration,” she said.

You may also enjoy reading about:
Winter Squash, Corn, and Bacon Chowder
Sweet Potato Chili with Black Beans
Fennel Soup with Shrimp and Beans
Chunky Pork and Sweet Potato Chili
Sweet Potato Soup with Chilies and Corn
Kale, Quinoa, and White Bean Soup
Or check out the index for more recipes
Posted by Kitchen Riffs at 9:15 AM