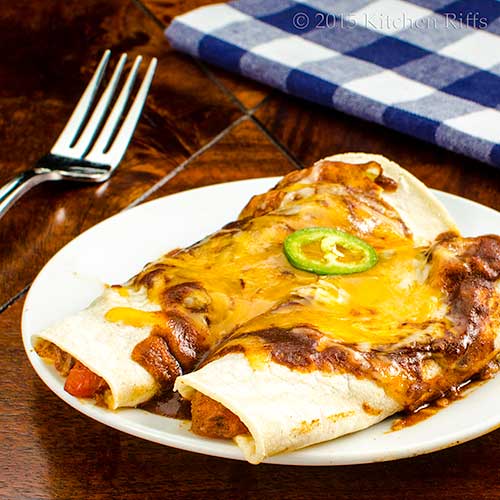 Enchiladas are a favorite with us. And their variety is endless.

We’re especially partial to Tex-Mex enchiladas: Corn tortillas wrapped around a savory filling, then covered in chile sauce and baked (usually with a thick coating of melted cheese). Yummo!

And when the filling is shredded beef, they’re pretty much irresistible. 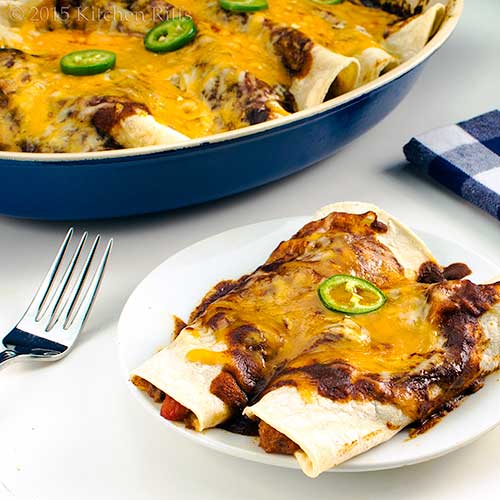 Enchiladas can be plain (or not). At their most basic, in the form of Enchiladas Rojas, they’re just hot corn tortillas dipped into a thin spicy sauce made from dried red chilies. No filling—just corn tortillas and scrumptious sauce.

We’re making our enchiladas with a filling of Mexican-style shredded beef. But you can substitute almost any filling you want. Shredded chicken and pork are popular choices. Mexican Charro Beans are also nice. Or just use shredded cheese. Or veggies. No matter what filling you choose, the enchilada sauce and the assembly method remain the same.

Traditionally, the sauce for Tex-Mex enchiladas is made with whole dried red chilies. But these aren’t always readily available (and using them takes time), so we substitute dried red chile powder instead. We suggest using ancho chile powder, which is available in most supermarkets (it has great flavor and is fairly mild). If you can’t find chile powder, you can substitute chili powder (we explain the difference between the two in the Notes).

This recipe has three parts: First you prepare the shredded beef. We’re using the beef from our Shredded-Beef Soft Taco recipe, but with a different final step (we include the entire procedure for preparing the shredded beef, so you don’t have to click over to that earlier recipe.)

Second, you prepare the enchilada sauce. You can substitute commercial jarred enchilada sauce if you want, although its flavor won’t be nearly as good.

You can complete both these parts of the recipe a day or two ahead of time if you prefer (and you can make the enchilada sauce while the beef is cooking).

For the final phase in this recipe, you assemble and bake the enchiladas.

If you’re making this dish all at one go, allow about three hours total for prep and cooking time (much of the cooking time will be unattended). If you prepare the shredded beef and enchilada sauce ahead of time, final assembly and baking of the enchiladas will take just half an hour or so.

This recipe makes about a dozen enchiladas. 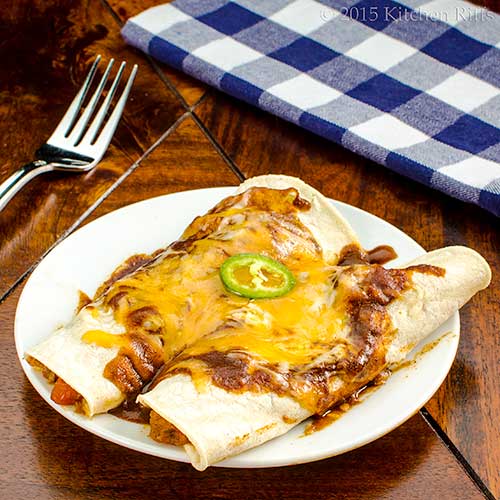 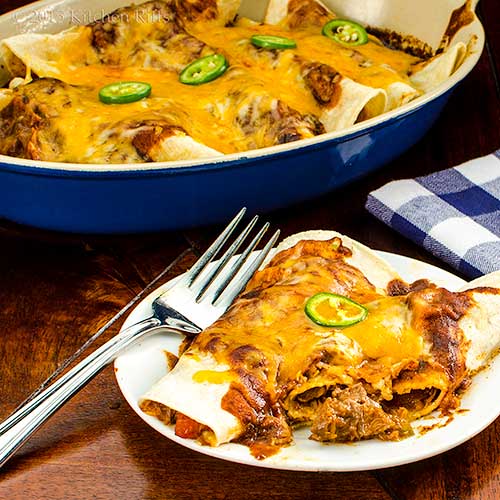 “And if we run out, we can have some of those great Shredded-Beef Soft Tacos we featured on the blog last week,” I said.

“Made with our own wonderful Homemade Tortillas,” said Mrs K R.

“Which would also go well with the Charro Beans we featured a few weeks ago,” I said.

“I’d vote for pairing any or all of these dishes with a nice tequila-based drink,” said Mrs K R. “Like the Rosita Cocktail we posted about early this month.”

“Or a Margarita,” I said. “If you want to be traditional.”

“You could sip it while munching on some chips and our Velveeta Tex-Mex Dip,” said Mrs K R.

“Sounds like we’ve posted the makings for an entire Mexican meal,” I said.

Why didn’t I see that coming?