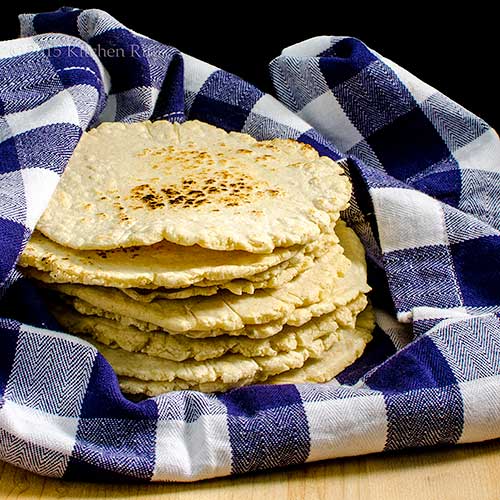 It’s hard to imagine a Mexican meal without corn tortillas. Having tacos or enchiladas? Corn tortillas are integral to both dishes. Want to start with salsa and chips? Crispy thin tortillas play a starring role. Serving a spicy mole or seafood dish? Warm tortillas slathered with butter make a great accompaniment.

You can buy ready-made tortillas in the grocery store, and they’re serviceable in a pinch. But they can be bit bland. In fact, when it comes to taste and texture, packaged tortillas can’t compete with freshly made.

Fortunately, it takes only minutes to make corn tortillas in your own kitchen. So why not? It’s loads cheaper and tons healthier. Not to mention perfect for your big Cinco de Mayo blowout. 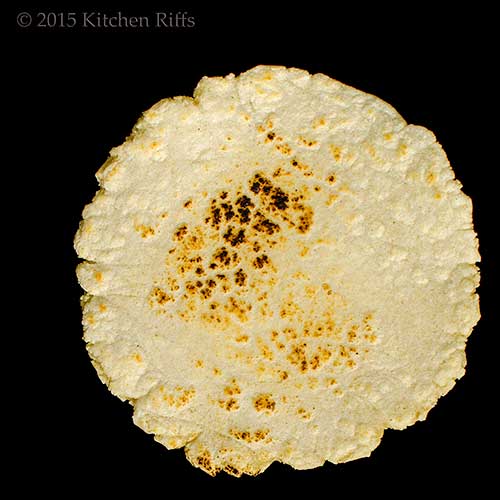 In our part of the world, a tortilla is a form of flat bread (the word means something different in Spain; see Notes). You can make tortillas from maize (corn) or wheat flour. In Mexico, corn is a principal crop, so it’s no surprise that corn tortillas are found throughout the country. Flour tortillas are a bit more popular in northern Mexico (where wheat is commonly grown) and in the US.

The dough for corn tortillas is called masa (which is Spanish for, well, dough). You can use masa made from freshly ground corn or you can use dried masa harina (which means “dough flour”—it’s the dried, powdered form of fresh corn masa). Masa harina is what you’re most likely to find at the supermarket, so that’s what we use in this recipe.

Traditionally, corn tortillas contain only two ingredients: masa harina and water. Some people like to add a bit of salt and/or oil. We use the traditional recipe here, but in the Notes we discuss adding salt and oil.

It’s easiest to make tortillas with a tortilla press (basically a device that flattens a ball of dough into a flat circle). But if you don’t have a press, you can use a heavy pie plate or the bottom of a saucepan (see Notes).

Tortillas are baked on a griddle. We use an electric one that allows us to bake 6 at a time. But you can also do them one at a time in a frying pan.

Prep time for mixing tortilla dough is 2 to 3 minutes. It then takes another 2 to 3 minutes to bake each tortilla on a griddle (so total cooking time depends on the size of the griddle you’re using).

This recipe yields about 12 to 14 tortillas. They’re best when eaten immediately after cooking. But you can prepare them an hour or two in advance, and then reheat them (see Notes). 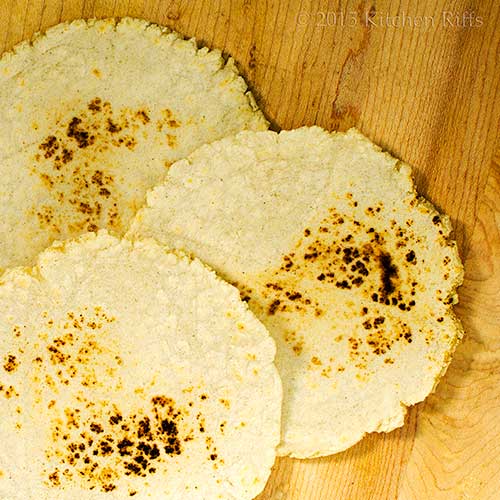 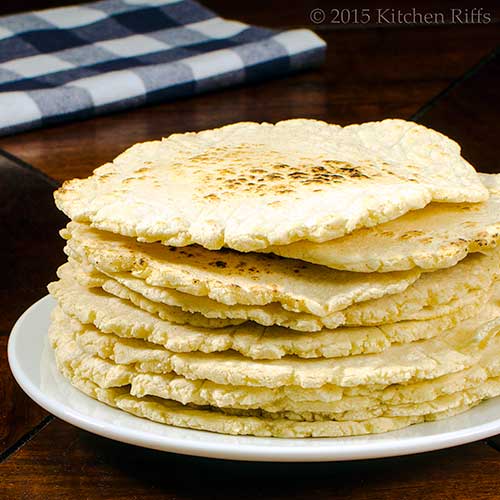 “Love these tortillas,” said Mrs. Kitchen Riffs. “And they’re great with Mexican Charro Beans. Do I sense that we’re in the midst of a Mexican recipe series?”

“Indeed we are,” I said. “Cinco de Mayo is coming up in a few weeks, and I want to be prepared.”

“We started this month’s posts with the Rosita Cocktail,” I said. “That drink features tequila, which is the quintessential Mexican liquor.”

“Right. And next week we’ll do soft tacos,” I said. “Made with these tortillas, in fact. Plus spicy shredded beef.”

“To round off the month, we’ll do enchiladas,” I said. “And we’ll use that shredded beef again as a filling.”

“Glad to hear about the enchiladas,” said Mrs K R. “After all, Riffs do not live by tacos alone.”

“I strive to provide a balanced diet,” I said.

“And shredded beef in both the soft tacos and the enchiladas?” said Mrs K R. “I guess that answers the age-old question.”

You may also enjoy reading about:
Mexican Charro Beans
Easy Hard Shell Tacos
Shrimp in Chipotle Sauce
Salsa and Picante Sauce
Velveeta Tex-Mex Dip
Rosita Cocktail
Or check out the index for more recipes
Posted by Kitchen Riffs at 9:15 AM