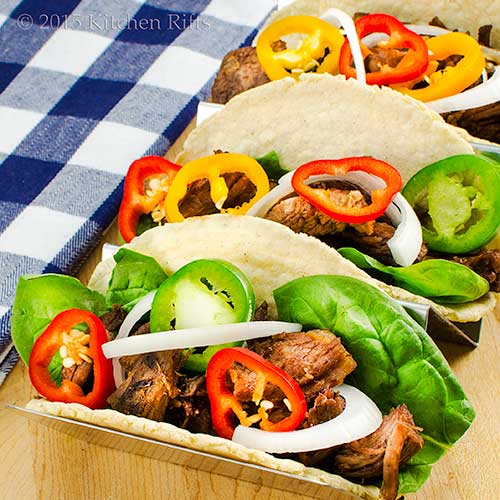 We can’t say no to tacos. Who can resist their luscious combination of corn tortillas, spicy chilies, savory meat, and cheese?

In the US, most people seem to favor ground beef for taco filling. But we prefer to use Mexican-style braised beef that’s been shredded. The flavor is deeper, plus the shredded meat has a more interesting texture.

And what about the tortillas? Well, we love the crispy Hard-Shelled Tacos that are a tradition in many Tex-Mex restaurants. But given a choice, we’ll take soft tacos any day of the week.

With soft tortillas, you don’t have to worry about the taco shell shattering when you take your first bite (there’s nothing messier than a taco that disintegrates in your hands). More important, when making soft tacos, you can use your own Homemade Tortillas. Freshly baked tortillas are amazing, and we grab any opportunity to use them.

So soft tacos give you wonderful flavor and loads of zip in an easy-to-eat package. Don’t you love the taste of Mexico? 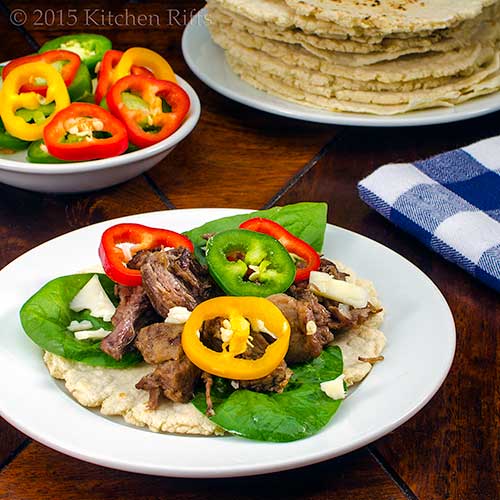 Tacos are endlessly versatile, and you can use almost any ingredient as the filling. If it sounds good to you, it probably will be. We have a special fondness for beef tacos, so that’s what we’re featuring here (but we give some alternative suggestions in the Notes).

There are two parts to this recipe. First, you need to prepare the shredded beef. Then you assemble the tacos. For that you’ll need corn tortillas, preferably homemade. But if you don’t have those on hand, store-bought tortillas will work fine. BTW, homemade tortillas are thicker and sturdier than the commercially made variety. So if you’re using thin store-bought tortillas, you may want to use two for each taco to make sure everything holds together.

Cooking time for the shredded beef is about 1½ hours, and you can do much of the cooking ahead of time (see Notes). Assembly time for the tacos is a few minutes.

This recipe yields about a dozen tacos. Leftover shredded beef will keep in the fridge for a few days if stored in an airtight container.

For the shredded beef:
For assembling the tacos:
Procedure

For the shredded beef:
For assembling the tacos: 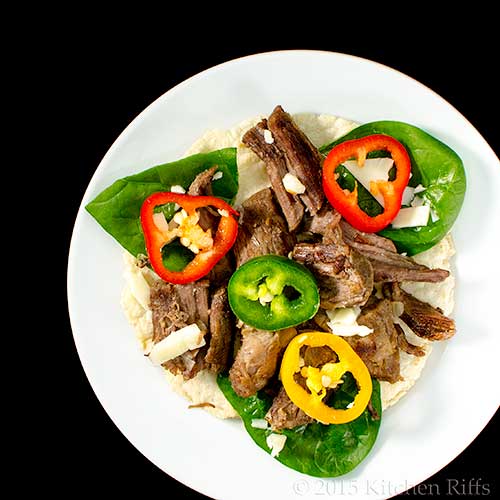 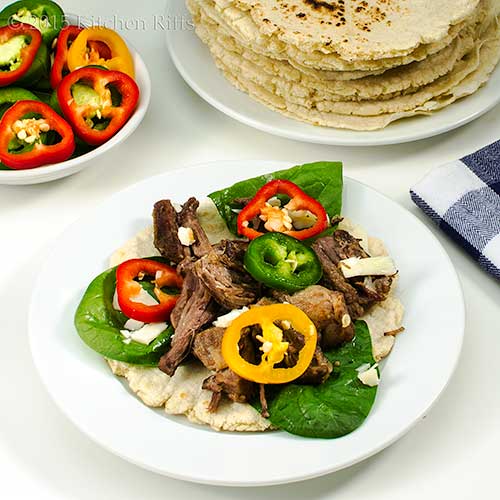 “I’ve always loved hard-shelled tacos,” said Mrs. Kitchen Riffs. “But the soft ones are even better.”

“Yeah, my sense of humor is cheesy,” I said. “But I guess that’s nacho problem.”

Guess now is not a good time for enchilada puns.


You may also enjoy reading about:
Hard-Shell Tacos
Mexican Charro Beans
Salsa and Picante Sauce
Peach Salsa
Plum Salsa
Taco Salad
Frito Pie with Chili
Or check out the index for more recipes
Posted by Kitchen Riffs at 9:15 AM