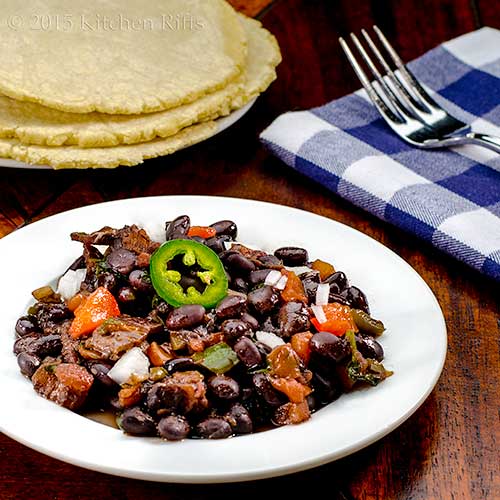 Who doesn’t like a side of beans when you’re eating Mexican? They’re the perfect accompaniment to tacos, enchiladas, or just about anything else.

You could have refried beans, of course. But we prefer something with a bit more zing. So we turn to Frijoles Charros—brothy Mexican-style beans enhanced with succulent pork (we vote for bacon), spicy chilies, and tangy tomato.

They’re easy to make, and actually taste better if prepared a day ahead. Convenient! And they’re perfect for Cinco de Mayo. Which just happens to be coming up in a few weeks (funny how that works in the blogging world). 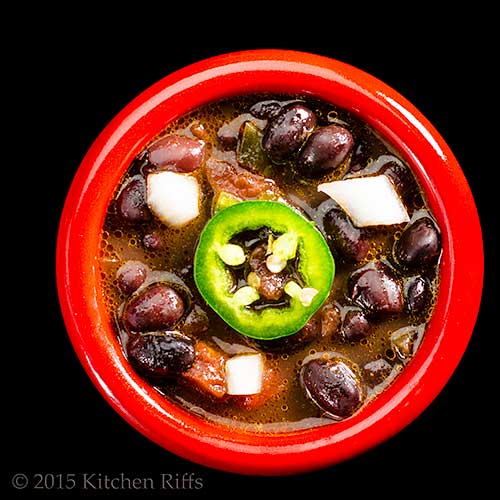 In Mexico, “charro” refers to a traditional horseman (sort of like a cowboy) who typically dresses in colorful garb. So “charro beans” are beans cooked as a charro would prepare them.

The dish most typically features pinto beans, though black beans are a common substitute. We prefer black beans because we like their color and their depth of flavor.

To make this dish, you start with cooked beans—what in Mexico would be called Frijoles de Olla (an olla is a clay cooking vessel often used to cook beans, so the phrase translates as “beans from the pot”). We like to use dried beans, but you can substitute cooked, canned beans if you like (see Notes for instructions).

Traditional Mexican cooking doesn’t call for soaking dried beans before cooking. Instead, the beans are placed in a pot with water, then cooked until tender. They take longer to cook than presoaked beans, but taste just as good. We use that traditional method for this dish.

We have divided this recipe into two parts. The first part involves cooking the dried beans (which you can do a day or two ahead of time if you wish). The second part involves flavoring the cooked beans with ingredients that transform them into Charro Beans.

Prep time for this dish is half an hour or so. Total cooking time is about three hours, although much of it is unattended.

This recipe yields a quart or so of beans. Leftovers keep well for a few days (and actually improve in flavor) if stored in an airtight container in the refrigerator. Or you could freeze the leftovers.

Charro beans make a great side dish. But they’re also hearty (and tasty) enough to serve as a main course. If you go that route, serve them with tortillas or cornbread.

For the initial cooking of the beans (Frijoles de Olla):
For assembly of the Charro Beans:
Procedure

For the initial cooking of the beans:
For assembly of the Charro Beans: 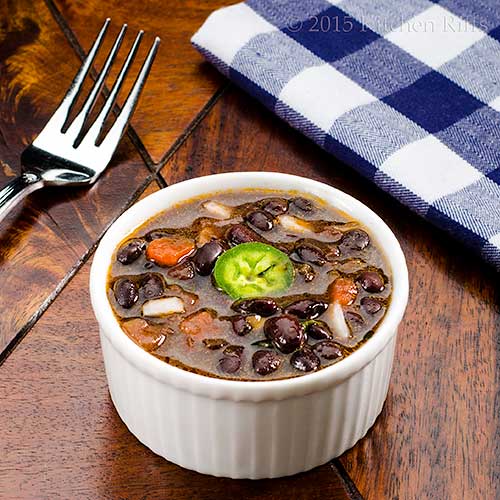 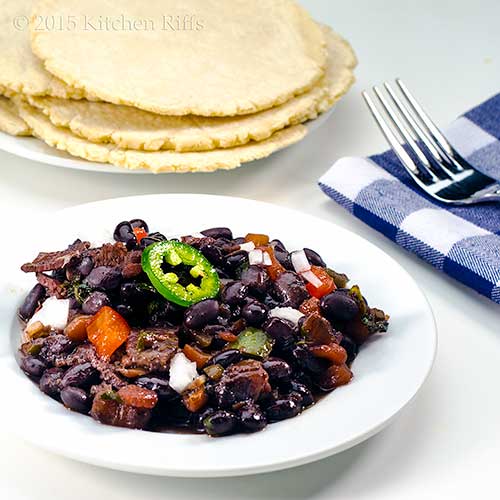 “Who knew beans could taste so good?” said Mrs. Kitchen Riffs, scooping her Charro Beans with a corn tortilla. “Love the smooth mouthfeel too.”

“That’s probably the lard I added,” I said. “Even a little bit does so much for this dish.”

“Speaking of which,” I said. “I, um, borrowed some of your leaf lard for this dish. Hope you don’t mind.”

“Aha! I was wondering why my lard has been disappearing,” said Mrs K R.

“Good lard,” I said. “These puns are terrible.”

“Yes, better wrap this up before they get any worse,” said Mrs K R. “We’ll make a greaseful exit.”

You may also enjoy reading about:
Quick and Easy Tacos
Shrimp in Chipotle Sauce
Salsa and Picante Sauce
Velveeta Tex-Mex Dip
Taco Salad
Green Chile Chili Beans with Bacon
Skillet Jalapeño Cornbread
Or check out the index for more recipes
Posted by Kitchen Riffs at 9:15 AM