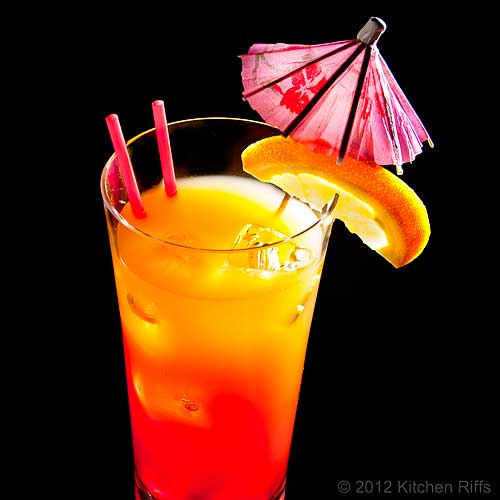 A 70s Drink with Far Out Flavor

Remember John-boy?  Ever yelled “shazam” or “right on”?  Ever shake your booty at the disco?

If so, you probably remember the Tequila Sunrise, that trippy combo of tequila, orange juice, and grenadine that became the rage early in the 1970s.  It was the drink that introduced lots of people to tequila.

I’ll bet you haven’t had one in ages — even if you’re old enough to remember it.  So with National Tequila Day coming up on July 24th, what better time to get reacquainted with this drink?

Rediscover what you once knew:  The Tequila Sunrise is outta sight. 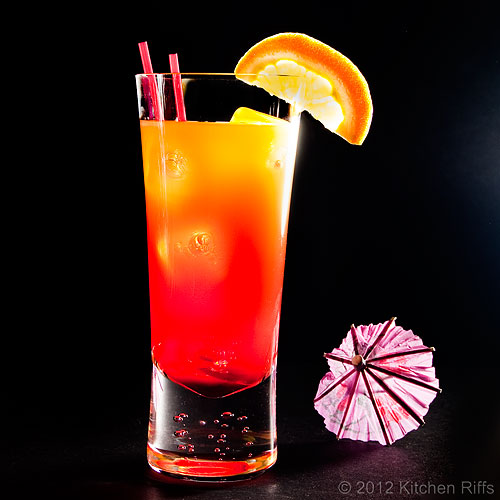 There are actually two versions of the Tequila Sunrise: the version that we’re talking about today (and that any bartender will automatically make for you if you order this cocktail). And the original, which dates back to the 1930s or maybe 40s — a drink that didn’t include orange juice, and may not have included grenadine. More on that in the Notes.

The version we all know today was created by Bobby Lazoff and Billy Rice in the early 1970s at the Trident restaurant in Sausalito, California.  The grenadine creates gradients of color that, combined with the OJ, resemble a sunrise (or a sunset, depending on your mood).

This drink is usually served over ice in a tall (Collins) glass — one that holds 10 ounces or so.  But you can also serve it in a cocktail glass, which is a different and pleasant way to drink it. 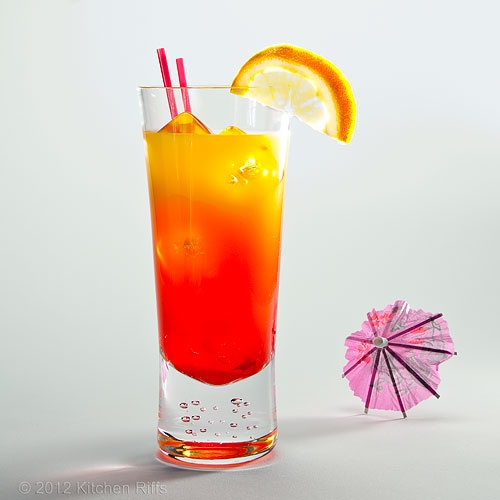 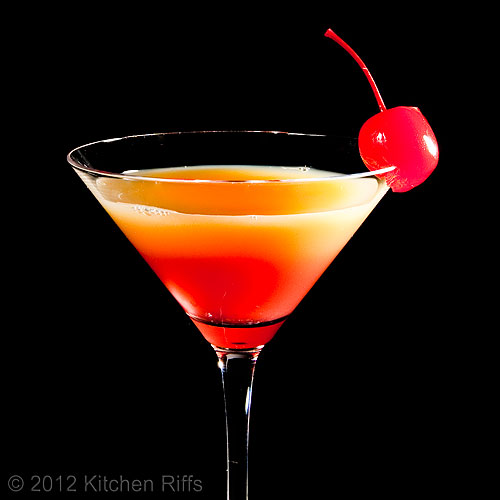 Next Up?  The Mother of All Tiki Drinks

“Hmm,” Mrs. Kitchen Riffs sighed as she sipped her Tequila Sunrise, “this flavor really takes me back.  It’s so, so fine, dude.”

We looked at each other and giggled.  Yes, we actually used to talk like that back in the day!  Our exposure to slang started in the 60s — and then got sillier in the 70s.

“Well, next week’s drink is going to be the one that quite possibly inspired Don the Beachcomber to begin creating Tiki drinks.  As you know, Don was the genius who created the Tiki craze after World War II.  Anyway, it’s an old Jamaican drink, dating back to the 18th century.  So it’s rum-fueled, of course — and it’s called Planter’s Punch.  So hang loose!”

“Funky!” Mrs K R exclaimed as she drained her glass.  “But that’s next week.  This week shall we ‘take another shot of courage?’”

Never one to bogart the tequila bottle, I dutifully made us another round.

You’ll want to mix one up too.  Cause this drink rules.  Can you dig it?

I am hysterically laughing at all of your groovy 70's references! I still can't go to sleep without the occasional "G'night, John-Boy" :-)

Hi Kristy, this post was a blast to write. ;-) The Tequila Sunrise is a nice drink - it should become more popular again. Thanks for your comment.

Oh my, the colors are absolutely stunning! Oh yes, I want one too! You two are one great couple, I am still giggling over your post! :) Thanks, it made me feel very ... happy! :)

Hi Marina, Mrs K R and I have lots of fun — the posts where she's included pretty accurately reflect that. Thanks for the kind words, and the comment.

Great fun post! And I've never had one with fresh oj which sounds really good. And I do have creme de cassis. I used to use it to make Kir which was also back in the day. Peace.

Your pictures and description makes me want one of these right now. It's gorgeous in that tall Collins glass. I must check out your homemade grenadine too :)

Love this. Well, almost anything with Tequila is a winner in my book. Great post!

Hi This is How I Cook, I remember Kirs. It's been ages (the 90s) since I've had one. Good drink. Thanks for stopping by!

Hi Biren, it's a pretty drink - tastes pretty good, too. You'd enjoy it. Thanks for your comment.

Hi everdaymaven, tequila is good stuff, though it can be a bit rough. But properly tamed, it's superb. Thanks for your comment.

You're right, this took me on a trip down memory lane. I haven't heard them mentioned in eons. But you can not deny the beauty of the creature. They definitely look like a glorious sunrise.

Hi Suzanne, an oldie but a goodie! It's actually a decent drink and wroth drinking on its own, but for the memories? Priceless. Thanks for your comment.

Your pictures are just gorgeous! I was just outside, and it was deceivingly cloudy, but SO hot. I would be up for this!

I've actually never sipped one of these. But I do love the old Eagles song of the similar name. ;)

Hi Cathleen, it's hot across so much of the US at the moment. And this is indeed a nice, cool antidote to the heat! Thanks for the kind words, and the comment.

Hi Carolyn, it's a fun drink. If you ever throw a 70s party, you'll have a drink to match the music. ;-) Thanks for your comment.

I feel old fashioned when I drink one of these but I do like them. Borderline girly but good. :)

Hi Maureen, ;-) This is a borderline girly drink, particularly when garnished with an umbrella. But as you say, it's pretty good. Thanks for your comment.

I love the colours in this drink, always a stunning picture. I really want to try making this drink with the homemade grenadine, I seen that post as well, and never realized it was so simple to make. Great post thanks for sharing.

The picture had me my friend - I officially hire you as my drinks maker during my 18th ;)
You are stunningly talented!

I am not a fan of the tequila sunrise, mainly because I am not a fan of tequila...but your photos are stunning and immediately made me want to try one! ...Will have to wait for Dry July to be over and I may have to scour your archives for a worthy celebration drink!

Hi Alessandra, it's one of the prettier drinks I know. Flavor is decent too - what a combo! Thanks for your comment.

Hi Choc Chip Uru, I'd be delighted to be your drinks maker when you're legally able to drink! Thanks for the kind words, and the comment.

Hi Ali, I admire what you're doing this July. Either the Champagne Cocktail or the Bellini would be pretty celebratory, although if you want something with a bit more kick to it, there are plenty of other worthy drinks out there. Thanks for your comment.

I was introduced to the tequila sunrise in the 90s. It was one of my first 'legal' drinks! I didn't know about the other, original, version with no orange juice. I love the color of the orange juice, though.

Hi Lisa, I didn't know about the earlier version either, until I started doing some research on the drink. I don't think it really ever caught on, unlike the current OJ version. Thanks for your comment.

I want that right now! So summery, colorful and beautiful.

Oh how wonderful to learn that the 24th is National Tequila Day! Great reason to make a beautiful drink like this! All the social events going on, drink recipes are perfect toward the weekend! I definitely love your black background photo... The bright colors just stand out beautifully!!

Hi Rosa, well, I think you should have one right now! :-) Thanks for taking time to comment.

Hi Nami, I'm such a sucker for black backgrounds - they do make the subject pop. Besides, they focus attention on the drink or food, which is what's really important! Thanks for your comment.

Love the bright colours of this cocktail! Very cheerful and summery!

I can dig it. You are rocking the cocktails. Is it sad to say I loved the movie of the same name? Ya, forget I said that.

Didn't know about the 24th, but now I am definitely going to be ordering a Tequila Sunrise on the 24th! I'll be with some people that will remember this drink! Or maybe not. :) I didn't know there was earlier version. It sounds good too! Your pictures look just like the ones I use to drink. Thanks for the stroll down memory lane.

Hi Zoe, I agree - this has summer written all over it. Really fun drink. Thanks for your comment.

Hi Kim, ;-) I don't think I've ever actually seen that movie. I should check it out on Netflix. Thanks for your comment.

Hi MJ, they'll definitely remember it when they see it - who could forget it? Thanks for your comment.

Hi Words of Deliciousness, they are really good, aren't they? Thanks for taking time to comment.

Oh no, I yelled "John boy" & "right on!" AND I do know this drink for sure:-) I love your addition of your homemade grenadine, that would make it outta sight my friend:-) Take care, Terra

Hi Terra, ;-) The 70s were a hoot. And the homemade grenadine really does make this drink far out! Thanks for the comment.

I remember the movie with Mel Gibson and Michelle Pfeiffer. What a great drink. Don't you just love the colour of it. Stunning xx

Oh my, even though I don't really like tequila, your photos are so amazing that I really want Yuye to make this for me now. :P Look at that fantastic colour! I'm mesmerised!

Hi Hotly Spiced, I need to see that movie - not sure I actually ever saw it. And I agree the color is wonderful. Thanks for your comment.

Hi Jenny, this drink is all about color - and it's one of the prettiest I know. So much fun to drink for that reason. Thanks for the comment.

This is such a stunning cocktail! Tequila isn't my favorite, but I think I'd enjoy this cocktail anyway. Beautiful photos!

Hi Jeanne, unless you really dislike the flavor of tequila, you'd probably enjoy it in this drink (the flavor of the tequila is toned down considerably, although you certainly still taste it). It is really pretty, isn't it? Thanks for your comment.

YUM! I'm loving the look of this one. I think I need to put my partner in touch with you so that when I return home on a Friday evening he can have one of these waiting for me! :)

Hi Amanda, it's a fun drink, and so colorful. Perfect way to start the weekend! Thanks for your comment.

Great pics, great post. I am going to add this to my Mouth Watering Mondays post this Monday. Come on over to see it at www.noshingwiththenolands.com Cheers, Tara

Hi Tara, I' delighted you've chosen this to include in your Mouth Watering Mondays post this week. Thank you. And thanks for taking time to comment.

Super groovy! Now that I know what's in a Tequila Sunrise, I'm more likely to drink it! I'm a little younger so this drink always reminds me of the movie, with the same name... when Mel Gibson was hot and before he lost his marbles!

Hi FamilySpice, I really need to check out that movie! It's a good drink - certainly worth trying. Thanks for your comment.