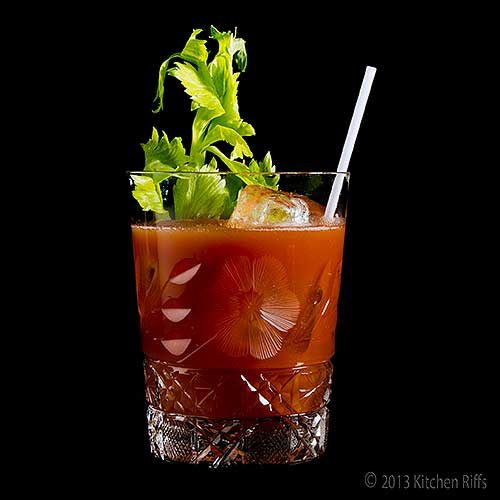 If you’ve ever gone out for brunch on a weekend, chances are you’ve seen a Bloody Mary (or several) being consumed.  This piquant mix of tomato juice and vodka is a forenoon favorite in the US — and throughout much of the world.

And why not?  The Bloody Mary delivers a bit of a kick, but all that tomato juice gives you maximum beverage volume with minimal alcohol.  Plus, the drink holds its own against the assertive flavors of common brunch fare like bacon, sausage, and eggs.  In fact, its taste is so robust that people rarely want more than one.  So you won’t get blotto at breakfast.

The Bloody Mary is an easy drink to make at home when you host a big brunch.  It also practically cries out for customization:  You can spice it up or down to suit your own preference.

Once you’ve developed the perfect recipe, you may find yourself inviting people over for brunch more often.  Just so you can bask in their satisfied smiles as they sip your expert concoction. 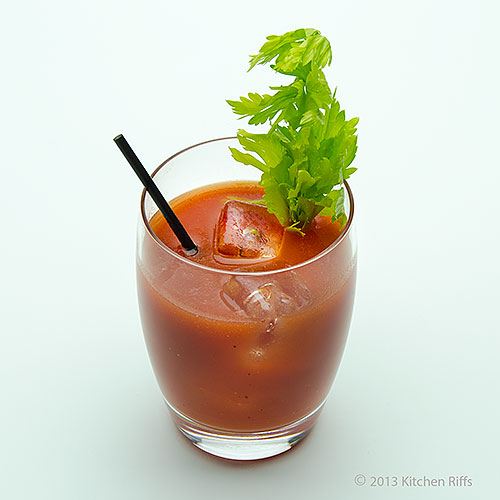 A Bloody Mary always contains tomato tomato juice and vodka, and usually Worcestershire Sauce and lemon juice. After those basics, ingredients can vary. Common additions include Tabasco sauce, salt (often celery salt), black pepper, and (sometimes) horseradish sauce. This is a drink that you want to experiment with, because everyone likes a different level of spiciness. I’ll provide a recipe that you can use as a template, and discuss some variations in the Notes.

The Bloody Mary is famed as a “hair of the dog” remedy (meaning that if you consume too much alcohol the night before, it’s supposed to help assuage your pain the next morning). In truth, adding more alcohol to an already overloaded system isn’t a good idea. But at least the tomato juice will help hydrate you, and it will add some badly needed vitamins.

BTW, the Bloody Mary can easily be adapted for nondrinkers or children: Simply leave out the vodka and you’ll have a Virgin Mary. Vodka provides no flavor (see Notes), so this mocktail is every bit as delicious as the actual cocktail.

A Bloody Mary is usually served on-the-rocks in an old-fashioned glass or in a tall (Collins) glass. The recipe takes 5 minutes to prepare, and yields one drink. 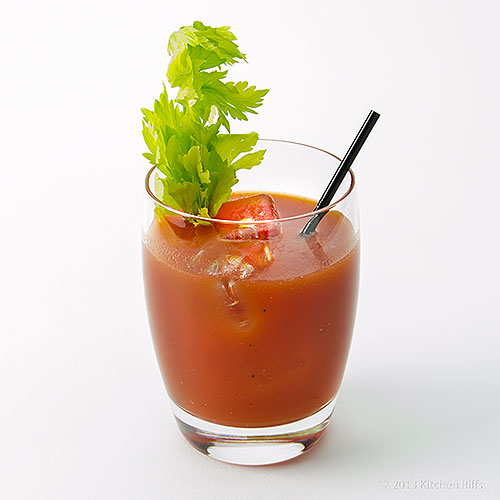 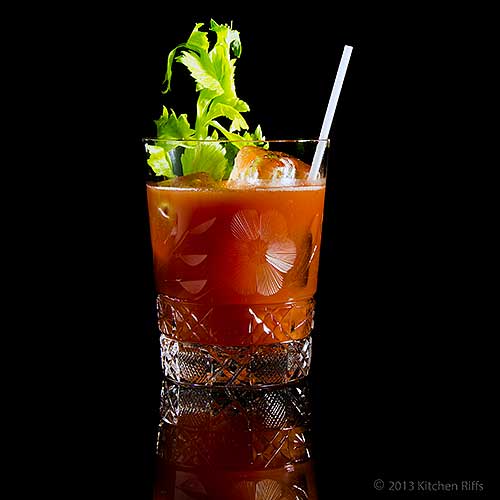 No one is quite sure where the Bloody Mary originated.  As is the case with many classic cocktails, its origins are murky. In The Joy of Mixology, Gary Regan recounts the most widely accepted story, which says that the drink was invented by Fernand “Pete” Petiot at Harry’s Bar in Paris, sometime around 1924. Harry’s was one of the bars where Ernest Hemingway used to hang out (is there any bar where he didn’t?). So he probably sampled Petiot’s creation (is there any drink Hemingway didn’t sample?).

Back then, the Bloody Mary was probably quite different from today’s drink. It most likely contained equal parts of tomato juice and vodka shaken together with ice, then served straight up in a cocktail glass. It may have included some lemon juice, but no Worcestershire, Tabasco, or anything else.

Petiot was hired to run the King Cole Room at New York’s St. Regis Hotel in 1934. That’s probably when the Bloody Mary reached the US (although some people reject the whole Petiot story, and claim the drink was actually created at a New York speakeasy during Prohibition). The owner of the St. Regis, John Astor, objected to the drink’s name, so it was called the Red Snapper for a while. According to Regan, the original name returned sometime in the 1940s. And eventually, the Bloody Mary evolved to become the spicy concoction we enjoy today.

The drink did not gain wide popularity in the US until the 1950s. That was the era when Americans were becoming acquainted with vodka, helped in part by a Smirnoff ad campaign featuring the entertainer George Jessel. Jessel also claimed to have invented the Bloody Mary (supposedly at 5 AM “when the bartender was asleep”).

Once Americans discovered the Bloody Mary, they adopted it enthusiastically. And over time, variations of the drink proliferated: Substitute beef bouillon for tomato juice and you have a Bull Shot. Use Clamato and you have a Caesar (or a Bloody Caesar, Bloody Clam, or Clammy Mary). Pineapple Juice? That’s a Commander White. Replace the vodka with sherry? You get a Bloody Bishop. If you use bourbon, it’s a Bloody Derby. You can even use bacon vodka (this actually exists!) and have a Bloody Hogger. And, BTW, there is another drink today that’s called the Red Snapper — it uses gin instead of vodka.

There are more, many more. But I think the classic formula is the best. So that’s what you’ll find me drinking — especially at a big Sunday brunch.