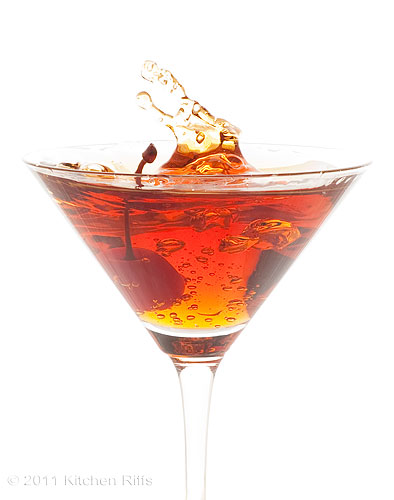 Is This All-American Classic the World’s Best Cocktail?

Cocktails are an American invention, and one of the best-known is the Manhattan.

No one can say with certainty where or when the Manhattan was first concocted, although cocktail historian David Wondrich says ”its roots stretch back to the old Manhattan Club, in 1874.”

But there’s no controversy regarding the popularity of the drink. Cocktail aficionados consider it one of the finest ever conceived, and it’s on almost everyone’s list of best cocktails.

We’ll get into this whole “best” thing later. Right now, we have a drink to build! 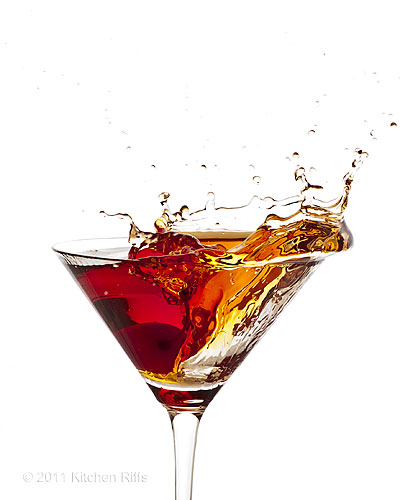 The original Manhattan was made with rye whiskey, and that is my liquor of choice for this drink. Today some people prefer bourbon, a sweeter whiskey then rye. Bourbon is good, in my opinion — but not as good as rye in this drink. More about whiskey choices in the Notes.

Bitters (preferably the Angostura brand) were an important ingredient in the original cocktail, although today some bartenders omit them (assuming their clients prefer the drink without). But this is faulty thinking — the same kind that leads many bartenders to omit dry vermouth in the Dry Martini. The Manhattan Cocktail loses much of its soul without bitters. So if you don’t have bitters on hand, make yourself a different drink.

This recipe serves one. The proper ratio of rye to sweet vermouth is 2:1, so you can easily scale up this recipe to serve to a crowd.

Ingredients
Procedure
Why Stir Rather Than Shake? 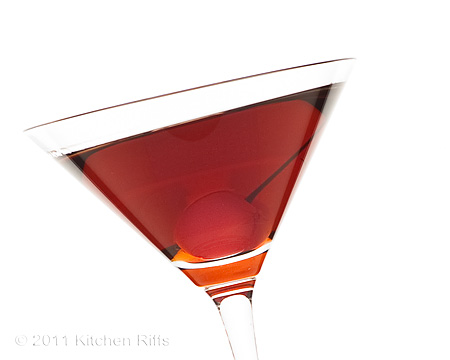 Speaking of the Martini, it — rather than the Manhattan — is probably the best-known cocktail today. The Dry Martini is also probably the Manhattan’s fiercest challenger for the title of “best” cocktail. But the Martini’s rise to prominence may be something of an accident, driven by Prohibition.

Before Prohibition, whiskey-based drinks were America’s favorites. But whiskey needs aging, and Prohibition shut down all the commercial enterprises devoted to producing fine, aged whiskey. So whiskey became scarce. What was available had to be smuggled in (often from Canada).

As a result, gin (which requires no aging) became the favorite bootleg spirit of the speakeasy. Bootleg gin was easy to produce, it mixed well with other ingredients, and it tasted far better than bootleg whiskey. Thus, gin became the popular base spirit in cocktails, and the Martini became one of the most popular drinks.

Even after Prohibition ended, the Martini retained its popularity. It took some time for distillers to restore whiskey supplies (remember, whiskey needs to be aged), so Americans got in the habit of preferring drinks made with gin (or sometimes rum). By the time rye and bourbon became widely available again, the nation’s taste had shifted to less distinctively flavored spirits.

So, Which Is the Best?

So the Martini is better known. But what about my suggestion that the Manhattan is the “best” cocktail? Both the Martini and the Manhattan feature an illustrious liquor mixed with vermouth and bitters (if you don’t think a Martini needs bitters, you should read about the Dry Martini).

Both cocktails offer distinctive flavors, both are easy to mix, and both just plain taste good. Of the two, however, I think the Manhattan has the more interesting flavor, which is why I would hand it the prize.

The Manhattan Cocktail also has a warming effect, which makes it a better cool-weather drink. The Martini, though somewhat less interesting overall, probably offers better refreshment during warmer months.

So as we head into winter, you can look forward to the perfect weather for consuming the world’s best cocktail. You may be shoveling snow and scraping ice, but at least you won’t have to compromise on the quality of your drink.

The Dry Martini Cocktail
The Pegu Club Cocktail
The Gin and Tonic
The Classic Daiquiri
Posted by Kitchen Riffs at 9:45 AM