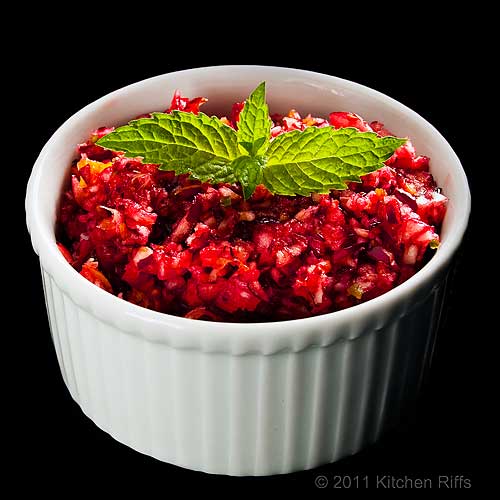 Spice Up a Traditional Thanksgiving Favorite

Thanksgiving dinner may be the most traditional, never-changing meal of the year.

Turkey. Dressing. Gravy. Mashed Potatoes. A Sweet Potato Something. A Cranberry Something. A Green Veggie Something. Add Biscuits, Pumpkin Pie, a nice wine (Beaujolais Nouveau for me), and whatever else is in your family’s repertoire.

We may tinker with the menu occasionally, but we usually revert back to our traditional dishes.

Still, if you’re looking for a new riff on an old favorite, why not consider adding a jalapeño pepper (or two) to your cranberry relish?  The dish won’t be much hotter (unless you want it to be) and it takes little extra preparation time.

Best of all, you’ll have everyone at the table trying to guess why this year’s cranberry relish tastes so much more interesting than last year’s! 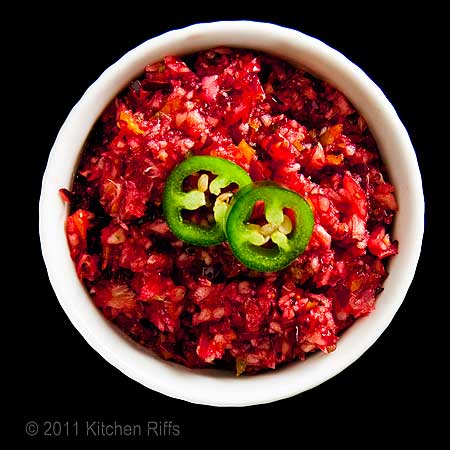 Most recipes for Cranberry Relish are quite similar:  Throw a package of cranberries into the food processor with a peeled, cut-up orange.  Whirl until finely minced, then mix in some sugar.  My mother always added apple to hers.

I don’t use the apple, but these days I often add ginger and cayenne pepper (spicy and sweet is a great combination).  Sometimes – as in today’s recipe – I substitute jalapeño pepper for the ginger.  This is a common variation in the southwestern United States.

This recipe makes about a quart, which I usually figure serves 8 to 12 (some people take only a dab of this dish).  Leftovers freeze extremely well.  You can also make this recipe ahead of time, freeze, and then thaw on Thanksgiving Day. 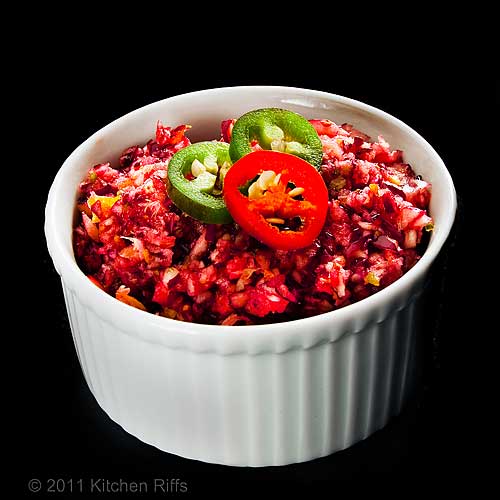 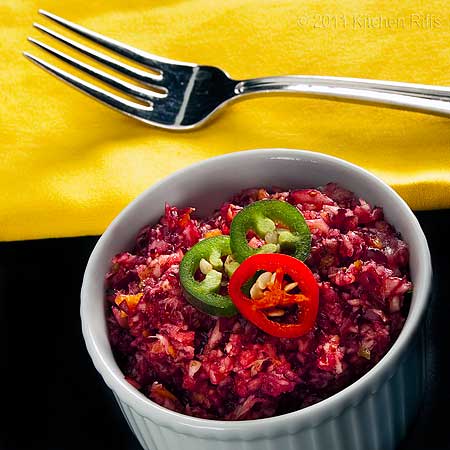 Although jalapeño peppers aren’t a traditional ingredient in Cranberry Relish, the “ping” they add is interesting enough that most people will enjoy the departure from the usual. But you have to be careful when you start messing with traditional recipes, especially on a holiday like Thanksgiving.

There are three major Thanksgiving cranberry traditions in this country: Cranberry Relish (of the type featured here), Jellied Cranberry Sauce, and Cranberry Jell-O Salad. Some people will eat any cranberry variation happily. Others insist that the variety they grew up eating is the only version worth having.

Cranberry Relish, as you’ve probably figured out, was always on the Thanksgiving table when I was growing up. At Mrs. Kitchen Riffs’ childhood home, it was a Cranberry Jell-O salad. So how do we handle this? Sometimes we just make one or the other. Many years, we make both.

Why both? Well, recall my discussion about the passionate preference people hold for either Hellman’s Mayonnaise or Miracle Whip in American Potato Salad. We acknowledged then that some compromise is necessary in a culinary mixed marriage. At least if you want to live happily and peacefully.

Let the record show that Mrs. Kitchen Riffs and I live very happily and peacefully!

This looks fresh and yummy and soo pretty. And you always give the most wonderful details. I do a berry sauce with a touch of chipotle. It gives the cranberries a bit of a smoky, spicy taste. But jalapeno, well, I've never met one I didn't like! Happy Thanksgiving!

Looks delicious ... I'll definitely be giving this one a try! Happy Thanksgiving!

@Abbe, thanks! it really is good. Chipotle sounds excellent - I'll give that a try sometime. Happy Thanksgiving to you! Thanks for stopping by.

@Kimberely, Happy Thanksgiving to you! And I hope you do give it a try - I think you'll enjoy it. Thanks for the comment.

I can just imagine how lovely the slight spice plays with the sweet-tart cranberries. This recipe is worth changing tradition for! I've been sad that it's near impossible to find cranberries in Israel, so I'll have to bookmark this for another year!

Hi Katherine, it's a great combo of flavors. Bummer you can't find cranberries in Israel (now that I think about it I realize it'd be tough to replicate the ideal growing conditions there), as you say, in the future you can enjoy them. Thanks for stopping by.

I have seen a similar recipe, but the liquid and sugar are brought to boiling, then poured over the chopped cranberries. Yum. Has anyone seen that recipe? My copy was destroyed by a cat.

Hi CMack, thanks for stopping by. Most Cranberry Sauce recipes call for heating some water & sugar (and some call for a spirit like bourbon or rum!) as one of the steps in the recipe. I haven't made Cranberry Sauce - I probably should - but I was under the impression that you also added the cranberries to the liquid and simmered for a period of time. But there's probably a version out there where you just dump the hot sugar mixture over the cranberries - then I guess it would be kind of a mix between Cranberry Sauce & Relish. Anyway, I'd Google cranberry sauce recipes & see if you find something similar to your lost recipe. Happy Thanksgiving!

What an inspired combination!

Hi Beth, a delicious combo, too! If you like spicy at all - and cranberry - worth trying sometime. Thanks for your comment.

I love the sound of this and it's different than the typical holiday cranberry sauce. This one has a bit of a kick. I'll have to try this one before next year for sure.

Hi Vicki, it does have some kick, but it's mild (unless you add extra jalapeño or cayenne). It's really delicious! Hope you enjoy it. Thanks for stopping by.

Hi Natalie, it is great! Also good with ginger. Thanks for the comment.