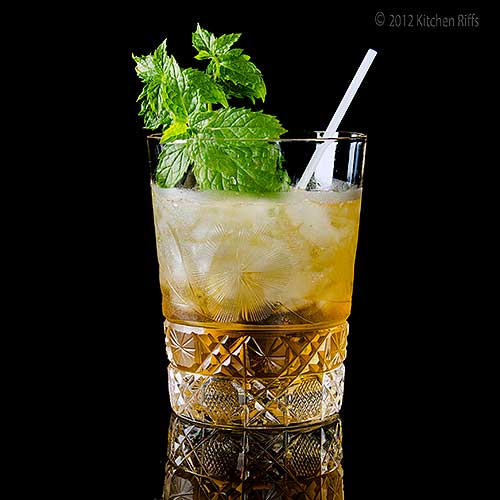 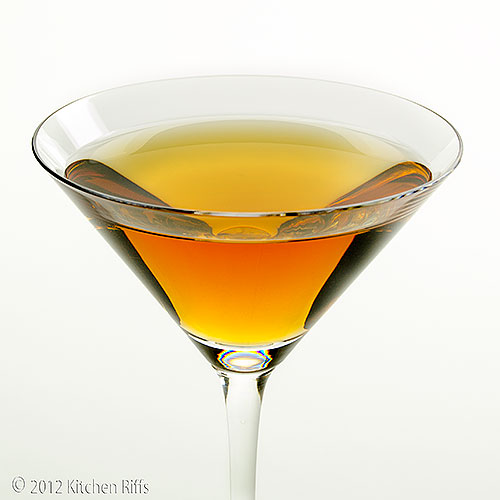 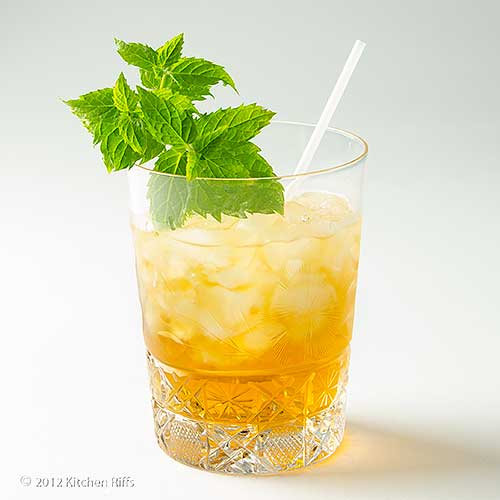 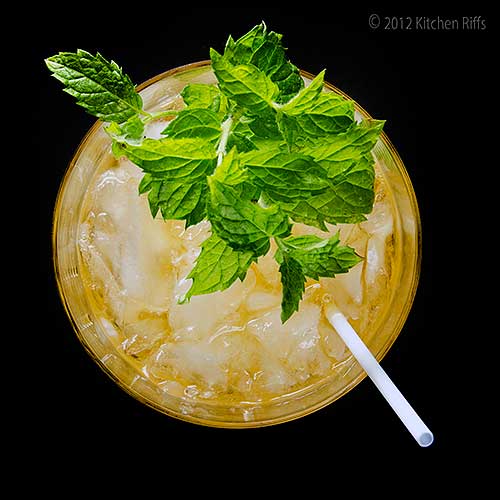 Beautiful glass and photo! I always learn so much from these posts - thanks :)

Always in awe of your beautiful photography!! And the mint is a very nice touch, I would definitely add it =)

Sting away! I vote for the lime juice, too!

I love the cut crystal glass - it reminds me of one my grandfather always used for his evening drink of whiskey. I'm not surprised Reggie died of cirrhosis, just a shame he was so young.

Hi Alyssa, thanks for the kind words, and the comment.

Hi Natalie, if you like crème de menthe you'll definitely want to taste this cocktail! Thanks for the comment.

Hi Kristi, we're lucky that the weather in St. Louis has been warm enough that we still have quite a bit of fresh mint in our garden. So using it as a garnish was a no brainer. ;-) Thanks for the kind words, and the comment.

Hi Abbe, the lime juice really adds a degree of complexity that I find quite appealing. But as I said, I really do like lime juice. ;-) Thanks for the comment.

Hi Suzanne, that glass is at least 100 years old — it belonged to my mother's grandmother (or maybe even her great-grandmother). And I agree it's too bad what Reggie did to himself. Thanks for the comment.

What a stunning photograph! I remember ... long ago in the 70's - stingers being quite popular during my salad-waitress days. I also remember enjoying them and haven't thought about them in - well - decades. What a lovely blat from the pat and sweet stories that accompanied this post.

I want to share the fun with you and Mrs. Kitchen Riffs! Happy holidays! :)

This sounds mighty tasty. You are the man for sure when it comes to cocktails. What will you be mixing up for Christmas!

Hi Claudia, this is indeed an oldie but a goodie! Thanks for your kind words, and your comment.

Hi Judy, the lime juice really does add a nice extra dimension. Thanks for the kind words, and the comment.

Hi Kristi, Mrs K R and I do have a lot of fun, and you'd certainly be welcome! Happy holidays to you, too, and thanks for commenting.

Hi Vicki, it really is a tasty drink! Who knows what we'll decide to have for Christmas?! Thanks for the comment.

Hi Marina, no one quite knows how it got its name, but the "sting" comes from the unexpected little tingle on your tongue from the crème de menthe. It's definitely a drink worth trying. I can't believe we still have mint in our garden at this time of the year; it's even survived some pretty heavy duty frost (although it's growing in a protected place). Thanks for the comment.

It's been years but once upon a time, a Stinger was my cocktail of choice, especially this time of year -- but never with green crème de menthe. Could not abide a green tongue. :)
I'd no idea about adding lime juice, though, John. I may have to buy myself some white crème de menthe and do some experimenting of my own. Thanks for the recipe and inspiration, from one scientist to another.

What a beautiful picture and the Cocktail looks so classy! I love to hear about its history and "historiette" behind it. Congrats!

Hi John — or should I say fellow scientist? ;-) — since you once drank this on a regular basis, you know how good it can be. I really like the addition of lime juice and since you like the cocktail I think you'll find it's an interesting variation. But again, I really like lime juice so I guess I'm predisposed to enjoy anything made with lime. Not very scientific, huh? ;-) Thanks for the comment.

Hi Daniela, glad you enjoy both the history and historiette. ;-) One of the most fascinating things about cocktail — and the reason I became interested in them — is so many of them have such color stories that surround them. Oh, and they taste good, too! Thanks for the kind words, and the comment.

I didn't know anything about this drink, and you've filled in a lot of history for me. Thanks!

Hi Beth, it's a pleasant cocktail. And I always enjoy discussing history of things! Thanks for the comment.

Marta @ What should I eat for breakfast today said...

Drink with a history :) sounds delicious! I need to organize some ideas for NYE and this is the first one on a list.

I love reading your conversation...and giggled at the part about not wanting to end up like ol' Reggie. Your middle photo is just gorgeous...I must try this sometime...I just can't imagine the taste of minty cognac.

If I drink a lot of these, will I get to be part of the limousine set? LOL

Hi Marta, it's a fun drink, so I'm sure many would enjoy it for NYE. Thanks for the comment.

Hi Lizzy, it's an interesting drink, although you do need to get the ration of ingredients right for your own taste, IMO. Glad you enjoy the conversations! Thanks for the comment.

Hi Carolyn, maybe! Worth a try. ;-) Or perhaps not - look where it got Reggie! Thanks for the comment.

Hi Dawn, it's a fun cocktail, that's for sure. Thanks for the comment.

Hi Gourmantine, it is! It is! ;-) Thanks for the comment.

It looks so fancy! And the glass that you served it in is exquisite. I feel like I've been transported back in time!

Hi Jeanne, it is kind of a fancy looking drink, particularly if you serve it in a nice glass. Best of all, it's pretty tasty, too! Thanks for your comment.

The color of this drink makes me want one. What a lovely cocktail! I love the simplicity of this drink as well. Thanks for providing another cocktail idea that uses up some of the creme de menthe from the grasshopper! I hope you and Mrs. KR have a wonderful holiday season! See you next year!

Hi MJ, I figured I owed everyone another way to use crème de menthe — its uses in cocktails is somewhat limited! I hope you have a terrific holiday too. Thanks for commenting.

I've heard of a stinger but never had one. I like lime as well so I think I would probably like your last version. The drink looks wonderful in your beautiful old glass...cut crystal is so pretty.

Hi Karen, this is a fun drink. The lime really adds quite a bit, IMO. And I agree that cut crystal is good stuff. Thanks for the comment.

Hi Christine, thanks for the kind words, and the comment!

You are my cocktail and general alcohol expert in my book! I am certain that I have never heard of the Stinger before. It sounds interesting though! I ll ask my husband if he can make it one of these days. =) thanks for sharing!

Hi Helene, it's an interesting drink! Although it's one of those drinks that I enjoy once or maybe twice a year - it's not a regular. Thanks for the comment.

We went to a party yesterday and the host was making cocktails, so I mentioned your blog (with lots of delicious cocktail options). ;) It's nice to know you are keep adding menus in your blog!

Hi Nami, that was so kind of you to mention my blog! Thanks for that. Oh, and for commenting, too! ;-)