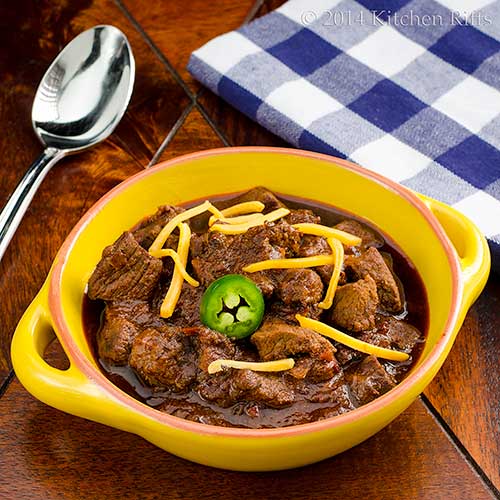 Warm up with a meat-based classic

With autumnal equinox receding in the rear-view mirror here in the Northern Hemisphere, we’re entering a period of chilly (not to mention gloomy and rainy) weather. Which is good news, in a way. Because chilly season means chili season.

During the cooler months, we have chili frequently—at least once a week. And although we make chili using all sorts of ingredients (including a mean vegetarian Sweet Potato Chili with Black Beans), there’s something special about a chili that’s heavy on the meat.

And when it comes to meatiness, nothing beats Texas chili. It typically contains loads of meat and chilies—and not much else. Just the thing to take the chill off. 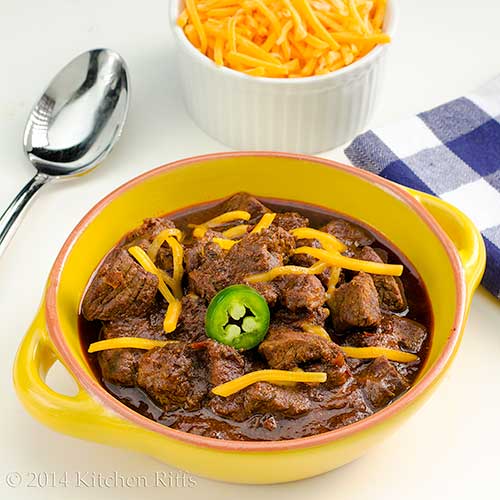 Chili con Carne means chile (peppers) with meat. So technically, we should call this dish Chile (with an e) con Carne. But because the dish itself is called “chili,” we’re going with that usage. (For more on terminology, see the first Note below.)

In a state as vast as Texas, no single chili recipe can be considered “the” authentic one. The varieties of chile peppers used in west Texas differ a bit from those used in east Texas, for example. But there is one constant: Traditionally, Texas-style chili contains no beans (though you’ll sometimes find Texas chili served over beans).

Some purists also say there should be no onion or tomato in Texas-style chili. Frank X. Tolbert has an excellent recipe for just such a spartan chili in his book, A Bowl of Red (a history of Texas chili).

But we’ve lived in Texas ourselves—and can report that we were served plenty of chili that contained onions and/or tomatoes. Even Lady Byrd Johnson’s recipe for Pedernales River Chili contains both these ingredients.

What really distinguishes Texas chili from most other kinds is the minimal liquid it contains. It’s not at all soupy, so the flavor of the meat dominates.

Our recipe contains onions (and some garlic), but no tomato. But feel free to substitute tomato for beef broth if you wish—that makes a really good variation.

Active prep time for this recipe is 45 minutes or so. Cooking time adds at least another 2 hours (most of it unattended).

This recipe yields 6 to 8 servings. It’s easy to double the amount if you’re feeding a huge crowd (this dish is excellent for a football tailgate, BTW). If the recipe makes more than you can use at one time, leftovers freeze well.

This is a great make-ahead dish. The chili gains flavor if it spends the night in the refrigerator, and is then reheated the next day. 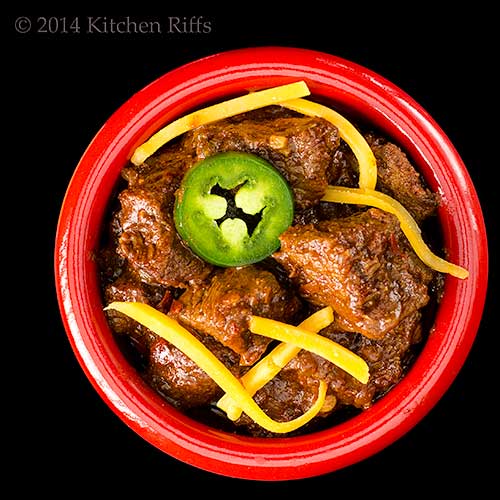 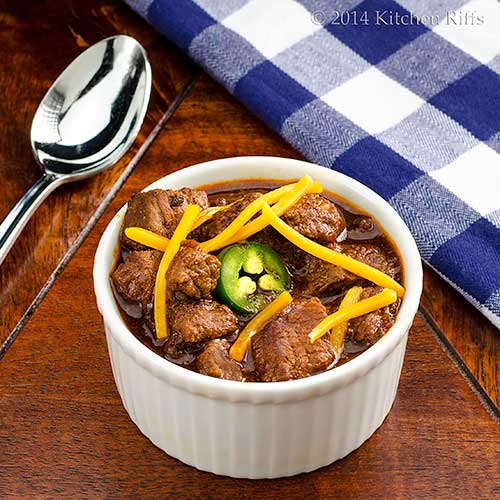 “It’s a perfect dish for watching football,” I said.

“Too bad your favorite teams are the St. Louis Rams and the Tampa Bay Buccaneers,” said Mrs K R.

“Yes,” I sighed with resignation. “They’re both in a race to the bottom.”

“Especially with a brewski or two,” I said.

“Or maybe a slug of whiskey,” said Mrs K R. “Judging from what I saw of the most recent Rams game.”

“Now, now, don’t be dejected,” said Mrs K R. “Maybe you’ll get lucky next time and the Rams’ defense will decide to show up for the game.”