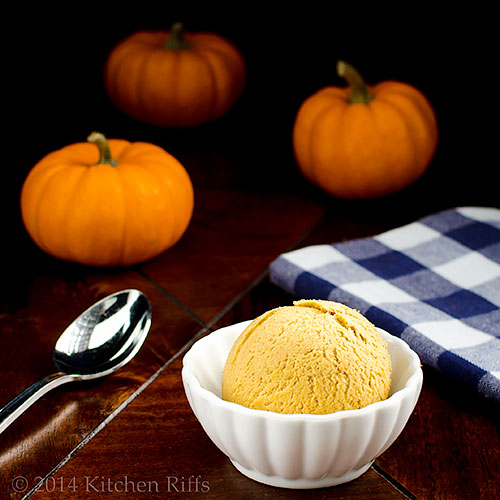 Its pie-like flavor is no trick, just a (luscious) treat

This time of year, we love to use one of our favorite autumn ingredients: pumpkin. You know, the big orange squash people use to make pumpkin pie.

Which reminds us: A while back, we discovered a way to make ice cream without churning—and using no special equipment except our trusty stand mixer. It’s a quick and easy method that produces better ice cream than anything you’re likely to buy in a carton.

So of course, we couldn’t resist adapting it to make this terrific tasting No-Churn Pumpkin Spice Ice Cream. Just in time for Halloween. Boo! 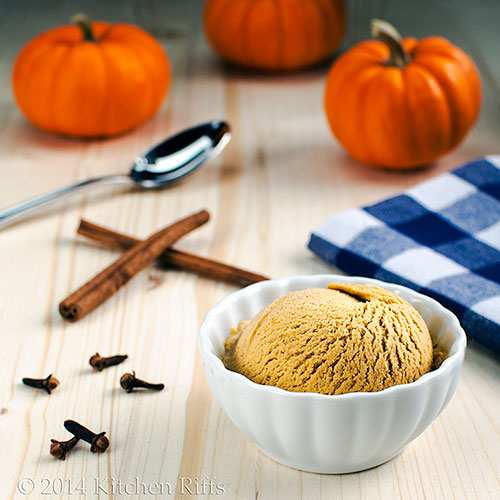 The recipe is cream-rich, so it’s not diet food. But it’s so luscious, you’ll probably be satisfied with a smaller amount than you usually eat. It also uses sweetened condensed milk, which is just regular milk with much of the water removed and sweetener added. Milk and sugar are common ingredients in ice cream making, so using sweetened condensed milk is a quick way to mainline those ingredients into your ice cream base.

This recipe requires you to whip cream, which is easiest to do if you have a stand mixer. A hand mixer will work, but it takes longer. After you mix the ice cream, you’ll need to freeze it for several hours to develop proper consistency.

Mrs. Kitchen Riffs makes most of the sweets at our house, and this recipe is her creation. She adapted it from a recipe she found in 100+ Luscious Ice Creams without a Machine, an e-book by Suzy Bowler.

This recipe takes only about 20 minutes of hands-on time. But it requires you to cook a pumpkin mixture—and that will need to cool for an hour or more before you add it to the whipped cream. Then you’ll need to freeze the ice cream for at least 4 hours (maybe more, depending on your freezer temperature). BTW, you can cook the pumpkin mixture ahead of time and refrigerate it until you’re ready to mix it into the ice cream.

This recipe yields about one quart, though it can easily be scaled up or down. 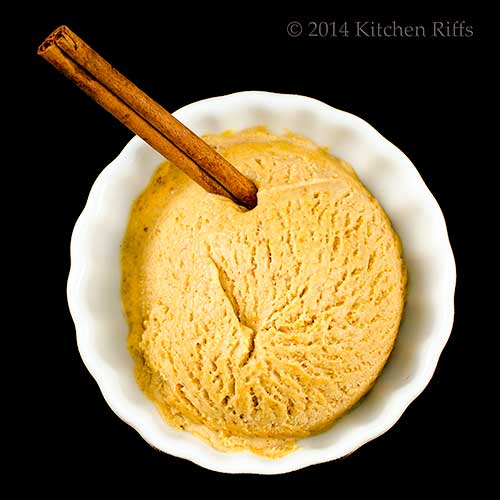 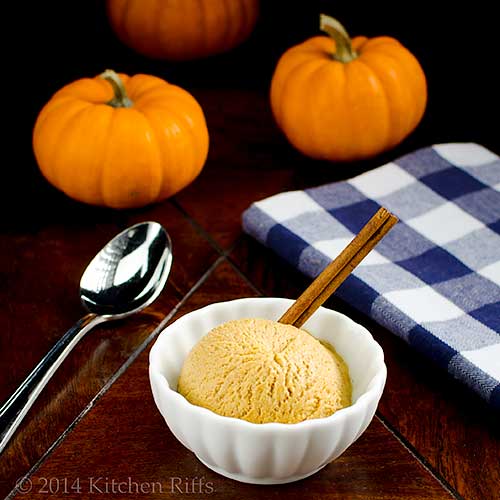 “Wowzer,” I said, dipping a spoon into my dish of ice cream. “This totally tastes like pumpkin pie.”

“Thanks, that was the idea,” said Mrs. Kitchen Riffs.

“It’s perfect for Halloween,” I said.

“I don’t think I can wait that long before having another serving,” I said, eyeing the container. “Any chance you could scoop up seconds?”