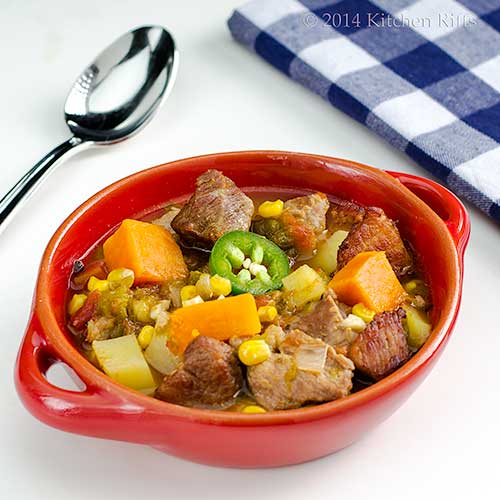 Green Chile Stew with Pork (aka Chile Verde) is one of the best-known dishes in New Mexico. And while it’s a meat-heavy dish, the flavor is all about the chilies.

More about chilies later. Right now, all you really need to know is this: When the weather turns cold, nothing heats you up better than a steaming bowl of Green Chile Stew with Pork. 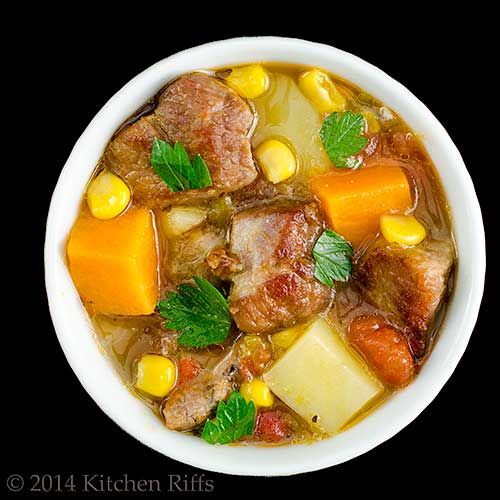 Some of the world’s best green chilies are grown in New Mexico’s Hatch Valley (which runs along the Rio Grande north from the town of Hatch). Hatch chilies are named after the town, BTW; they’re not a separate variety of chile. They are essentially the same variety as Anaheim chile peppers, but the New Mexico chilies have been developed to be hotter and more flavorful than the Anaheims we buy in the supermarket.

For this recipe, we used frozen roasted and peeled Hatch chilies that came from the Hatch Chile Store. Disclosure: They sent us a complimentary 5-pound box of frozen chilies. We almost never accept freebies, but Hatch chilies are something we’ve used and loved for years, so we couldn’t resist the offer.

If you can’t find Hatch chilies, worry not. Anaheims have good flavor, and they’re available in every supermarket, so you can substitute those. Anaheims are fairly mild, though, so you may want to use more than our recipe specifies. You might also want to add extra jalapeño peppers. If you prefer not to use fresh or frozen chilies, you can substitute canned green chilies.

This recipe is adapted from one we found in Jeff Smith’s The Frugal Gourmet Cooks American. Another terrific recipe can be found at MJ’s Kitchen. (Check out her whole blog while you’re there—she does good stuff.)

Prep time for this recipe is about half an hour. Cooking time adds another 2 hours or more (most of it unattended).

This recipe serves about 8, and leftovers freeze well.

For the roasted fresh green chilies:
For the stew: 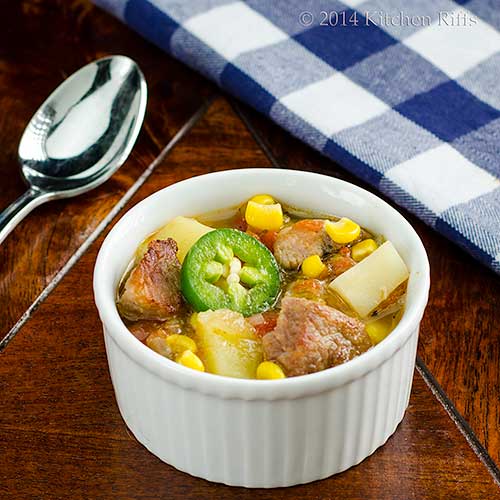 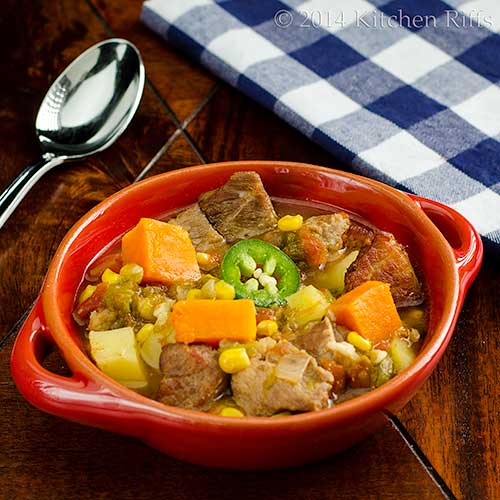 Have Stomachs, Will Travel

“Love this,” said Mrs. Kitchen Riffs, dipping a spoon into her bowl of Green Chile Stew with Pork.

“Those Hatch chilies are hard to beat,” I said.

“We really should travel to New Mexico one of these days,” said Mrs K R. “And experience eating these great chilies at the source.”

“We could go to the Hatch Chile Festival next year,” I said. “They hold it around late August or early September.”

“Sounds like fun!” I agreed. “And we can bring back a case or two of chilies.”

“Yup, and it would be the perfect time to go,” said Mrs K R. “Because the Santa Fe Opera runs through the end of August.”

“Right, I should have realized you’d know the opera schedule by heart,” I said.

“We could hit Santa Fe first and catch a few operas, then head to Hatch for chilies,” said Mrs K R. “Why, we could have weeks of fun in New Mexico!”

This might turn into an expensive bowl of stew.