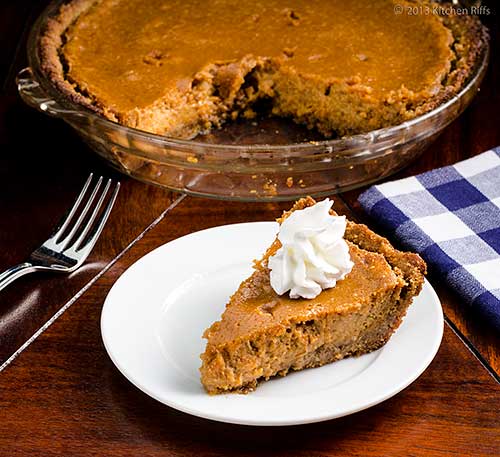 What’s for dessert this Thanksgiving? Pie, of course—why even bother to ask? And pumpkin will be the pie of choice for most households throughout the US.

But how about an alternative that’s even tastier? That would be Sweet Potato Pie, a favorite in the American South. Sweet potatoes have deeper, richer flavor than pumpkin. And our gluten-free walnut crust is both tastier and easier to make than the traditional pastry shell.

So welcome to the best Thanksgiving dessert. Ever. 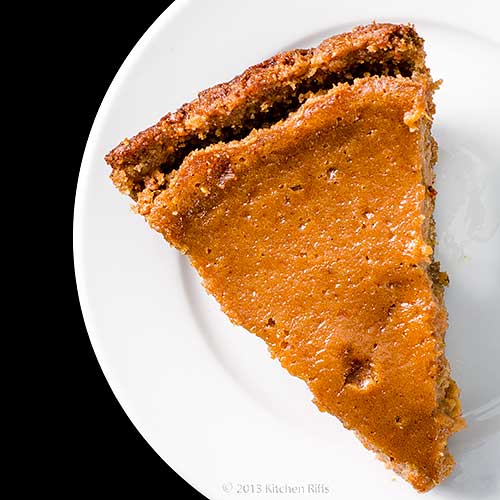 There are two types of sweet potatoes commonly found in the US. One has reddish brown skin and deep orange flesh, while the other has golden-toned skin and yellowish flesh. The first kind (which tend to be sweeter) are sometimes called “yams”—though this is a misnomer. Real yams are an entirely different veggie; they’re not even related to sweet potatoes (and they’re not easy to find in US markets).

Any sweet potato you’re likely to see in your local market should work in this recipe—which is quite straightforward, BTW. There are 3 major steps, none of them difficult. First, you need to make the crust and blind bake it (that is, bake it without a filling). Second, you need to cook the sweet potatoes and purée them. (We boil the sweet potatoes, but you could use another cooking method if you prefer; more on this in the Notes). Third, you need to mix the pie filling and bake the pie.

Mrs. Kitchen Riffs is the baker in our household, and this recipe is hers. The crust is the same one we used in our recipe for Lemon Cheesecake with Walnut Crust. If you prefer, you can substitute a pastry crust (your own or store bought). If you use a pastry crust, you can blind bake it or not—your choice. The filling for this pie was adapted from a recipe in James Beard’s American Cookery.

For the crust (makes one 9-inch crust):
For the filling:

For the crust:
For the filling: 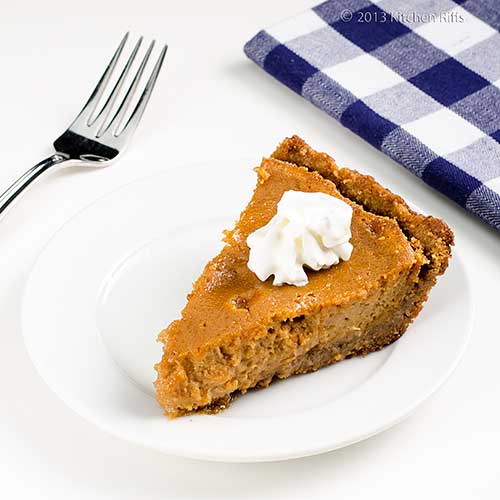 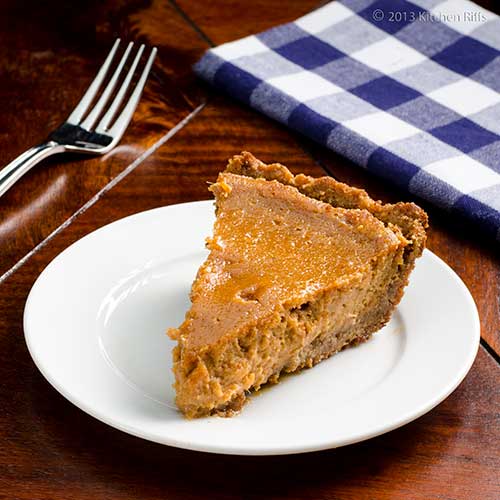 “I can’t believe I’m saying this, because I love pumpkin pie,” said Mrs. Kitchen Riffs. “But this Sweet Potato Pie is way better.”

“For sure,” I agreed. “Amazing that it’s taken us so long to perfect our own recipe for it.”

“Probably because pumpkin is so good,” said Mrs K R. “And there’s that tradition thing, too—including our own.”

“Easy to get stuck in a rut,” I said. “Say, remember the plan we talked about after our first piece of Sweet Potato Pie, way back when? The one we wrote about in our last post on Sweet Potato and Rosemary Casserole?”

“Yup, when we stopped in De Valls Bluff, Arkansas to try the great barbecue place that Jane and Michael Stern of Roadfood fame wrote about,” said Mrs K R.

“And across the street was the Family Pie Shop,” I added. “Another of their recommendations.”

“That’s when we realized what a great combo pie and barbecue make,” said Mrs K R. “And we decided that someday we should take a pie-and-barbecue tour of the US.”

“Yeah, traveling from coast to coast, stopping to sample pie and Q everywhere,” I said. “Too bad we never got around to doing that.”

“And as it happens, we can walk to a pretty good barbecue place in our current neighborhood,” I added.

“Maybe we should get some takeout for dinner tonight,” said Mrs K R. “And next time I bake Sweet Potato Pie, you can make your dynamite Oven Slow-Cooked BBQ Spare Ribs.”

Great idea. Sometimes the best roadfood is right at home.