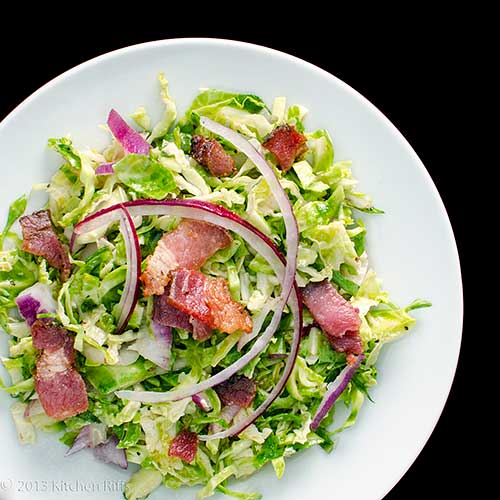 But wait. These little choux taste great raw. Just slice them thinly (it brings out their natural flavor) and toss them in something tasty. Like hearty hot bacon dressing, we would suggest. It’s particularly nice if you’re experiencing cool fall weather, as many of us are now in the US.

And if you’re having trouble selling some diners in your household on the whole idea of Brussels sprouts—well, just wait until they taste them in this robust dressing. You may make some cabbage converts. 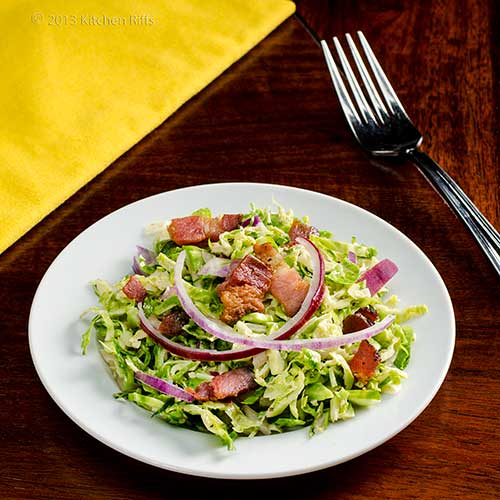 Lots of vegetables that are traditionally cooked (and served as sides) work well when “shaved” (i.e., sliced thinly or chopped) and served raw-with-dressing as first courses. Chopped Kale salad is a hot restaurant menu item these days, for example. Shaved Fennel salad is equally tasty. Shaved Brussels sprouts fit right into that trend.

The dressing we use here is the one made famous by the classic Spinach Salad with Hot Bacon Dressing.

Because this salad needs to be served while the dressing is still hot (or at least quite warm), you’ll want to toss it at the last moment. But you can do the most time-consuming part—shaving the Brussels sprouts—hours ahead if you wish. Just put the shaved sprouts into an airtight container after you cut them, and refrigerate until needed. See Notes for another tip about preparing the bacon ahead of time.

This salad tastes best if you shave the Brussels sprouts as thinly as possible (paper thin is great, but not necessary). Shaving them is easiest if you use a kitchen slicer or a mandoline. But be careful! Those blades are sharp. If your device has a guard, use it.

To slice with a mandoline, grab a Brussels sprout by the stem, and apply the tip of the sprout to the blade, slicing crossways. Keep slicing until you decide that the blade is getting too close to your fingers for comfort (you won’t be able to use the entire stem end of the Brussels sprout).

You can also slice Brussels sprouts with a very sharp knife (one with a thin blade is best). Just hold the Brussels sprout by the stem end and cut crossways, starting at the tip and slicing as thinly as possible. It’s easiest if you cut a small slice off one side first to form a flat base so the sprout doesn’t roll around.

Prep time for this recipe is 15 to 20 minutes, cooking time another 15 or so.

This recipe yields 4 to 6 first-course servings. 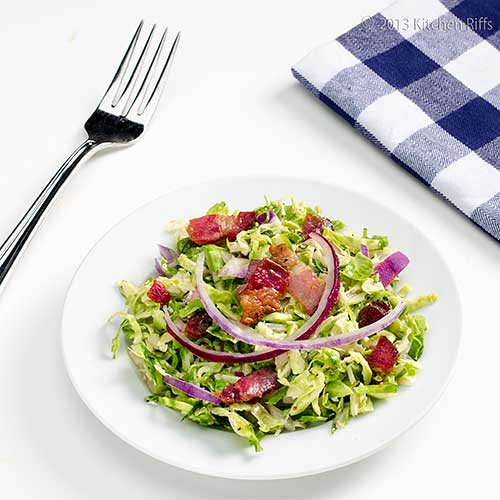 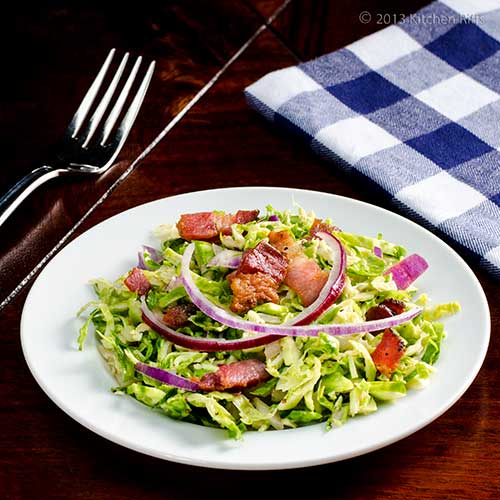 “That’s because so many cooks boil them to death,” I said. “Which destroys the flavor. And the odor of overcooked Brussels sprouts—or any kind of cabbage, really—is seriously off-putting.”

“Nothing off-putting about this salad, though,” said Mrs K R. “The bacon aroma is irresistible.”

“Yeah, I’m surprised someone hasn’t made bacon perfume,” I said.

“They have,” said Mrs K R, smiling broadly. “Didn’t you know? I was wearing it the day I first met you.”

OK, she was joking. But eau de bacon still sounds like a killer product. And most guys wouldn’t stand a chance.