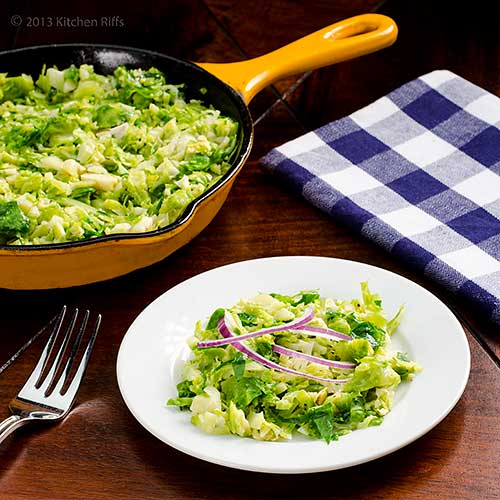 Throughout much of the US, markets are loaded with Brussels sprouts right now. That’s because these little buds reach their peak when the weather turns chilly. Once they’ve been kissed by frost, their flavor seems brighter and their texture even crisper.

What to do with all this bounty? Make a hash of it, we say.

Hashed Brussels sprouts are easy to make, and their flavor can entice even the most cabbage-avoidant. Plus, you can do most of the prep work ahead of time, then quickly finish them right before serving. Perfect for a big, multi-dish dinner (like Thanksgiving, just to mention one example).

Still worried that some guests will balk at eating this much-maligned vegetable? Just tell them you’re serving a great new French veggie called choux de Bruxelles. They’ll eat it up. 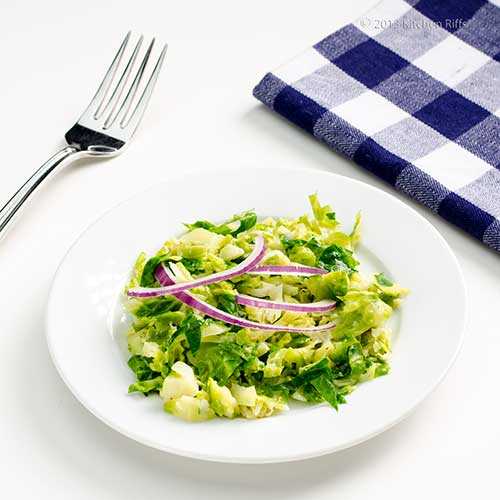 To make this dish, you just clean the Brussels sprouts and parboil them for a few minutes. Then drain and “hash” them (i.e., cut them up with a knife). You can do these steps hours—even a day—ahead of time. Then just before serving, warm the hashed sprouts briefly in melted butter to finish the dish. Simple.

Parboiling (that is, quick cooking followed by immediate cooling in ice water) locks in green veggies’ flavor, color, and nutrients. Those dull, grey Brussels sprouts you’ve seen? Overcooked. No chance of that happening with this recipe.

There are several methods for making hashed Brussels sprouts, but this is the easiest one I know. My recipe is lightly adapted from one I found in Julia Child’s The Way to Cook.

Prep and parboiling time for this recipe is 20 to 30 minutes (depending on whether you hash the Brussels sprouts by hand or use a food processor). When you’re ready to serve, you just need to heat the cooked Brussels sprouts in melted butter—another 3 or 4 minutes, tops.

This recipe makes 6 to 8 side-dish servings, and you can easily scale it up or down. Leftovers keep in the refrigerator for a few days if stored in an airtight container. 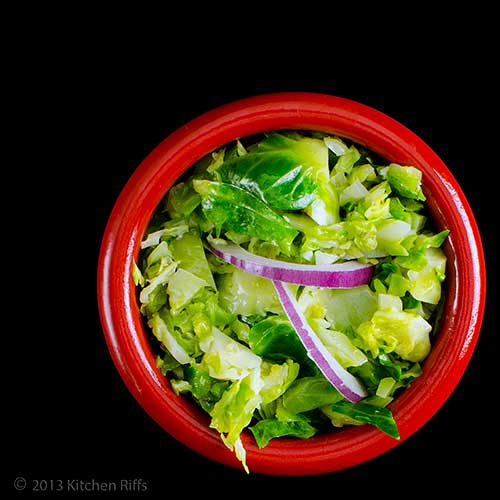 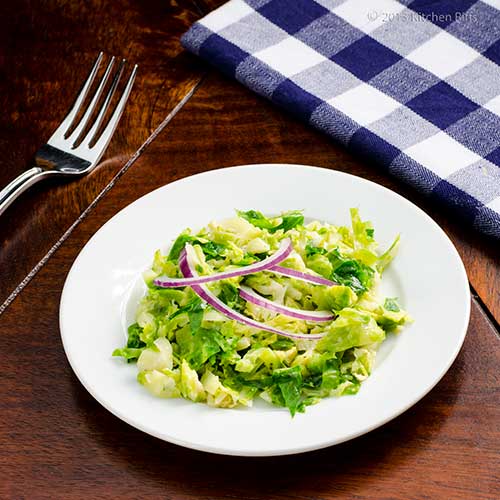 “Wow, I thought your Roast Brussels Sprouts were the best,” said Mrs K R. “But these might be better. Gorgeous color—and flavor.”

“And to think I used to hate Brussels sprouts when I was a kid,” I said.

“Me too,” said Mrs K R. “That’s because back in the day, everybody boiled them into submission for hours. Or so it seemed.”

“It’s amazing how that’s changed,” I said. “Now veggies are often the best part of the meal. And Brussels sprouts have become one of my faves.”

“So I guess it’s revenge of the Brussels sprout,” said Mrs K R. “Hey, that sounds like a promising story idea, don’t you think?”

“Yeah, we could turn it into an action flick!” I said.

“Too bad Daniel Craig is occupied with other projects,” said Mrs K R.