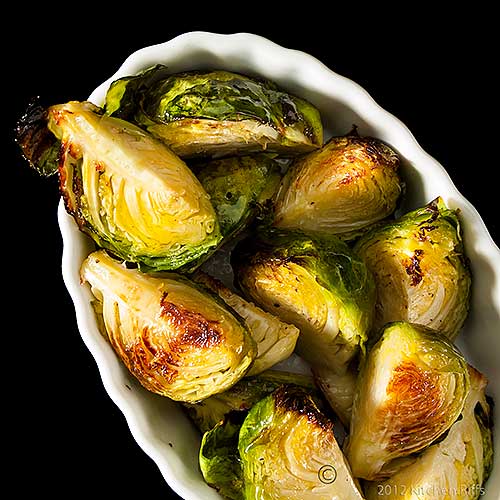 For People Who Think They Don’t Like Brussels Sprouts

You probably know how to eat Brussels sprouts, right?  Just politely push those little cabbage cubs around your plate.  Then pretend to forget them.

Well, good news:  You can stop playing with your food now.  Because Roast Brussels Sprouts are actually edible.  Delicious, even.

I know you may find that hard to believe.  But that’s probably because the only Brussels sprouts you’ve encountered have been overcooked.  As in, boiled to death.  And the truth is, if you cook Brussels sprouts too long, they turn into a stinky mess.  Nobody wants to eat a vegetable that’s been so badly mistreated.

Unlike lengthy boiling, roasting brings out the best in Brussels sprouts.  Roasting deepens and concentrates flavor, highlighting an inner sweetness that boiling obscures.  And roasting reveals hidden depths of flavor that most people find irresistible.

It’s a good thing Brussels sprouts are plentiful and inexpensive in the fall and winter, so you can indulge in your new favorite vegetable.  And with Thanksgiving later this week, they’re a great green veggie choice for your festive dinner.

Roasting is one of the easiest ways to cook this healthy and nutritious vegetable.  And they taste so great, even your most finicky eater will be asking for seconds.  Maybe thirds. 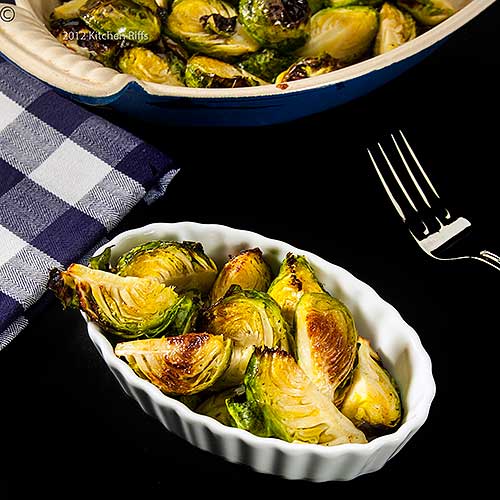 Roasting Brussels sprouts (or most other vegetables) is simple:  Just toss cut-up veggies with olive oil, salt, and pepper before popping them into the oven.  Include some herbs or garlic if you want to add a bit of flavor interest.

You can roast almost any vegetable at oven temperatures ranging from 300 to 500 degrees F.  I prefer 400 - 425 for Brussels sprouts.  They take longer to cook at lower temperatures, while at higher temperatures they have a tendency to char somewhat (which I sometimes regard as a good thing, although if you overdo it they may develop some of the flavor characteristics that people find unpleasant).  You can roast Brussels sprouts whole, but I find they cook faster and more evenly if I cut them in half lengthwise, or even into quarters.

I usually figure a pound of Brussels sprouts will yield 4 to 6 servings.  But people often want seconds on this dish, so adjust accordingly.  It’s easy enough to double or triple this recipe, if necessary.  I prefer to buy Brussels sprouts loose so I can select ones that are all the same size.

In the fall, you can also buy them on the stalk, which is rather nice.  Many supermarkets sell Brussels sprouts in little baskets.  Be aware that these often contain about 10 ounces of Brussels sprouts, enough for 4 smallish servings.

This recipe serves 4 and takes 5 to 10 minutes of preparation time, plus 20 to 25 minutes oven time.  You probably won’t have leftovers.  But if you do, they’ll store well in a covered container in the refrigerator for a few days. 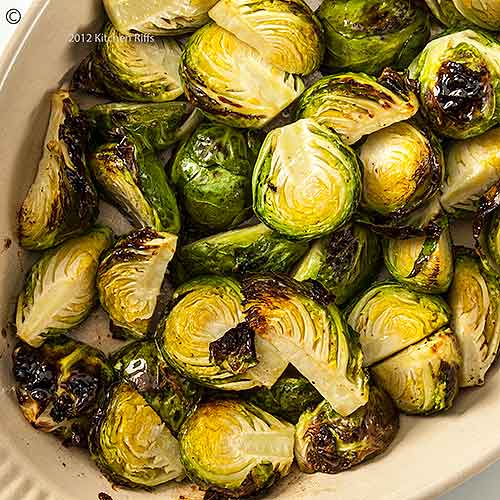 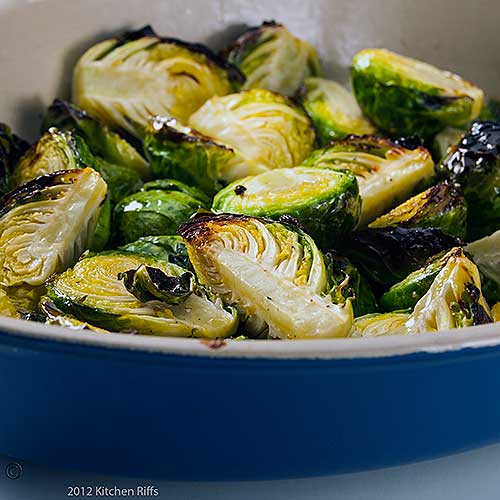 In the US, we celebrate Thanksgiving this Thursday.  And as soon as we clear our plates, many of us will start thinking about the winter festivals of Christmas and Hanukkah.

It’s a time of year when people entertain family and friends, so they’re looking for special treats to serve.  And here at Kitchen Riffs, we’re ready to help!  Over the next few weeks, we’ll be featuring recipes for two holiday favorites:  cookies and cocktails.

Why cookies?  Because even people who seldom bake (or eat) them are likely to do both as Christmas approaches.

And cocktails?  Because in the US, December is the biggest sales month of the year for liquor stores as we all stock up to celebrate the season.

So beginning next week, we’ll feature a cookie and a cocktail every week.  You may be familiar with some of the recipes, but I can almost guarantee that others will be new to you.

And you'll want to make them all.