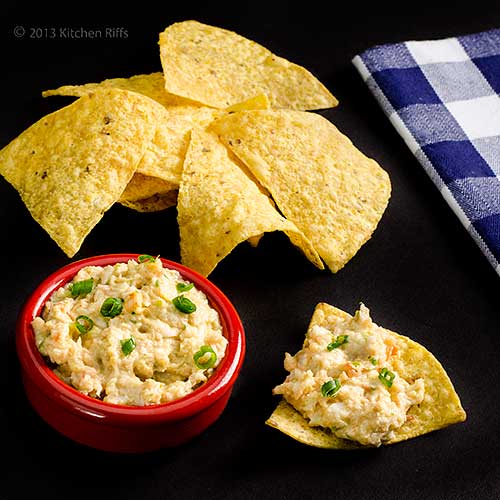 The Shrimp Toast you find on dim sum carts and Tiki-themed platters is totally delicious — but also insanely caloric.  The dish features a tasty shrimp mixture spread on very thin pieces of crustless dried white bread (usually cut into triangles).  These morsels are then deep fried until crisp and irresistible.

Luscious.  But not for the faint of heart.  If only we could capture the deliciousness of Shrimp Toast without all that deep-fried fat . . . .

Hey, wait.  We can!  Just drop the “toast” (who’s going to miss white bread anyway?) and turn the shrimpy mixture (aka “the good stuff”) into a tasty dip/spread that’s party-ready and hostess-friendly.

Set out a bowl of it as dip, accompanied by crackers, crudités, whatever.  Or stuff the shrimp spread onto cucumber boats, mushroom caps, or some other tasty base, and serve as canapés.

More good news:  You can prepare Shrimp Toast Dip several hours ahead, since there’s no last-minute deep frying required.  You’ll have more time to chat with guests, less mess to clean up.  And your bathroom scale will still respect you in the morning. 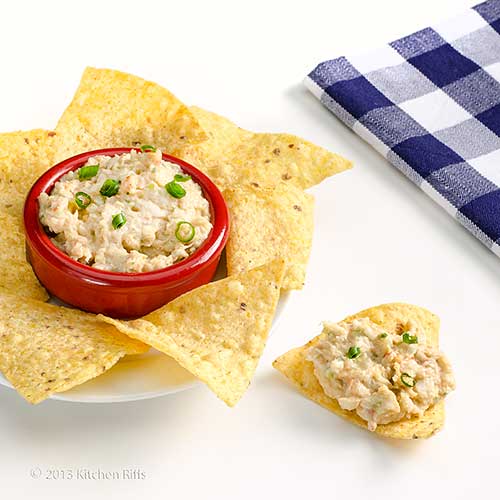 Shrimp Toast is a common item at Chinese-American restaurants.  It’s also a universal favorite on the pupu platters served at Tiki- and Polynesian-themed restaurants.  Since it’s Tiki month here on Kitchen Riffs (and all our food posts this month are platter-friendly), we just had to mention Shrimp Toast.

But we know that not everyone likes to deep fry.  And for those who do, we’ve already posted about Crab Rangoon. So we decided to take Shrimp Toast in a different (and healthier) direction.

We dropped the white bread — i.e., the “toast”— which contributes almost nothing to the flavor of the dish (it’s just meant to hold the shrimp paste together while it’s fried, and serves as a delivery vehicle for conveying the morsels to your mouth).  We also ditched the deep fryer, instead concentrating on the flavor of the shrimp mixture.

There are lots of recipes out there for Shrimp Toast — and about the only ingredient that’s common to all of them is shrimp (and, well, that white bread).  Many recipes feature other ingredients that I specify here.  And quite a few call for an ingredient I’ve decided to omit:  water chestnuts.  (But if the taste of water chestnuts is necessary to your enjoyment, by all means feel free to include some.)

One non-traditional ingredient I’ve included in my recipe is mayonnaise.  I use mayo primarily because it provides great texture, helping turn shrimp paste into a dip.  It also holds all the ingredients together.

I also include lime juice and zest as optional ingredients (because sometimes I like to use them and sometimes I don't).  For the batch I made to photograph, I omitted them.  But if you like lime, you’ll find that it adds some nice (if nontraditional) flavor.

Consider my ingredient quantities more as suggestions than rigid guidelines, BTW.  You may want to use more or less of particular flavors.

This recipe makes somewhere over a cup of dip, and can easily be halved, doubled, tripled — you get the idea.

Preparation time is about 15 minutes, and you can make it several hours ahead.  Leftovers keep for a day or two if refrigerated in an airtight container. 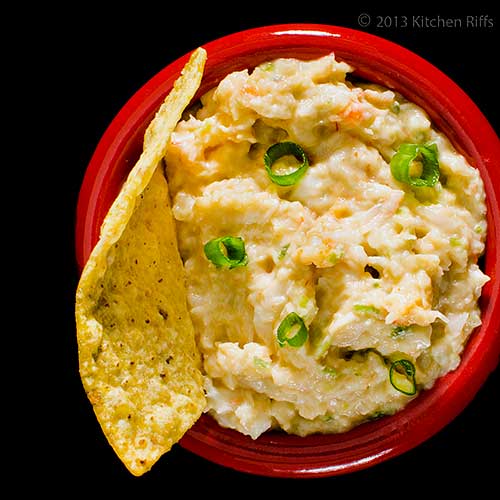 King of the Pupu Platter

“Dee-lish,” said Mrs. Kitchen Riffs as she munched a chip laden with Shrimp Toast Dip.  “Right up there with Crab Rangoon.”

“Yes,” I agreed, stuffing a dipped chip into my maw. “In fact, if Crab Rangoon is Queen of the Pupu Platter, Shrimp Toast must be King.  It’s been on every platter I’ve ever seen.”

“Though I guess serving it as a dip might not be traditional?” she asked.

“Well, Tiki is all about stretching the rules,” I said.  “The flavor of this Shrimp Toast Dip is sensational, which is all that matters to me.”

“No, but restaurants just put appetizers on a platter because they’re easy to serve that way,” I said between bites.

“Did I just hear you pooh-pooh the platter?” asked Mrs K R.