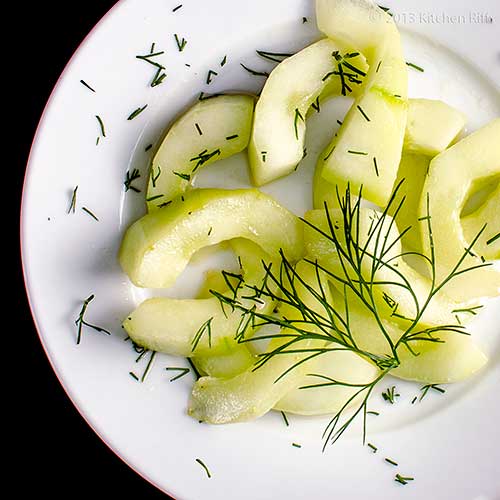 This easy, dill-enhanced side dish captures the taste of summer

Cucumbers are available year-round in the supermarket, but they come into their glory during the hot summer months.  That’s when we can get them fresh from our backyard gardens or farmers’ markets.  So here in the US, that means we’ll soon be seeing the best-tasting cukes of the year.

Most of us don’t give much thought to how we prepare cucumbers.  We tend to slice them and serve them raw, or toss them in a salad.  Sometimes we pickle them.  But cooking them?  Not so much.

Well, let me introduce sautéed cucumbers.  Cooking brings out flavor nuances that you might miss when eating cukes raw.  Combine with dill, and you have a dish that screams summer. It also pairs exceptionally well with some of our favorite summer treats — like grilled or poached fresh, wild salmon. And it’s a dish that takes only minutes to make! 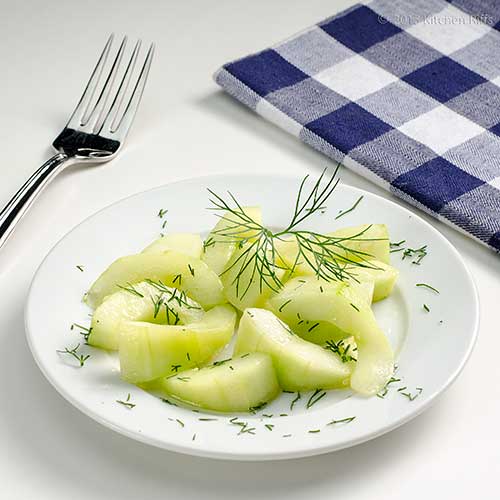 In the US, most supermarkets carry two types of cucumbers this time of year:  slicing ones meant for table use, and the kind meant for pickling.  The slicing varieties include the fat, thick-skinned ones (with numerous seeds) and the longer, thinner-skinned “English” cukes (they have relatively few seeds, and often are sold in shrink wrap to protect their skins).  The pickling type (Kirbies) are usually shorter.

Any of the slicing cukes meant for table use work in this recipe (avoid the pickling kind).  If in doubt, ask your friendly supermarket produce person — in my experience, they’re always happy to answer questions.

Although you can peel and slice the cucumbers ahead of time, I think this dish tastes best freshly made.  Fortunately, it’s easy to prepare (and almost cooks itself), so making it at the last minute isn’t a problem.

I found this recipe in Julia Child and More Company. I usually figure that one of the thick-skinned “fat” cucumbers will serve 2, while an English cucumber will serve 3 or 4 (depending on how big it is). So buy as many as you need, and adjust ingredients accordingly (as written, this recipe serves 2).

The recipe requires 5 minutes or so for prep time, plus 5 to 10 minutes of cooking. So figure on 15 minutes for the whole thing. 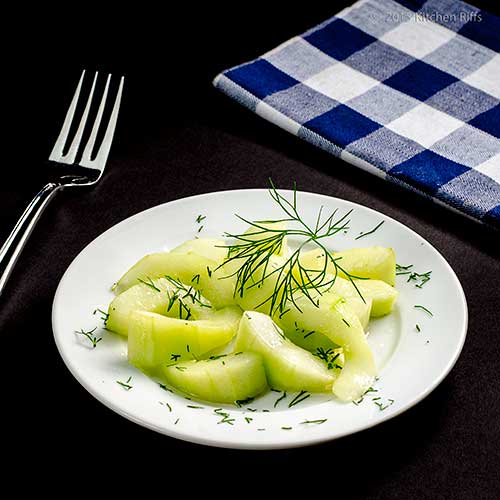 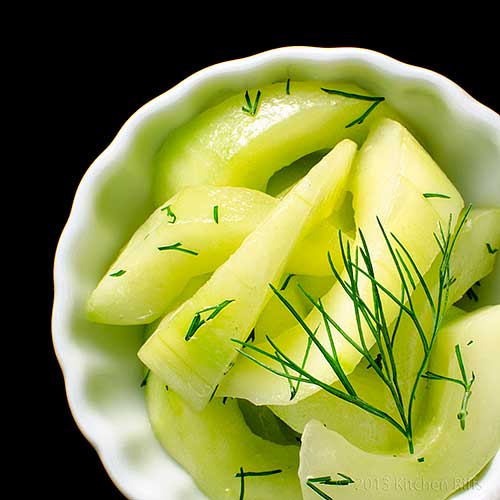 “Excellent cucumber dish!” said Mrs Kitchen Riffs.  “And it goes so well with fresh Poached Salmon. Love the dill flavor in both.”

“The two dishes really complement each other,” I agreed. “Dill on dill! Though another good side for the salmon might be that Hungarian Cucumber Salad we made last summer.”

“It’s perfect for this time of year,” I said. “In addition to salmon, it’s super with barbecue.”

“Speaking of which, have you started working on the menu for our big July 4th blowout?” she asked.

“Not yet,” I admitted. “Though we’ll have some kind of potato salad for sure. Since I’ve been smitten with dill for the last couple of weeks, maybe I should use some dill in the potato salad?”

“Sure,” said Mrs K R. “How about that horseradish potato salad with dill that you made a few weeks ago?”

“Funny you should mention that,” I said. “I’ll be posting about it next Sunday.”

“Good!” said Mrs K R, picking up her drink. “And of course before that, we’ll do another installment in the Summer Sippin’ Series. My favorite feature on the blog! What’s on tap?”

“What you’re sipping on right now,” I said.

Mrs K R drained her glass. “Terrific idea — I love these! They’re kind of a cross between a Mojito and a Classic Daiquiri.”

“Maybe even better,” I said.

“Should we tell people what it is?” she asked.

“I think I’ll wait till Wednesday,” I said.

“Don’t know if I can stand all this suspense,” said Mrs K R. “I’ll probably need a second drink — just to calm my nerves, you know.”

I mixed us another round. For medicinal purposes only, of course.