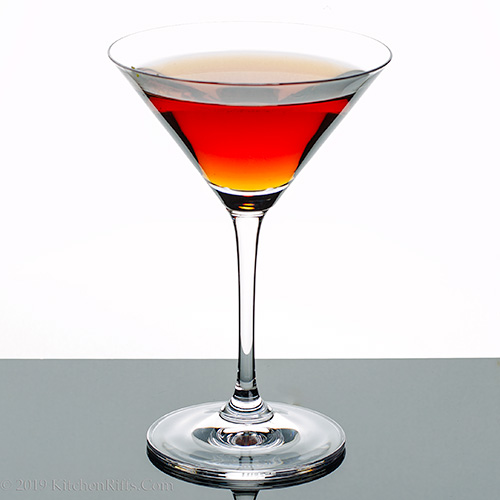 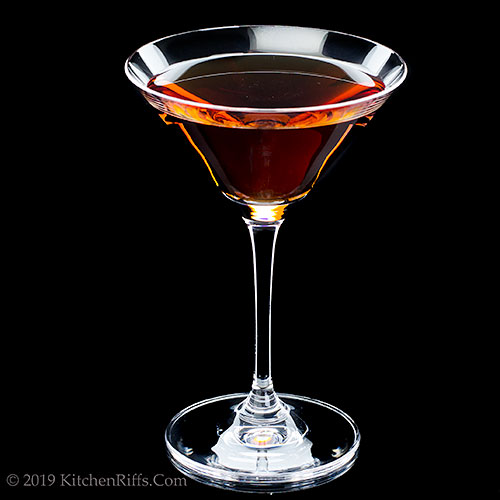 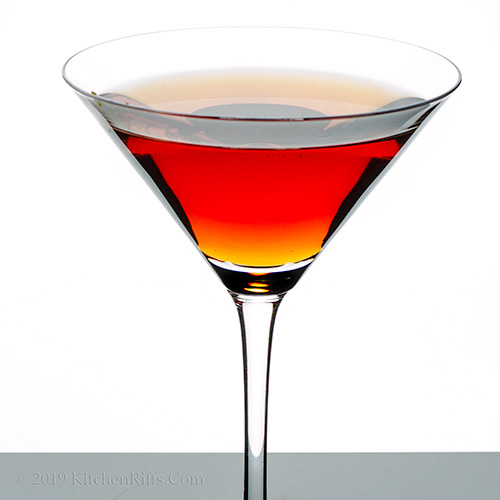 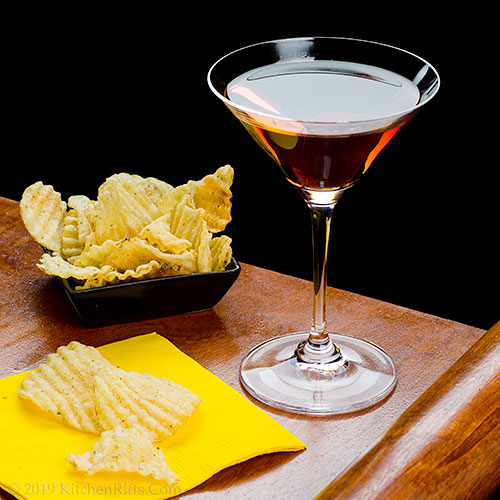 I always love your cocktail creations and I don't even drink!

Hi Angie, for years and years we rarely drank cocktails -- much more wine people. We still love wine, but cocktails are fun -- love all their flavors, colors, and history. :-) Thanks for the comment.

I am not a gin girl but I'd try this beauty!

Hi Pam, since you're not a gin fan, I'd suggest trying this with Dutch gin -- its malty flavor is really interesting! Thanks for the comment.

The color alone makes me want to try this drink. How lovely! I never developed a taste for gin, but I'm willing to try!

You really pack a lot of history into those cocktail recipes! I thought ALL gin had juniper flavoring -- now I know.

I love going to the horse races! This is such a great name for a drink, I will have to wait for the weekend to try this!

Hi Mae, most gins have juniper, but a lot of the modern dry gins in particular don't (or if they do, a tiny amount). That said, I really like juniper! So I really like Holland gin and the stronger London-style gins. :-) Thanks for the comment.

Hi Dahn, I'd declare an early weekend if I were you. :-) Thanks for the comment.

I always love your history lessons. And I had no idea some gins aren't flavored with juniper! So interesting!

Hi Kelsie, cocktail history is fun. :-) Thanks for the comment.

This cocktail is such a pretty color and looks so classy! Perfect for Derby viewing!

It's been a long time since I tasted gin, John, but I'd like to try this pretty drink. Loved reading about the history about gin, very cool to know! The Kentucky Derby is on our wedding anniversary this year, May 4 :) Lots of reasons to celebrate on that date, it seems! :)

This cocktail would go well here in Australia! Ozzies love their horse races and even declare the race day an official holiday, where most people don't have to go to work!

Hi Laura, classy taste, too. :-) Thanks for the comment.

Hi Marcelle, gin does have a fun history! Happy Anniversary, and thanks for the comment.

Hi Fran, I'll drink to more holidays! :-) Thanks for the comment.

Thanks for teaching me decades after 'it' happened! My darling husband and I loved G&Ts - said so when asked by a most difficult aunt living in N Germany when we were able to visit - methinks she thought us abysmally rude when we sat back and did not know to praise after she spent a 'fortune' trying to 'please' us . . . buying Genever for sure . . . :) !

Hi Eha, Genever in a G&T would definitely be different! I'm not tempted, although Genever instead of dry gin in a Tom Collins is actually pretty good. Thanks for the comment.

What a lovely cocktail! A beautiful color.

Hi MJ, this is definitely pretty. Tastes good, too. :-) Thanks for the comment.

Oh I love gin, such a classic cocktail...super elegant! Thanks for the recipe John...
I hope you are having a great week!

hi KR
i didn't know that about stirring cocktails - makes sense. Gins are so very trendy these days aren't they? love your photos as always. cheers
sherry

good to k ow about the history of the cocktail

So pretty and elegant ☺

John this is a gorgeous drink! Clear and cold and perfect for a day at the races... Just need to find my big hat and we are all set. Love the black backdrop ... that shot really pops!

Hi Juliana, this is an old cocktail, and a really good one. :-) Thanks for the comment.

Hi Sherry, some people can say there's a difference mouthfeel when you stir vs. shake -- stirred cocktails are a bit more "velvety" because they don't contain bubbles. Us? We're happy drinking them made either shaken or stirred! Thanks for the comment.

Hi M&E, cocktail history is interesting stuff, isn't it? Thanks for the comment.

Hi Natalia, really pretty. And really good. :-) Thanks for the comment.

Hi Bobbie, it's hard to show cocktail color against black, but I agree cocktails against black always look nice. :-) Thanks for the comment.

Looks like another new-to-me old drink I must try. Love your photo--AND your puns!

Hi Jean, we love making puns even though most of them are bad. Really bad. Really, really bad. :-) Thanks for the comment.

Another beautiful cocktail. Such a gorgeous color, and I love the related bits of history.

Oh man, this really is some horseplay (ha ha ha! I took your puns!)

Also, never heard of Angostura before!

Hi Valentina, it's the history of cocktails that got us into them. We love the flavor, of course, but the history is fascinating! Thanks for the comment.

Hi GiGi, puns are SO much fun (even when they're bad), aren't they? But you know all about that -- you make 'em all the time! Thanks for the comment.

This could start some real turf wars at our cocktail table! All ingredients in the “hooch” cabinet so we will stir up a batch for the Derby. (No real turf will he harmed in the making of these gorgeous drinks!)

I've never been to the races, but could easily be convinced I should go with a fabulous drink like this waiting for me!

Hi Deb, we haven't been to the races, either. And with this drink, we probably wouldn't care which horse won. :-) Thanks for the comment.

Ah...a nice change from a Mint Julep; even if it's obvious I do love them a lot! So very sophisticated; you would have to be an owner to imbibe this lovely drink.

I've been by Churchill Downs and the areas is so beautiful but I prefer watching on TV. I don't have enough money to get past the infield and I hear that's not so much fun. So I'll make your cocktail and keep pretending. :)

By the way I simply could not figure out how to comment for WEEKS but today was determined. Ah...the comment piece was opening as a 2nd window of my browser and I did not see that...now I know!

Hi Barb, hard to beat a Mint Julep! And thanks for the heads up about the comments -- I've received a couple of emails and messages over the last couple of months. Blogger can have problems processing comments, it seems. I switched to this comment format hoping it would be easier for people (previously I had the comments embedded on the same page, and one could reply to specific comments -- now one can't do that). It does seem to have helped some people, but made it more difficult for others. Just can't win! I may go back to the older format -- it's the one I prefer. Anyway, thanks for making the effort to comment!

Too many of your Turf Cocktails and I do bet I'd fall off my horse.
It's Derby Day and I've got my money on "Improbable". However, due to the time difference, we'll be snoozing when the 145th Run for the Roses occurs. But, learning the results gives us something to look forward to tomorrow. I hope your horse wins this afternoon, but if it doesn't you have a winner in your Turf Cocktail.

Thanks for that explanation about stirring or shaking. I had no idea. We love to watch the Derby. This cocktail sounds like a great way to celebrate.

What a gorgeous Derby cocktail! I have no Derby desserts on my blog, so I may need to sip on one of these and brainstorm for next year!! Thanks for the inspiration!!

Hi Ron, truth be told, we're not all that interested in the Kentucky Derby. We're interested in the drinks! There are a LOT of drinks associated with horse racing. Makes sense, since from Colonial times, good horse flesh and fine spirits have been preoccupations of certain "sporting" types in the US. :-) Thanks for the comment.

Hi Lea Ann, this is excellent for watching any sporting event! :-) Thanks for the comment.

Hi Liz, your mini Margarita cheesecakes look wonderful -- a great way to "eat" a drink. Bet you could use a lot of different cocktail flavors in cheesecake, cupcakes, etc. :-) Thanks for the comment.

After that controversial and nail-biting finish to the Derby, I'm sure many people will be needing a drink like this! ;)

Hi Carolyn, that was some Derby, wasn't it? Didn't watch it, but really interesting to read about. Thanks for the comment.

Seems like a "turf" cockail ought to be green! It sounds delicious, though. We don't drink enough gin.

Hi Jeff, :-) Love the idea of a green "turf" cocktail! Thanks for the comment.

I really wanted to do juleps this year (with a special recipe from Edward Lee) but by the time we came in from yard work to watch the race, I was too pooped! I needed a pick-me-up like this cocktail! Maybe that would have down the trick! Thanks!

Hi Debra, juleps are good, but do require a bit of work. This is easier. :-) Thanks for the comment.

I have the advantage of seeing this post after the "run for the roses". In hindsight, it easy to see how everyone involved with the Derby this year needs a drink! GREG