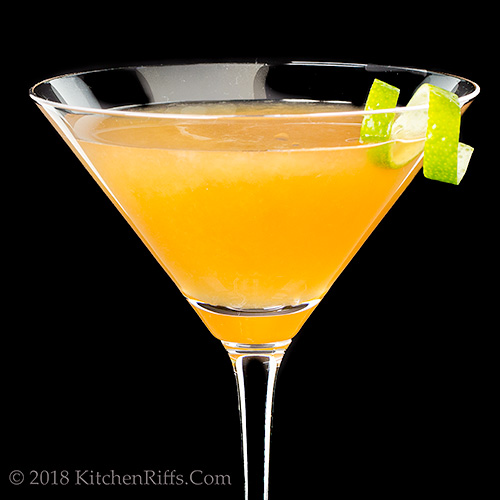 Celebrate the Kentucky Derby with a classic

Thoroughbreds are chomping to run for the roses. And you’ll need bourbon to watch them.

Enter The Derby Cocktail, a bourbon-based charmer that will quench your thirst while you lounge in the bluegrass. 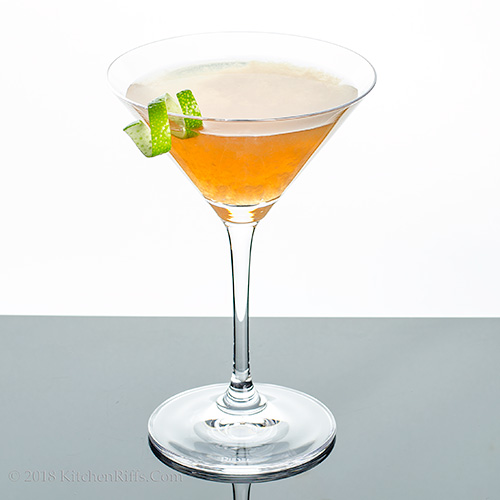 There are several variants of the Derby Cocktail. In Britain, the favored version uses gin as the base spirit. But here in the US, bourbon rules (and that’s the version we’re making).

We learned about this drink from Ted Haigh’s Vintage Spirits and Forgotten Cocktails, and we use his recipe. Haigh based his version on a recipe he found in a Trader Vic cocktail book.

This recipe takes about 5 minutes to prepare and makes one drink. 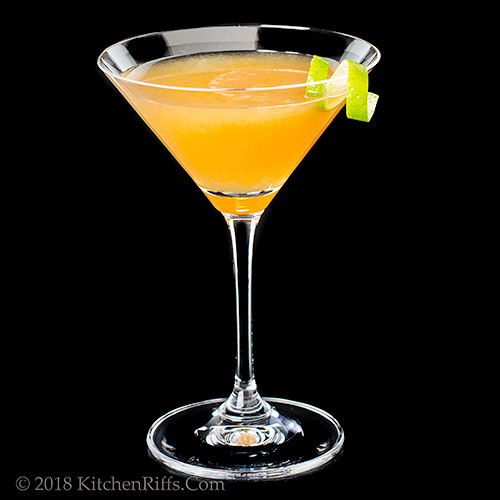 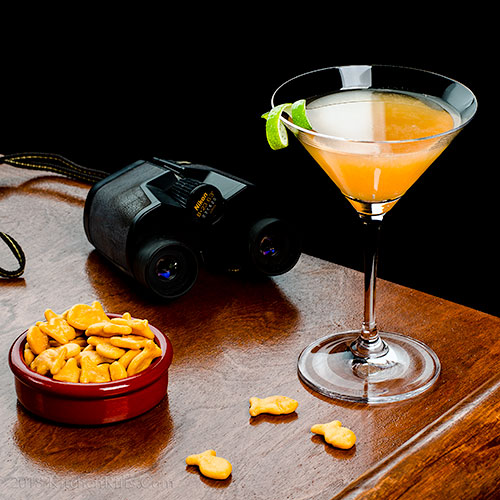 “Nice,” said Mrs Kitchen Riffs. “This is the Secretariat of bourbon cocktails.”

“Yup,” I said. “Makes me want to take the bit between my teeth!”

“Maybe you should canter over to the bar and make us another,” said Mrs K R.

“Careful, old timer,” said Mrs K R. “Don’t want you to go lame on the way to the bourbon.”

You may also enjoy reading about:
Mint Julep
Pendennis Cocktail
Seelbach Cocktail
Margarita Cocktail
Rosita Cocktail
Pimm's Cup Cocktail
Or check out the index for more
Posted by Kitchen Riffs at 8:30 AM

This cocktail sounds right up my alley--I love any drink with citrus in it! I think I'll need one of these with my margarita on Saturday!

Hi Kelsie, yup, have a Margarita to celebrate Cinco de Mayo, and one of these to celebrate the Kentucky Derby. Sure way to win the daily double. :-) Thanks for the comment.

You really should publish your cocktail recipe book and if you do, please do add all those conversations between your Mrs. KR :-) Love you two!

A beautiful cocktail that sounds delicious! And as a bonus, I found your link to the Pimm's Cup Cocktail, a drink I've been enjoying at various bars lately. It's a little after ten in the morning now. Too early to drink?

Hi Angie, we love writing those conversations! :-) Thanks for the comment.

Hi Terry, a Pimm's Cup looks kinda sorta like iced tea, so I think you can have it as your lunchtime beverage. :-) Thanks for the comment.

Your posts always make me chuckle, and this one makes me VERY thirsty!

Hi Pam, looks good, tastes better. :-) Thanks for the comment.

I see you are a goldfish fan! You need to find the Micky-Mouse ones.

That looks like a very cool cocktail. I love orange liqueurs, and every time I read your cocktail recipes I put another liqueur on my tentative list. Time to go to the liquor store -- soon.

Hi Mae, goldfish are awesome! A real weakness. :-) I do need to find the Mickey Mouse ones -- such a fun idea. Thanks for the comment.

Beautiful cocktail. And we always make a special beverage for the Derby. Thanks for a new recipe. Pinning.

Hi Lea Ann, special beverage for a special day. :-) Thanks for the comment.

You must have made this for ME! I love everything about it and cannot wait to give it a lap around the track :) Thanks so much for this beautiful recipe!

This is the drink everyone at the track will drink before placing bets... And then lose all their money! LOL!

Hi GiGi, yup, that's the downside to having one of these! :-) Thanks for the comment.

With Kentucky on our southern border, I have lots of friends who go to the Derby. I'd pick one of these Derby cocktails over a mint julep for sure!! So beautiful!

Hi Liz, we like a good Mint Julep, too, but the flavor of this drink is really more interesting. Thanks for the comment.

Well...I'm hot to trot with the thought of this drink. After all this only happens once a year!

Hi Abbe, isn't this a fun drink? Makes one want to giddy up! :-) Thanks for the comment.

This reminds me of a teacher I used to work with. She would talk about the Derby every year and always wore a fancy hat on Derby day. It always made me want to go to the Kentucky Derby but I still have never been there. What a fun post!

Hi Dahn, we haven't been to the Kentucky Derby, either. Really should! And have one of these, of course. :-) Thanks for the comment.

Anything with Grand Marnier has to be good. A local bar used to specialize in a Grand Marnier margarita. They were so good, but quite dangerous. I think this Derby cocktail might be a little dangerous as well. :) Looks quite refreshing.

Recently we had another progressive dinner and neighbour John selected the Kentucky Derby as the theme! What fun, I had dessert and I did three mint julep desserts (small tasters) on a plate. I wish I had seen this cocktail, it would have made a lovely addition.

I didn't know that Grand Marnier is a curacao, nor that Cointreau is a triple sec. I love finding that kind of stuff out, so thanks.

Sounds super refreshing! Way to get in that vitamin C and have a little fun too. One of these days would love to see your bar supplies. Basic must have's. Do you have one already in the archives? Wishing you a super week John!

Hi MJ, I usually use Cointreau in my margaritas -- will have to try it with Gran Marnier! And yes, the Derby does have some booze in it, so we don't drink more than two. :-) Thanks for the comment.

Hi Eva, the Mint Julep is a wonderful drink, so I can see how three deserts themed around that would be superb. :-) Thanks for the comment.

Hi Jeff, you can get pretty geeky about booze-related stuff -- it's fun! But then we're pretty geeky (and know you are, too). :-) Thanks for the comment.

Hi Bobbi, way back when we did a post about cocktail basics (http://www.kitchenriffs.com/2012/05/cocktail-basics.html) but don't really go that much into which booze to buy (although we did spend time on the triple sec vs. orange curaçao issue). We should probably do another one on which types of booze you really need to buy -- been thinking about that for a couple of years, actually. Thanks for the comment.

We should be wearing a fancy hat when we indulge in this good looking drink. I love your notes! Prost!

GOLD FISH COOKIES, OK I got distracted. Love bourbon so this drink is a winner, I'll bet on it (more than 2$ lol).

Hi Evelyne, those goldfish are pretty good, aren't they? But the Derby gives them a run for their money! :-) Thanks for the comment.

what a splendid looking drink. so pretty, and refreshing i bet. love the photo with the black background cheers Sherry

Hi Sherry, it's a wonderful drink -- we'll be having this again tomorrow. :-) Thanks for the comment.

Hi Frank, it's a great color! And fantastic flavor. :-) Thanks for the comment.

I am going to my first ever derby party tomorrow and I definitely hope they serve these. Sounds right up my alley.

Hi Laura, these are good! You'll like. Bet the Derby party will have Mint Juleps, though -- also a really nice drink. :-) Thanks for the comment.

Your liquor cabinet must be bursting at the seams. I love how you've curled the lime. Betting on the horses does seem to go hand in hand with special drinks xx

Hi Charlie, we have an embarrassing number of bottles of booze around.Anyway, this is a wonderful drink -- having it again tomorrow! Thanks for the comment.

I like the look of this cocktail. I hope that our TV shows the Kentucky Derby and I can indulge.
Amalia
xo

Hi Amalia, with or without the race on TV, it's still worht indulging with one of these! :-) Thanks for the comment.

Since I grew up in Louisville, I've been to the Derby many times, mainly in the infield, and the stories I could tell! It was a week long celebration with burgoo cookouts, hot air balloon races, riverboat races and on and on. Since living here in the Chicago area, it's like no big deal and hardly recognized. I miss those days back when very much. Growing up, we had a houseful of guests and after I married too. So much fun and a big huge deal! Rambled on here, your drink is perfect for the day! Love the combo of bourbon and vermouth and will have to try this. Sounds better than a Mint Julep to me! Have a wonderful weekend, John and thanks for the recipe!

Perfect for KD and also 5th of May. Cheers!

Hi Pam, I think this drink IS better than a Mint Julep! Fun stories about growing up in Louisville. :-) Thanks for your comment.

Hi Denise, yup, this drink winds the daily double. :-) Thanks for the comment.

I love the pairing of the goldfish crackers! Too fun. And just what we all want with a potent cocktail.

Hi Carolyn, that's a nice pairing, isn't it? And the color of the goldfish works perfectly with the drink. :-) Thanks for the comment.

This looks like another delicious and refreshing cocktail with the citrus!

Hi Amy, don't you just love citrus in cocktails? Such a nice flavor! Thanks for the comment.

Sounds like a great cocktail. I missed this one for the derby, but will have to try anyway.

Hi Dawn, this is a really good drink -- we love its flavor. Good for the Derby, of course, but any other time, too. :-) Thanks for the comment.

This cocktail sounds like it's right up my alley- I enjoy an alcoholic drink every 4 days (my self-imposed limit). I've been under strain recently trying to finish up my university essays (yes, I'm a perpetual student). I feel like 'hitting the bottle' now, but will wait until tomorrow to try your cocktail!

Anything with lime in is always good with me! This sounds delicious.

Hi Caroline, lime is a wonderful cocktail ingredient! And although we usually mix it with rum, it works extremely well with bourbon. Thanks for the comment.

I have tried the gin version but I am pumped to try the burbon version. Yum.

Hi Emma, the gin version reminds me a little of Pink Gin, which I like a lot. You definitely need to try the bourbon version -- wonderful flavor. Thanks for the comment.

I really appreciate your expertise in selecting ingredients. As I only had Cointreau I had to go with that, so I added an orange peel and it helped tone down the citrusy lime component. I need to add Grand Marnier to the cabinet!

Hi Susan, adding an orange peel is a great idea! And Grand Mariner is SO good -- well worth adding to your liquor cabinet. :-) Thanks for the comment.