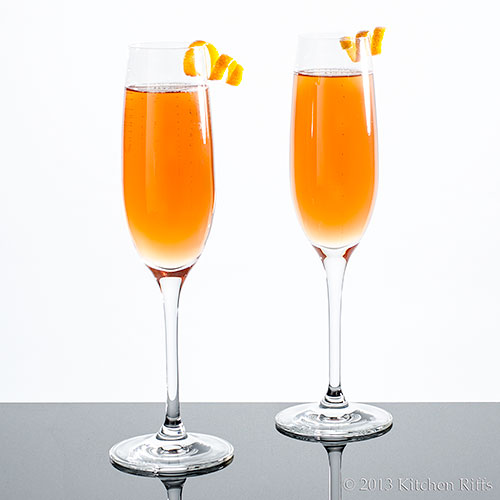 This bourbon-based champagne cocktail brightens up the holidays

Like bourbon? And champagne? Then we’ve got just the drink for you.

The Seelbach was invented around 1917 as the signature cocktail of the Seelbach Hotel in Louisville, Kentucky. Rumor has it that F. Scott Fitzgerald hung out at the hotel bar while writing The Great Gatsby (remember, Daisy Buchanan hailed from Louisville). And that Gatsby character? He may have been inspired by a gangster Fitzgerald met there—presumably while enjoying this flavorful elixir.

True story? Who knows? What we do know is that sometime during Prohibition (when the hotel was forced to close its bar), the recipe for this drink was lost. Then a hotel manager rediscovered it in 1995.

Lucky for us. Because on Kitchen Riffs this year, we’ll be doing nothing but cookies and cocktails from now until Christmas. As a bonus, all the cocktails will be made with champagne (or sparkling wine, to be more precise).

So stock up on bubbly and grab your party hat. As Gatsby might say, “Time to enjoy some holiday cheer, old sport.” 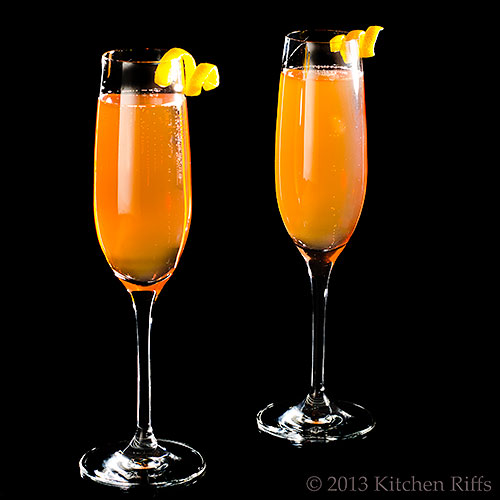 Cocktails are better when made with quality ingredients, but you needn’t go overboard on the bubbly. Any decent sparkling wine (preferably a brut or dry Spanish cava) will work fine. More about bubbly choices in the Notes. 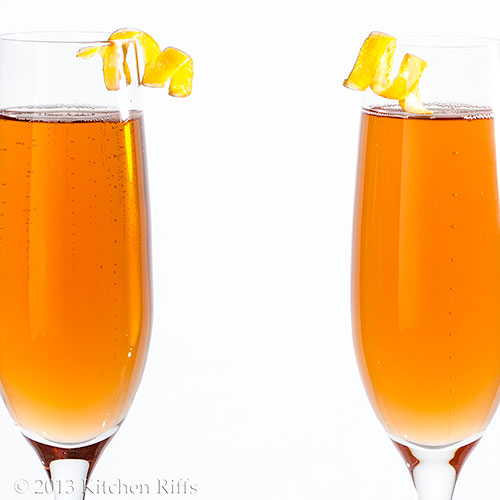 “Is it true that Fitzgerald drank these at the Seelbach Hotel?” asked Mrs Kitchen Riffs, sipping her cocktail.

“Well, he definitely spent some time in Louisville,” I said. “And knowing his fondness for all things alcoholic, I’d be surprised if he didn’t check out the Seelbach bar—and this drink.”

“Speaking of alcohol, I just finished re-reading The Sun Also Rises,” said Mrs K R. “I’d say Hemingway could knock them back too. In between bullfights and Lost Generation debauchery, that is.”

“Indeed,” I said. “You’ll be interested to know that he even invented a drink that uses champagne.”

“If we had room for it,” I said. “We’re running out of space between now and Christmas—too many other cocktails I want to do.”

“But we always do a cocktail the first Wednesday of every month,” said Mrs K R. “And the next ‘first Wednesday’ just happens to fall on January 1, 2014 .”

“So we can post about Hemingway’s champagne drink then,” I said. “Great way to extend the holiday festivities.”

You may also enjoy reading about:
Classic Champagne Cocktail
Bellini Cocktail
Mimosa Cocktail
Cocktail Basics
Or check out the index for more
Posted by Kitchen Riffs at 9:15 AM