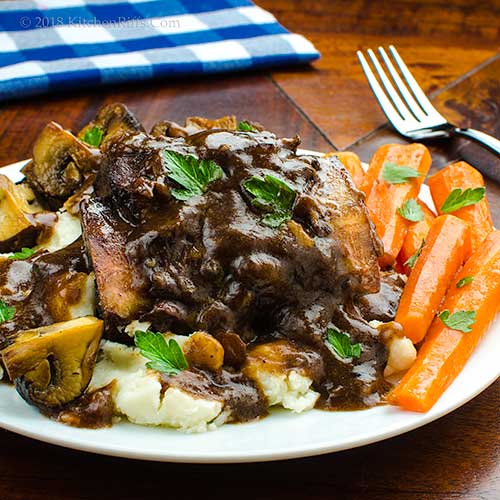 Served over mashed potatoes, comfort food at its finest

Spring may be coming, but it’s still plenty chilly in our part of the world. So we’re not putting away our braising pot just yet. And what better than braised beef short ribs to chase away the last days of winter?

After a few hours luxuriating in a rich wine sauce over low heat, the meat becomes soft, yet retains its toothsome character. And the rich flavor is succulent beyond belief.

Best of all, this dish tastes better cooked a day or two ahead, then reheated. So it makes perfect party food.

It’s so good your guests will applaud. Or even better, request seconds. 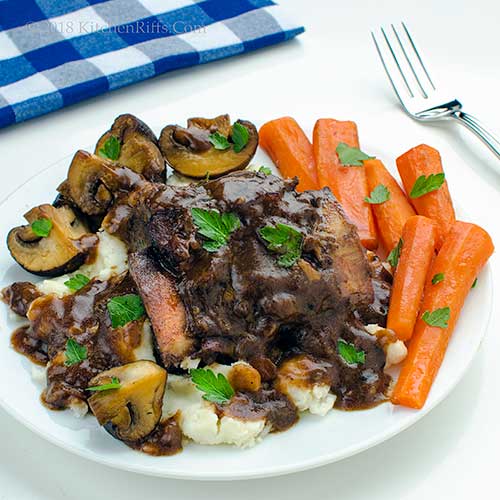 Braising is nothing more than slow cooking in liquid in a covered pot. In other words, pot roasting. The slow part is important, though, because the cut of meat we use in this dish tends to be rather tough (all those connective tissues); slow cooking takes care of that.

This recipe has two key stages. First you brown the meat. Then you cook it at the barest simmer in a rich wine stock, with onions and carrots to help flavor the dish.

We’ve made similar dishes before, including Boeuf Bourguignon and Wine-Braised Beef Pot Roast. BTW, almost every cuisine features some sort of braised dishes. In fact, one of our favorites is Chinese: Red-Braised Beef.

We usually make this dish over three days, and our procedure reflects that. But you can make it all in one day if you prefer – see Notes for instructions. In fact, you can even make this dish using the procedures we set out in our Boeuf Bourguignon and Wine-Braised Beef Pot Roast recipes. They’re very similar to this recipe, but a bit more streamlined. We think this recipe does yield superior flavor, though.

Prep time for this dish is about 45 minutes. Total cooking time adds about 3 hours, most of it unattended.

This recipe serves 4, probably with leftovers (see Notes). Leftovers keep for several days if refrigerated in an airtight container.

We like to serve this dish over mashed potatoes. But it’s equally good served over Polenta, risotto, Homemade Noodles, or whatever you fancy. You could even serve it with dumplings. Or Spätzle. 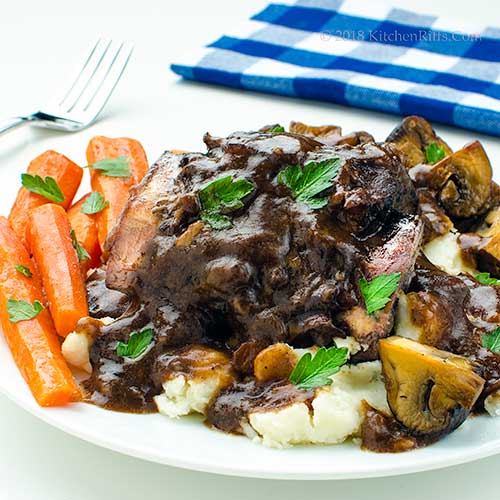 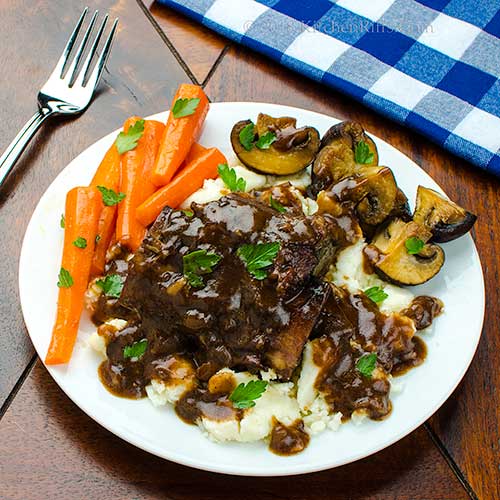 “The most complex recipe too,” I said. “Short ribs, but no short cuts.”

“You wouldn’t be ribbing me now, would you?” I said.