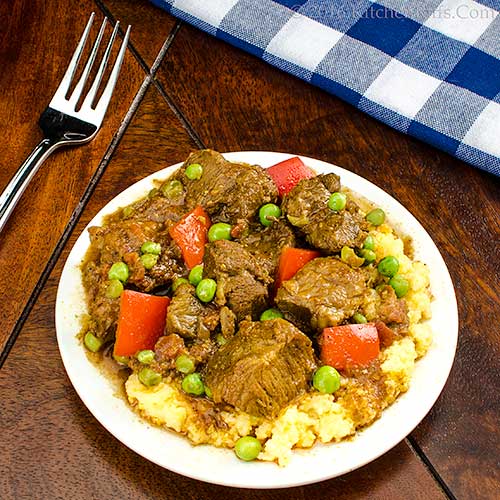 Vindaloo has an incendiary reputation. But no worries if you’re heat-adverse — it’s easy to tame this dish by lightening up on the chile.

Which means you can share this vindaloo with even the most finicky dinner guests (and the flavor is so good, you’ll want to). You can also tell them that pork is really, truly authentic in this dish (more on that below). The vindaloos they’ve had in restaurants are copycats. They’ll feel honored to be at your table. 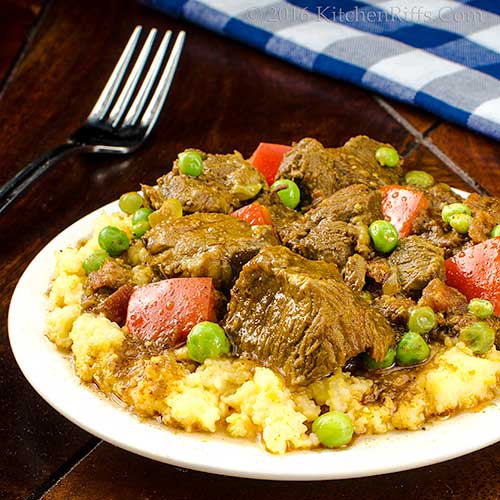 In restaurants, you rarely see this dish made with pork (most of India’s population is Hindu or Muslim, and pork just isn’t a dish they tend to consume). Restaurants often serve vindaloo made with lamb, beef, or chicken.

But vindaloo was created in Goa, an area in western India. It was settled by Portuguese Christians, who do eat pork. They developed vindaloo from a Portuguese dish that used a wine- and garlic-based marinade.

Because this dish is spicy, and contains mainly meat and chilies, it reminds us a bit of an Indian Chili con Carne (the kind made without beans). Chili con carne literally means “chilies with meat,” and that’s what vindaloo is all about. The spicing is different, of course, and vindaloo doesn’t have as much sauce as chili. But both have a fiery, downhome goodness that we find extremely satisfying.

This dish has a long ingredients list. That’s because it requires a lot of different spices to make the paste that flavors the meat. Don’t have some of the spices on hand? No problem — just skip them. The critical ones are coriander, cumin, turmeric, cinnamon, black pepper, cayenne, and paprika.

This dish traditionally is served over fluffy white rice. Or with an Indian bread like naan. If using rice, we like to serve Aromatic Yellow Rice — both the flavor and the color really complement the vindaloo.

This vindaloo is even better served over our easy Oven Polenta (we suggest skipping the cheese in the recipe) or Grits (again, skip the cheese). Neither of these options is traditional, but the spicy vindaloo combines wonderfully with the cornmeal in polenta or grits. (BTW, in the pictures we are using polenta.)

Prep time for this dish is about 30 minutes. Add an hour to let the meat marinate, then another 2 hours to brown the meat and let it simmer. This isn’t a quick recipe, but most of the cooking time is unattended.

This dish yields about 8 servings. Leftovers keep for a few days if refrigerated in an airtight container. 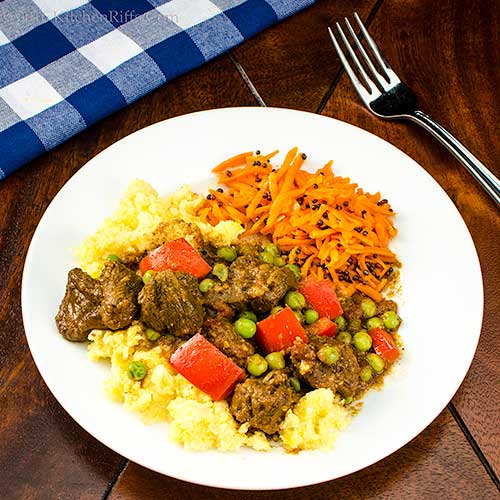 “Yup, I lost count of the number of spices I put in the paste,” I said. “But hey, spice is the variety of life.”

“So I guess we’re going to pepper each other with puns again?” I said.

Probably better stop now though. Don’t want to make a big dill of this.