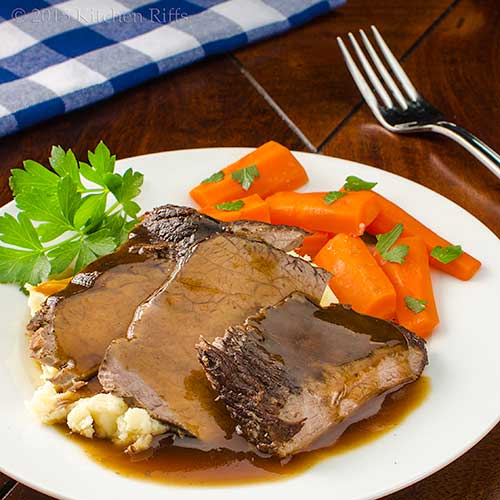 When we entertain, we often like to serve a big honking hunk of meat. Preferably something that’s full of flavor, easy to prepare—and can be made ahead of time.

Doesn’t sound fancy enough for company? Then just call it braised beef. And cook it with wine, the way the French do. All of a sudden we’re talking gourmet fare (and the perfect complement to a bottle of dry red wine).

Just make sure to prepare a big batch. Because your guests will be begging for seconds. 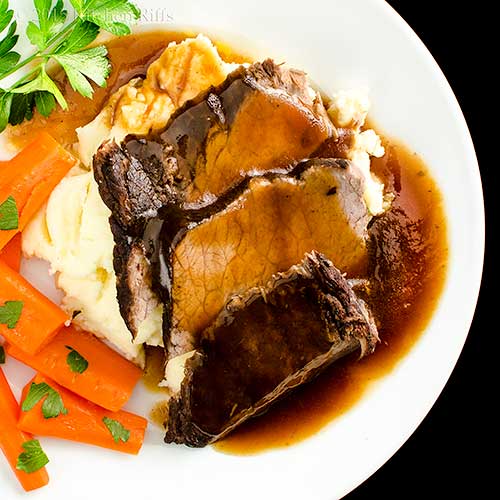 Beef makes perfect dinner-party fare. But unlike more highfalutin’ dishes (like standing rib roast), this one won’t break the bank. And when properly prepared, nothing offers more flavor and satisfaction than pot roast.

To make this dish, you first brown the meat, then cook it at the barest simmer in a mix of wine and beef stock. The result is very reminiscent of Boeuf Bourguignon (though for that dish, you cut the meat into small pieces and use more simmering liquid).

When making pot roast, we like to braise the beef in the oven (which provides an even cooking temperature). But you can cook it entirely on the stovetop if you prefer (we provide instructions for both methods). The important thing is to keep the braising liquid at the barest simmer.

BTW, when buying beef for pot roast, we often ask the butcher to tie the meat so it will hold together better while cooking. But this is very optional.

We like to serve sliced pot roast over a bed of mashed potatoes, accompanied by gravy made from the braising liquid. But if mashies aren’t your thing, feel free to substitute.

We learned about wine-braised pot roast from Julia Child. So our recipe is based on hers. She published several different recipes in her various books, but our favorite is the one we found in The Way to Cook.

Prep time for this recipe is at least 30 minutes, with braising time adding another 2½ to 3½ hours (largely unattended). So make this dish on a day when you have some time to spare (you can make it partly ahead of time if you prefer; see the Notes for suggestions).

How many people will this recipe serve? We figure that each pound of meat will satisfy 2 to 3, depending on appetites. So adjust accordingly.

Since our recipe calls for about 4 pounds of beef, you’ll probably have leftovers unless you’re serving a crowd. No worries. Leftover pot roast keeps for a few days if refrigerated in an airtight container. Or you can freeze it. 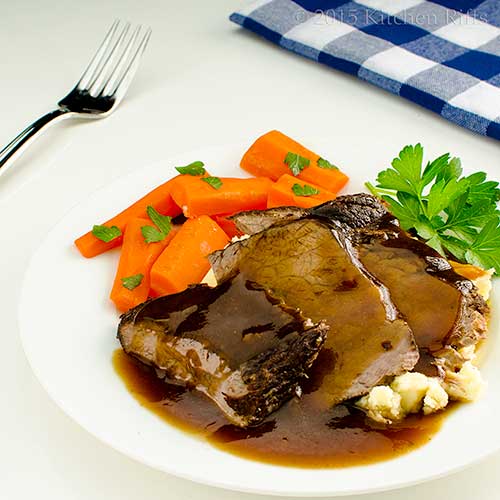 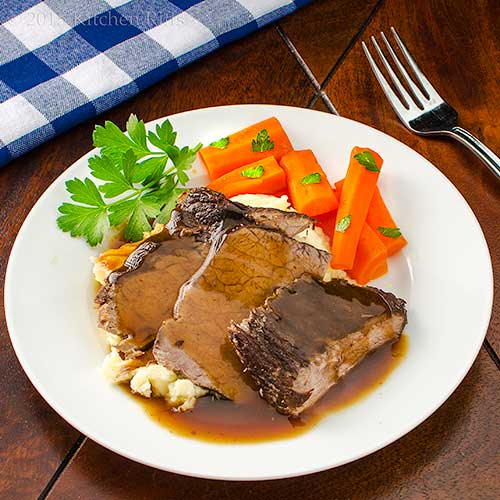 “Vive la France! The French know how to cook,” said Mrs. Kitchen Riffs, biting into her pot roast. “I’ve got no beef with this dish.”

“And pot roast goes so well with mashed spuds,” I said. “This meal is no small potatoes.”

“It’s a lot of food,” I said. “We’ll need to burn some calories after this. Can’t be couch potatoes.”

“Agreed,” said Mrs K R. “In fact, based on the size of your serving, you might need an extra workout, Mr Beefcake. Maybe a ten-mile walk.”

“But I’ll have to nap first,” I said. “Otherwise, I might drop like a sack of potatoes during our hike.”

Posted by Kitchen Riffs at 9:01 AM