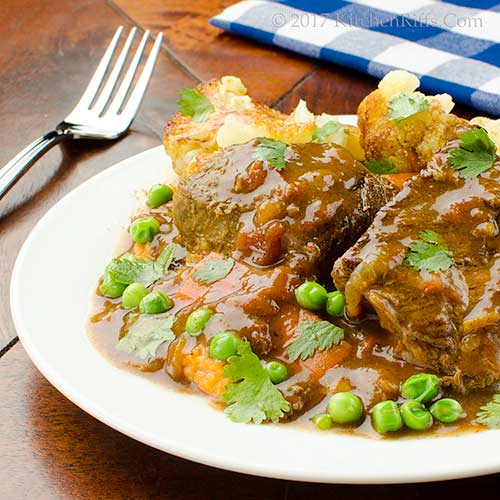 Carrots, peas, and cauliflower liven up this classic

It has cinnamon, cumin, paprika, cayenne – and they all come out to play. They give this dish savor unlike any other beef braise you’ve had. And we pump ours up even more with frisky veggies.

Prepare to wow your guests. 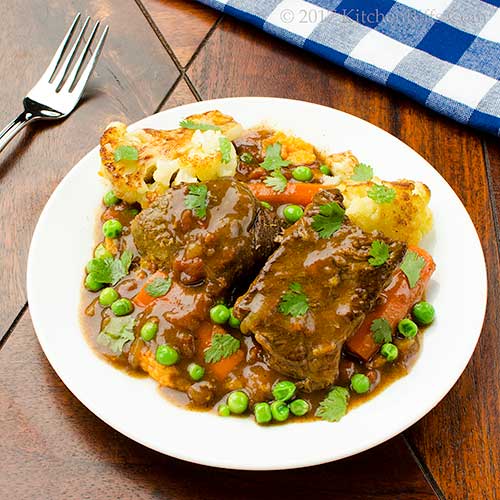 Many countries have some sort of stew or braise that is traditional to their cuisine. In Morocco, it’s tagine (AKA tajine), which is the name of both the stew-like dish and the conical-shaped vessel used to cook it.

But tagine is easy to make in your own kitchen, and you don’t need a special cooking dish. Just think of it as beef stew with a flavor twist, and cook it in a Dutch oven.

You can make this recipe with any vegetable, BTW, not just the ones we use. Or skip the veggies entirely if you want a meat-centric dish.

Traditionally, the sauce for a tagine is not thickened. Tagine is a communal dish, one where everyone eats from a common serving platter rather than individual plates. Diners use fingers rather than utensils. Typically, they start by dipping bread into the sauce and sopping it up, waiting for the meat and veggies to cool enough so they won’t burn their fingers. Once the sauce is gone, diners proceed to the main event.

But we’re serving individual portions on plates, so we’ve elected to thicken the sauce. And instead of relying on bread to sop it up, we like to serve it over mashed potatoes. Or especially over Chipotle Mashed Sweet Potatoes – the spices in the tagine work perfectly with the richness of sweet potatoes. This dish would also work well over Polenta.

This recipe is adapted from one we found in our favorite Moroccan cookbook, Paula Wolfert’s Couscous and Other Good Foods from Morocco. The original book has been out of print for a while, but a revised edition is available.

Prep time for this dish is about 30 minutes, and cooking time adds another 1½ to 2 hours (largely unattended). You can make this dish a day or two ahead of time, then finish it off the day you plan to serve it.

This dish serves 6 to 8. Leftovers keep well for a few days if refrigerated in an airtight container. 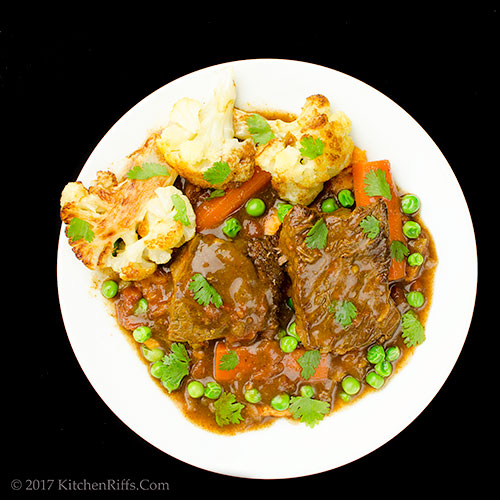 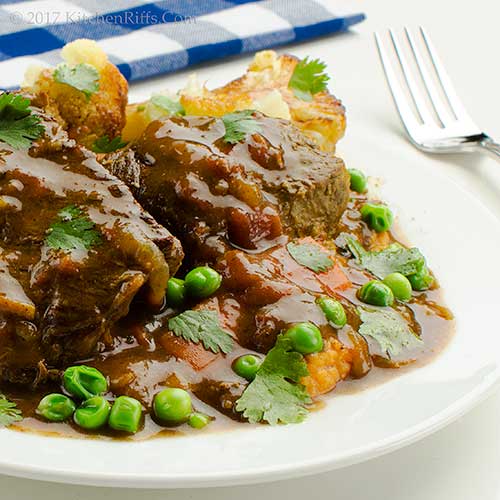 Stick a Fork in It

“This tagine is beautiful over chipotle mashed sweet potatoes,” said Mrs. Kitchen Riffs. “And we even get to use forks.”

“Which is good,” I said. “Because I don’t like to burn my fingers.”

“Less sauce down the chin, too,” said Mrs K R. “So no turmeric stains on your shirt.”

“And no greasy fingers dropping beef chunks in my lap,” I said.

Truth. Even though Moroccans might dismiss it as forked up.

You may also enjoy reading about:
Chipotle Mashed Sweet Potatoes
Polenta
Roast Cauliflower
Moroccan Kefta and Tomato Tagine
Boeuf Bourguignon
Couscous with Dried Fruit
Moroccan Carrot Soup
Or check out the index for more
Posted by Kitchen Riffs at 8:30 AM