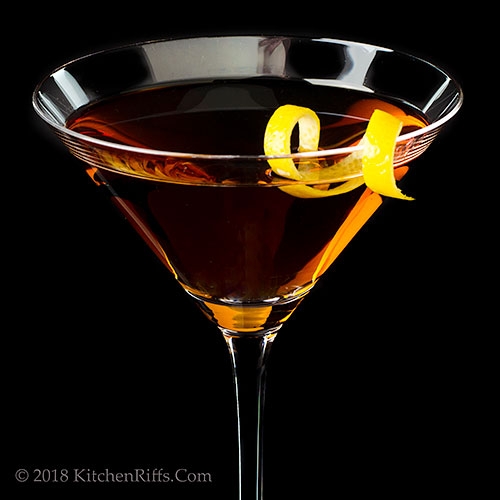 This Prohibition-era classic is an Irish whiskey Manhattan

OK, we’re not wild about the name of this drink. Back in the day, “paddy” was pretty much an ethnic slur against Irish immigrants. Fortunately, these days the insult has lost most of its sting.

That is the name of the cocktail, though, and has been since the drink was invented (probably in the 1920s). And since the drink tastes really good, we’ll just have to live with it.

Because once you taste this, you won’t want to live without it. 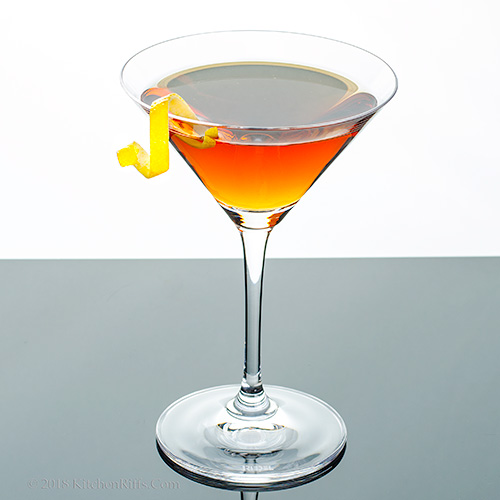 The Paddy Cocktail is basically an Irish whiskey variant of the Manhattan. As far as we know, a recipe for The Paddy was first recorded in Harry Craddock’s The Savoy Cocktail Book.

The original formula called for equal parts Irish whiskey and sweet vermouth. Too sweet, we say. So we opted for the formulation that Gary Regan devised in The Joy of Mixology: 2 parts whiskey to 1 part sweet vermouth. But tinker with the ratios to suit your taste. 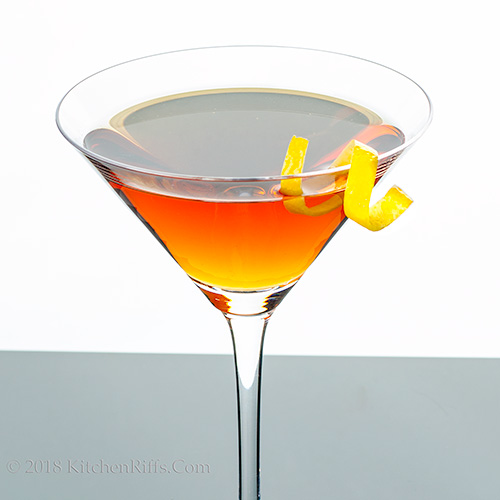 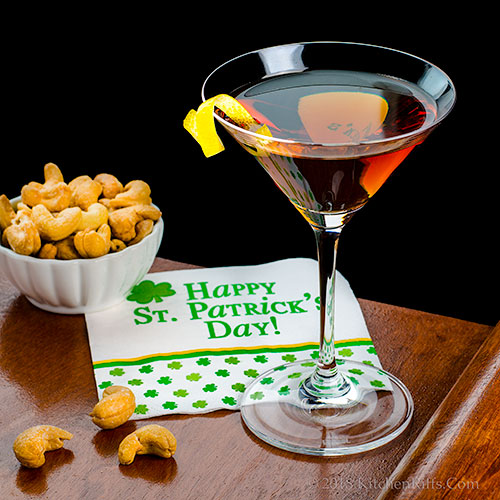 What’s in a Name?

“Great drink,” said Mrs. Kitchen Riffs. “That name, though! It brings up a bit of history that most of us wouldn’t mind forgetting.”

“People in the US were so hostile to Irish immigrants in the 19th and early 20th centuries,” I said. “Many also didn’t like Germans, Italians, Scandinavians, Poles. And the list goes on.”

“At least we can have some fun with the name,” I said. “Remember that song by Shirley Ellis? The Name Game?”

“Ah, back in the 1960s,” said Mrs K R. “We were mere tadpoles at the time. Let’s see, she’d change some of the letters and add some nonsense sounds. So Paddy would become:

You may also enjoy reading about:
Manhattan Cocktail
Blackthorn Cocktail
The Hearn's Cocktail
Brainstorm Cocktail
Irish Coffee
Income Tax Cocktail
Or check out the index for more
Posted by Kitchen Riffs at 8:30 AM

So many drinks! Combinatorics probably comes up with millions of possible combinations (like in a pizza commercial). Though I have almost none on hand in my house.

Hi Mae, loads of different combinations for drinks! But a lot of them are really just variations of a "mother" drink -- like this one. Fun to try them all, though. :-) Thanks for the comment.

What a gorgeous cocktail, of course anything served in a classy martini glass would rock in my books. Your glass has the perfect proportions, would you mind sharing the specific brand it is?

Hi Eva, it's a great drink. And that's my favorite cocktail glass for photos. It's also the perfect size for cocktails. It's a Riedel glass, and holds about 4 ounces, probably a bit more (forget exactly how much). Thanks for the comment.

Love the sound of this, really lovely colour.

Hi Caroline, really lovely flavor, too. :-) Thanks for the comment.

What a beauty. It sounds delicious too.

Such a gorgeous color - like a sunset in a glass!

I have never heard of that ethnic slur before (maybe I am too young - not that young lol) but the cocktail sounds amazing. I am not a fan of Irish Whiskey straight up, Scotch yes go figure, bt mixed like this I would enjoy a few and be tipsy, tipsy, bo-tipsy
Banana-fana fo-tipsy
Fee-fi-mo-mipsy
tipsy!”

Hi Pam, it is delish! Good drink. :-) Thanks for the comment.

Hi Shashi, it really is pretty! So many drinks are -- once of the nice things about them. Thanks for the comment.

I'm so getting in the spirit of St. Patrick's Day and this sounds like my kind of drink.

This cocktail is so clear and crisp. Stirred and not shaken.... Wishing you and Ms. Riff a safe and happy St. Patty's day!

So many cocktails, so little time! This one's a beauty, it looks wintery and warming all at the same time. Forwarding to our son, he would enjoy this one.

I am a huge fan of Irish whisky - probably my favorite drink of all. This is a must try for me and so pretty!

Hi Deb, so little time is the story of our lives, isn't it? Hope your son enjoys this! Thanks for the comment.

What a perfect cocktail for Saint Patricks Day!!

Hi Dahn, this has wonderful flavor! :-) Thanks for the comment.

My parents loved their Manhattans! Wish they were around and I'd serve them one of your cocktails!

I could use one or two of these cocktails right now. I had a little incident with my car, let’s say I no longer have a mirror. Prost!

A beautiful cocktail and actually looks quite fall-like. I'm surprised it's not green. I've never tried any of the ingredients in this drink but if you were to hand it to me I'd definitely indulge.

Hi Liz, the Manhattan is a wonderful drink. One of our favorites. :-) Thanks for the comment.

Hi Gerlinde, too bad about your "incident!" Hope everything is OK. A couple of these should restore your good humor. :-) Thanks for the comment.

Hi Vicki,this does make a good fall drink. Appropriate, since it's fall down under. :-) And you'd enjoy indulging in this! Thanks for the comment.

I used to love that rhyme. Still do. That's how my Zoe got her nickname Boey. Anyway love this drink too. Always good to get your Irish on!

Such a beautiful drink! Love the back lighting, John.

I'm pretty sure we have all the ingredients to make THE PADDY... So I can easily go get my husband drunk and then blame you? LOL!

Your cocktails are always too strong for me, but i can’t help but stare at your photos!!! Beautiful.

Hi Abbe, yup, getting one's Irish on is a good thing. :-) Thanks for the comment.

Hi Angie, back lighting is the best way to show the color! And also to rim the glass. Thanks for the comment.

Hi GiGi, and your husband will thank me! :D Thanks for the comment.

Hi Mimi, cocktails are pretty, aren't they? Thanks for the comment.

Oh, the name game!!! We used to have so much fun with that! Fun to see you and the Mrs. bringing it back. :) Fun drink for a fun day!

I love Irish whiskey so I'm going to try this for sure. It sounds great!

Hi Kelsie, Irish whiskey is good stuff, isn't it? As is this drink. :-) Thanks for the comment.

I don't enjoy cocktails but I do enjoy reading your blog and especially love your beautiful photography. I may also point out that people in the U.S. are still hostile to immigrants. Cheers, Rocquie

Hi Rocquie, the names change, the sentiment remains the same, eh? :-) Thanks for the comment.

... or you could call it The Patty Cocktail because you'll pat-pat-pat your tummy when your done drinking it! GREG

Never heard of this slur before ... anyways what is in the past stays in the past:). The drink color is amazing, I bet it tastes great as well

HI Amira, good philosophy! I'll drink to that. :-) Thanks for the comment.

Wow, this does sound good. Whiskey, bitters and sweet Vermouth. Can't argue with that!

Hi Frank, it IS really good. :-) Thanks for the comment.

They were not friendly to Greek immigrants too but I guess people are always prejudiced against anything new or out of the ordinary! This cocktail is amazing!

Sure does sound like a Manhattan, which is my favorite drink. I've been watching The Alienist, which takes place in 19th-century New York. I think this is the perfect thing to drink while watching.

Hi Katerina,I think almost all immigrants faced prejudice at one time or another, alas. And this IS an amazing drink! Thanks for the comment.

Hi Jeff, this would be perfect for that! :-) Thanks for the comment.

Now this sounds like a strong libation. So glad I can mix it up at home and enjoy it without having to drive afterward. ;)

Hi Carolyn, Uber and Lyft exist so we can drink these out. :-) Actually, we're lucky -- we live within a 30 minute walk of a lot of really good restaurants, and we like to walk, so we usually do (weather permitting). Thanks for the comment.

I can't believe I hadn't heard of this cocktail! And, I'm 75% Irish. I'm going to have try one for St. Patrick's Day this year!

I'm not really a whisky fan, which is sacrilegious considering I live in Scotland! But if I do have to drink it I do prefer Irish as it is milder in flavour and mixes with coffee really well. I would defiantly be willing to give this a sip or two, just to make sure ;)

Hi Emma, Irish whiskey and coffee pair so well, don't they? And after a sip or two of this drink, bet you'd finish the whole thing. :-) Thanks for the comment.

This is a cocktail that my husband would love. Perfect way to celebrate St. Patrick's Day this weekend.

Hi Karen, it IS the perfect way to celebrate. :-) Thanks for the comment.