A lighter version of a classic New Orleans Creole dish

One of our favorite comfort foods is red beans and rice—that spicy dish found everywhere in Louisiana. It’s particularly nice in cold weather because it warms you up in a hurry.

But it’s also a hearty dish, so it fills you up in a hurry too.

What to do when you want the terrific flavor of red beans and rice, but don’t want such a hefty meal? Just transform the dish into soup.

Red Beans and Rice Soup makes a great one-dish meal. But it’s not quite as caloric as the traditional version—which is a good thing for those of us still trying to lose that holiday bloat.

It’s also a smart way to celebrate Mardi Gras. Which arrives, of course, next week. 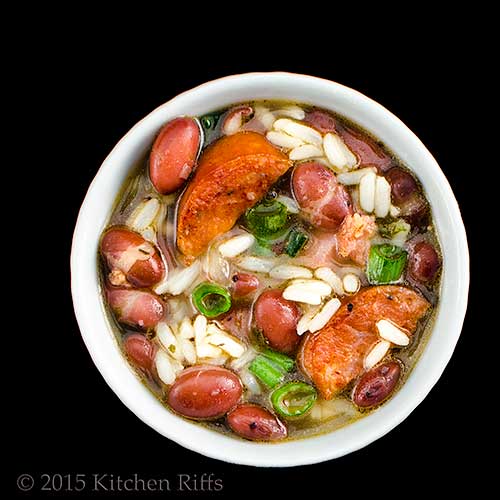 This recipe is a riff off our more standard version of Red Beans and Rice.

The classic dish is a thick stew served over heaps of rice (in fact, sometimes the rice seems to be the dominant ingredient). Our soup version is much brothier, so the stew part gets diluted. And we use much less rice—it’s more accent than centerpiece.

This dish does take some time to make. Soaking the beans requires at least an hour, then cooking time adds another 2 hours or more (most of it unattended). Prep time is half an hour or so—but you can do that while the beans are simmering.

This recipe makes 4 to 5 quarts (or even more, if you like a really soupy soup). So serve it when you’re expecting a crowd.

But leftovers freeze really well, too. So you can make this recipe and have soup for a month. 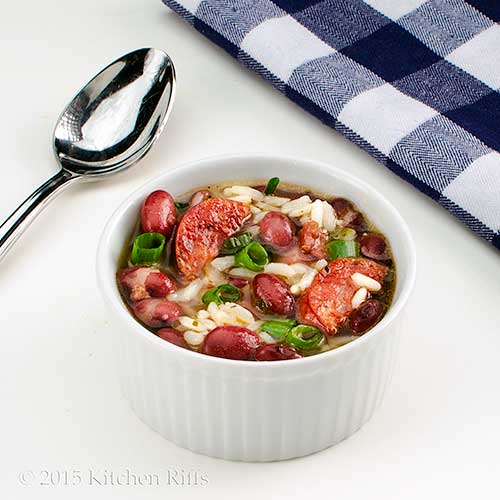 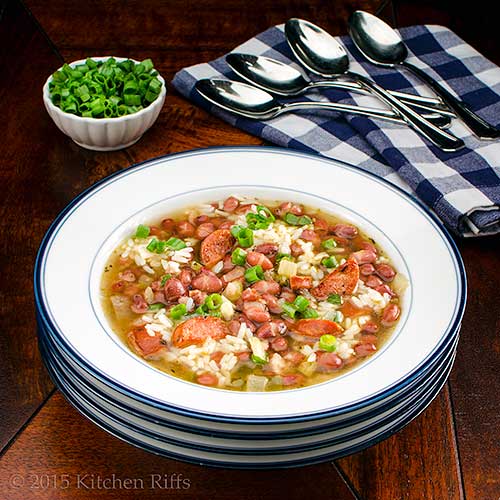 “So I can never remember the difference between Cajun and Creole food,” said Mrs. Kitchen Riffs, spooning her Red Beans and Rice Soup.

“Well, Cajun food tends to be rustic,” I said, between slurps. “While Creole is more European-influenced. Creole dishes tend to be a bit fancier, and are quite common in New Orleans restaurants.”

“Either way, this is yummy stuff,” said Mrs K R. “All the flavor of the mother dish, but not nearly as heavy.”

“Yup,” I said. “In fact, the flavor seems even more souped up than the original version.”

“But you appreciated my soup-to-nuts explanation of Cajun and Creole cuisines?” I said.

You may also enjoy reading about:
Red Beans and Rice
Chicken and Andouille Gumbo
Winter Squash, Corn, and Bacon Chowder
Chunky Pork and Sweet Potato Chili
Celery Root (Celeriac) Rémoulade
Fennel Soup with Shrimp and Beans
Or check out the index for more recipes
Posted by Kitchen Riffs at 9:15 AM