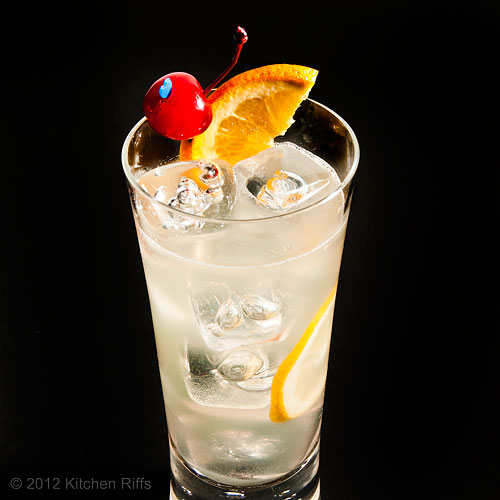 When the weather turns warmer, we turn to coolers.  Preferably of the tall, slow sippin’ variety.

The Tom Collins is a classic cooler, with a crisp lemony flavor that beats the hottest sun.  It’s gin-based, but you can make an admirable alcohol-free variety for those who don’t drink.

It’s refreshing and delicious — what more could you ask? 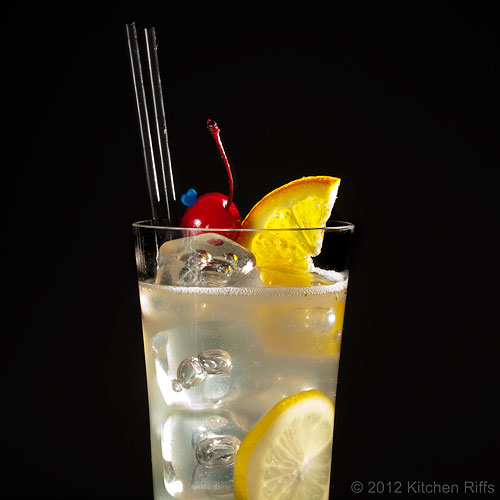 The Tom Collins is the “little black dress” of cocktails: classic, timeless, and always appropriate. Though it waxes and wanes in popularity — it’s probably waning at the moment, overshadowed by the Mojito — you know it’s always there, just waiting for the proper occasion.

And that occasion is, well, any time the weather is hot and you’re thirsty! This is a versatile beverage. It’s great to sip poolside or at a summer cocktail party.

For this drink, you should use a tall glass that holds 10 to 14 ounces (12 is ideal). The recipe serves one, but as with other cocktail recipes, you can easily scale it up to make any number of drinks. Mixing time is 5 minutes (or less). 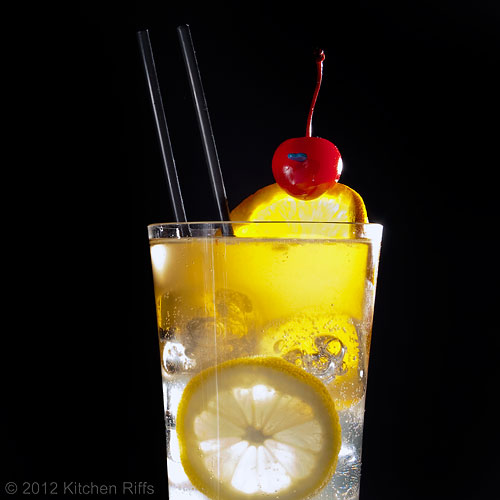 How Did the Tom Collins Get Its Name?

One reoccurring theme whenever we discuss cocktail history is how little there really is of it. In most cases, it’s hard to nail down facts and dates concerning a particular drink’s origin.

And this is definitely true with the Tom Collins. David Wondrich, cocktail historian extraordinaire, writes in Imbibe! that the Tom Collins originated in England around 1830. But its original name was the John Collins (today a John Collins is a Tom Collins in which whiskey replaces gin). The drink may have crossed the pond to America in the 1850s. By 1865, there are references to it in US print sources. By the time Jerry Thomas, author of one of the earliest authoritative books on American Cocktails, included the drink in the 1876 edition of his Bartender’s Guide, the drink had become the Tom Collins.

Why the name change? Both Wondrich and Wikipedia recount the same story: In 1874, an extremely popular practical joke in the US was to ask a “mark” — friend or stranger — whether he’d seen Tom Collins. When the mark answered “no,” the jokester would claim that Tom Collins was talking about the mark to others — saying who knows what! And then the jokester would add that Tom Collins was right inside that bar over there, or around the corner, or wherever. As Wondrich notes, this all sounds “moronic,” but evidently people became upset that the mythical Tom Collins was talking about them — and they would dash off to find (and presumably silence) him.

Anyway, informed people speculate that around this time the drink became known as the Tom Collins — borrowing notoriety from the fictional gossip. 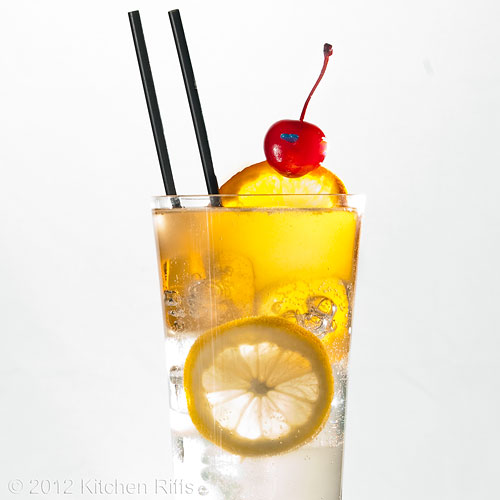 The Tom Collins — in fact, the entire Collins family of cocktails — belongs to a class of drinks that Gary Regan categorizes as Sparkling Sours in The Joy of Mixology. Traditional sours, like the Whiskey Sour are shorter drinks, often served chilled but without ice. One could make the case — I would — that many other citrus-based drinks fall into the “sour” category (it’s citrus that provides the sour flavor): like the The Classic Margarita, The Classic Daiquiri, and The Sidecar.

Essentially, the Collins family contains drinks that have a base spirit, with lemon juice and sugar as the primary flavoring ingredients. A Collins-class drink is served in a tall glass and topped with sparkling water (which is why Regan calls them “sparkling” sours). Oh, and a Collins always features a traditional garnish of orange wheel (or slice) and maraschino cherry.

Although the Mojito and Gin and Tonic also contain citrus juice and are served in tall glasses topped with fizzy water, they don’t qualify as Collins-style drinks because both are made with lime, not lemon. Moreover, in a Mojito, the mint is muddled in the glass (which puts it in the julep family — don’t ask). In the Gin and Tonic, there is no sugar, and the fizzy water is tonic, which has a distinct flavor of its own (unlike the neutral flavor of club soda or seltzer).

Do some of these distinctions sound arbitrary and illogical? Why, yes they do. But they are what they are.

Fortunately, you don’t need to know any of this stuff to enjoy a Collins. And after you’ve had a couple, you’ll forget it all anyway, right?