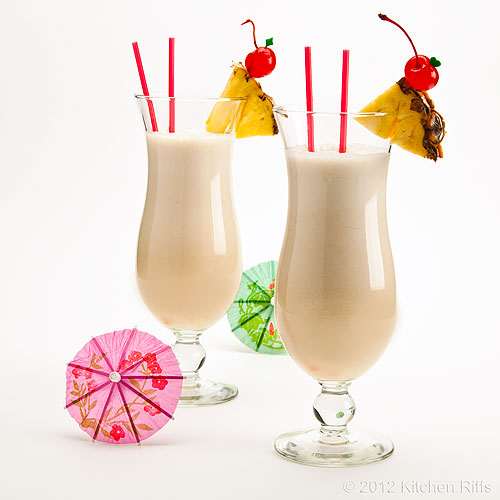 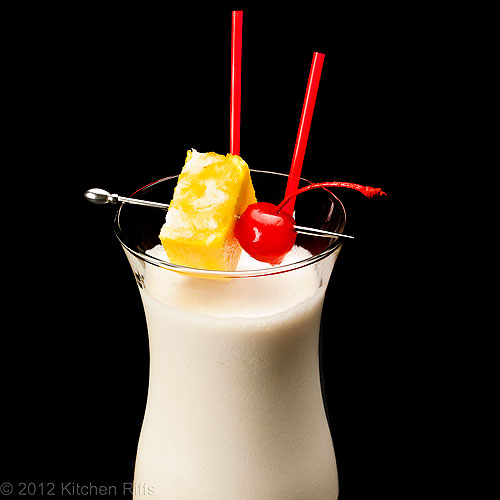 The Piña Colada is the official beverage of Puerto Rico. It was created there — at the Caribe Hilton’s Beachcomber Bar in San Juan — sometime in the 1950s by Ramón Marrero, one of the hotel bartenders.

Although you can make this drink in a cocktail shaker, it’s better when mixed in a blender. Indeed, this was the first frozen drink designed with the blender in mind. Other drinks we commonly see in frozen form (the Daiquiri or Margarita, for example) are actually better when they’re shaken and served “up,” not frozen.

The Piña Colada’s distinctive flavor comes from the combination of pineapple and coconut cream, specifically Coco López Cream of Coconut.  (There are other brands out there, but this is the original and best; you can find this at virtually any grocery store). The rum used in the original drink was white Puerto Rican rum. I prefer to use a combination of white and dark rum (I discuss some recipe variations in the Notes).

Although the rum adds a wonderful subflavor to this drink, it’s really the flavors of the pineapple and coconut cream that dominate. So this is a great drink to make for people who don’t want to consume alcohol — just make the recipe leaving out the rum, and you'll find the frozen emulsion of pineapple juice and Coco López makes an extremely satisfying nonalcoholic drink. (In fact on the back of the can the Coco López folks call the nonalcoholic – rumless – recipe the “Family Piña Colada.”)

This recipe serves 1, and takes about 5 minutes to prepare. I adapted it from Dale Degroff’s The Craft of the Cocktail. 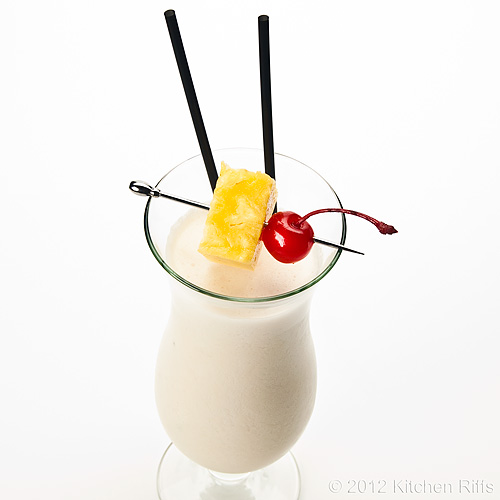 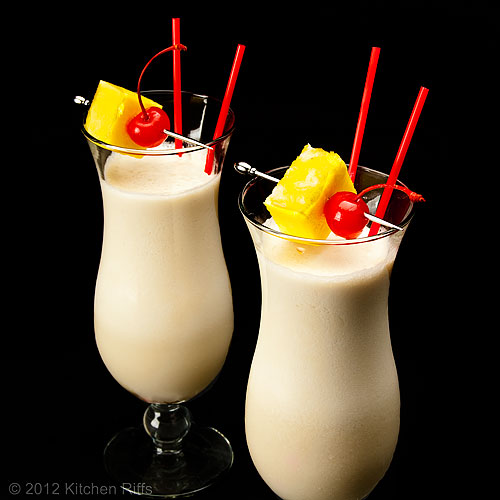 Stock Up on Coco López

“It’s about time you featured these,” said Mrs. Kitchen Riffs as she took her first sip of Piña Colada.  “This is one of my favorites.”

And it’s true.  Often when we’re on vacation (at some exotic destination or on a cruise), this is the cocktail that Mrs K R orders.

“You’ll be glad to know that I bought plenty of Coco López,” I said.  “And extra little cans of pineapple juice.  So we can make these whenever we want.”  The rum and heavy cream we always have on hand here at Bar Kitchen Riffs.

We chatted for five minutes or so, and then I noticed her glass was empty.  As was mine.  That’s the one downside of these beauties — they drink so smooth and easy that they go down
quickly.  But you need to be careful, because they have a goodly amount of alcohol in them.

“Not at some places I could mention,” harrumphed Mrs K R as I fixed us another round.  “Lots of barkeeps seem to forget the rum when they make these.”

“Maybe you got the 'family' version by mistake,” I ventured.  “Or they thought you were too, ahem, juvenile to drink.”

“Yeah, well, you know my motto:  Youth is fleeting, but immaturity can last a lifetime.”

And we drank to that!