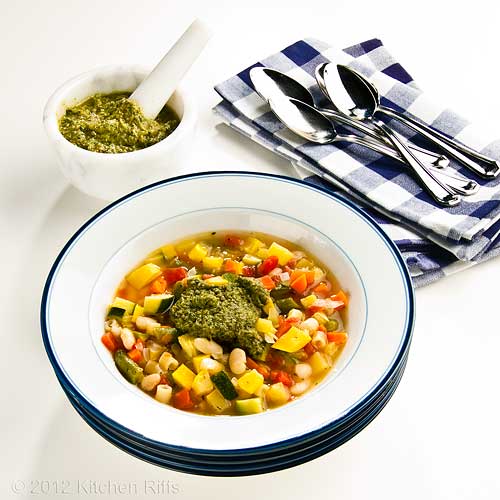 Pesto Is the Classic Garnish for this French Provençal Vegetable Soup

Pistou is the French version of Pesto sauce. It is most often associated with the Provençal dish, Soupe au Pistou.

Although you can serve Soupe au Pistou almost anytime, it’s best from late spring through early fall (which is basil-growing weather). So it’s in season right now. And it’s versatile — the best versions contain whatever vegetables are in season and fresh.

So all that zucchini and summer squash that’s coming online in your garden, or overflowing the bins at your farmers’ market? This soup is their fate. 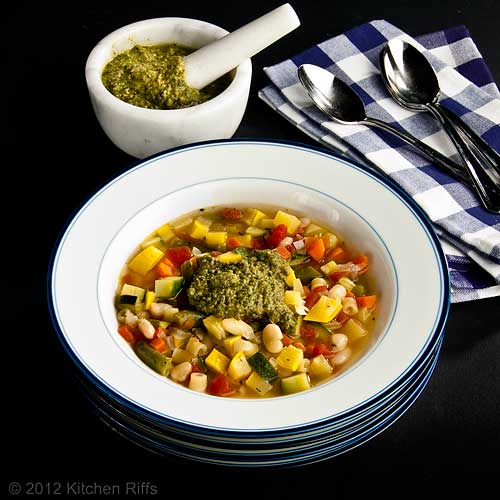 Unlike Italian Pesto, French Pistou usually does not contain nuts of any kind.  It may contain tomato (I omit tomato from the sauce, and instead add it to the soup itself, so I still have its flavor). Traditionally, it didn’t include cheese, although these days the inclusion of Parmesan or sometimes Swiss cheese is common. If you’re making your own Pistou (or Pesto), it’s easy to omit the pine nuts — though you can certainly include them if you wish. I often do (particularly when I’m using frozen Pesto). Although this dish tastes better with your own homemade Pistou (use the instructions for making Pesto in my Pesto Pasta post, omitting the nuts), supermarket Pesto works well too (you’re unlikely to find supermarket Pistou!)

Exact measurements aren’t necessary for this recipe, nor do you need to use the exact mix of ingredients I specify.  We’ll talk about substitutions in the Notes.  If you look at cookbooks, you’ll see that no two recipes are exactly the same (though there’s a strong family resemblance among them).

About the only rule for this soup is that it should contain white or kidney beans (or both, though I prefer white beans).  Either canned or dried work well.  I like Cannellini or Great Northern beans in this dish.  Green beans (string beans) are also traditional, but not mandatory.

My recipe calls for chicken stock, but you can easily omit it and turn this into a vegetarian soup.  If you make your Pistou without cheese this becomes a vegan recipe (in this case you'd want to include the nuts to help give body to the sauce).

My two favorite recipes for Soupe au Pistou come from volume 1 of Julia Child’s Mastering the Art of French Cooking and Richard Olney’s Simple French Food. Although my recipe differs from theirs, they taught me how to make this soup.

Preparation time is 15 minutes or so, cooking time about 45 minutes.  This recipe yields 3+ quarts of soup.  Leftovers freeze well (but don’t add Pistou to soup that you’re going to freeze; see Notes). 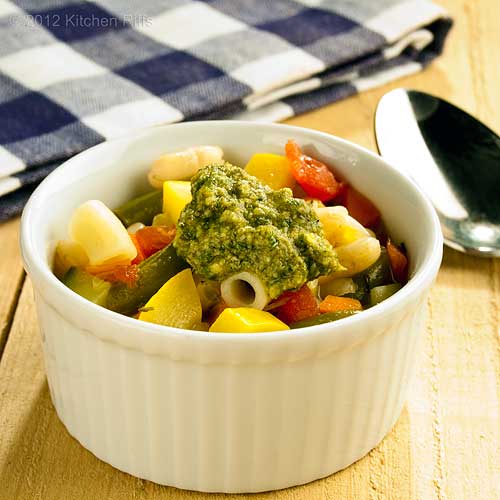 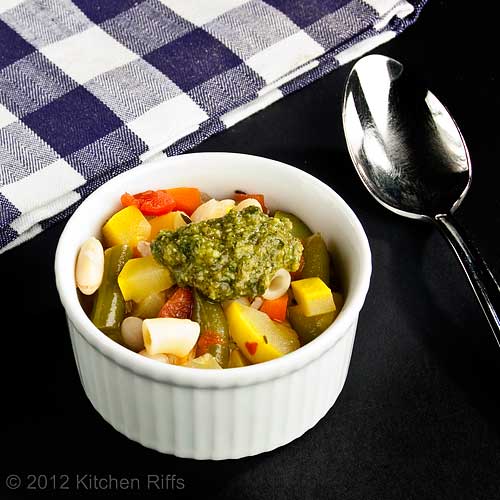 This week, I’m featuring two recipes with a French theme.  Why France, and why this week?

Well, in the US we just celebrated the 4th of July — commemorating the day the original 13 US colonies declared independence from the British Empire. But the US might have lost the war that followed that declaration had it not been for assistance from France. French aid at first was covert — they provided munitions and other goods to the colonies through the neutral Dutch West Indies. But in 1778, the French government officially recognized the United States as a nation, and soon thereafter the British declared war on France.

The war between Britain and France had some major benefits for America:  It kept lots of British troops occupied across the Atlantic, so they couldn’t be sent to the colonies to fight.  It also gave France a reason to aid the US directly (to harass their enemy, Britain).  Moreover, because France posed a serious threat to Britain’s security, going to war with France gave the British an incentive to end their struggle with the American colonies so they could focus their efforts closer to home (the colonies were nice for trade, but they also were a distraction).

So this Soupe au Pistou recipe is my culinary shout-out to France, thanking her for the help she gave us in founding our nation.  Merci beaucoup!