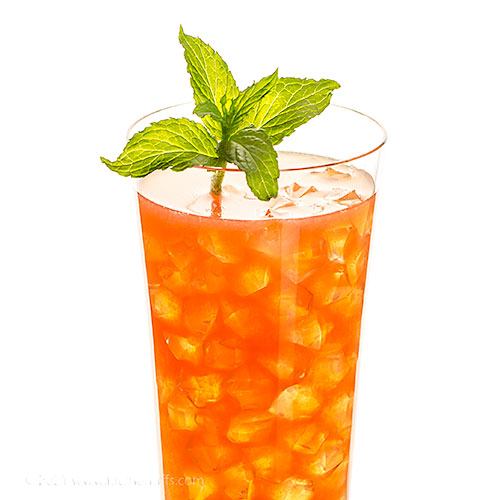 Need mint in your julep? We’ve got that.

But this drink offers a twist on the julep theme, using rum instead of bourbon. (Two rums, in fact.) Plus two fruit juices and other assorted ingredients.

So making this cocktail is a bit of a production. But totally worth it. 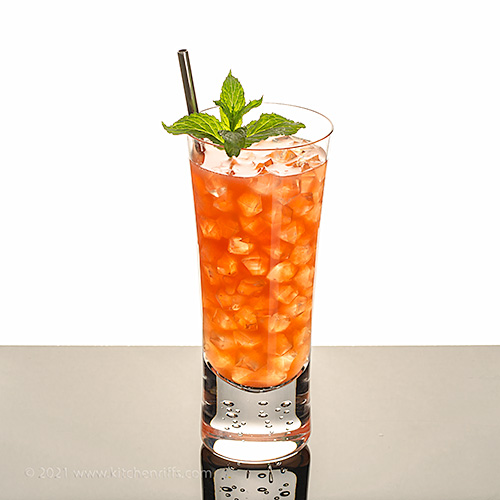 You probably know the Mint Julep Cocktail.  It’s made by muddling mint with sugar (or simple syrup) in a glass, then adding crushed ice and topping up with bourbon.

Less well known is the Rum Julep, a drink devised by Tiki maestro Donn Beach (who started the whole Tiki craze with his Don the Beachcomber restaurant chain).

About the only thing the Rum Julep shares with its more famous sibling is mint (used as a garnish here). And of course the “julep” name (more about that in the Notes).

We got our recipe from Jeff Berry’s Sippin’ Safari. The recipe takes about 5 minutes to prepare and serves 1. 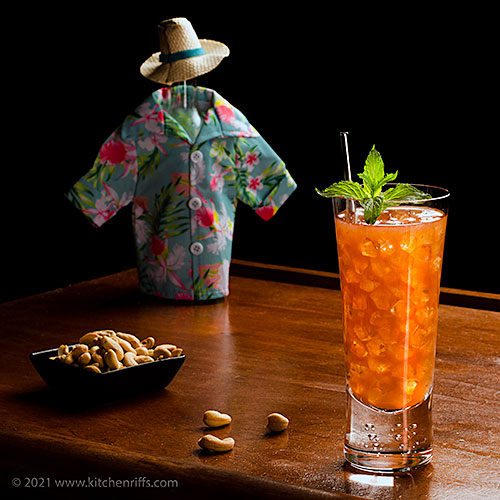 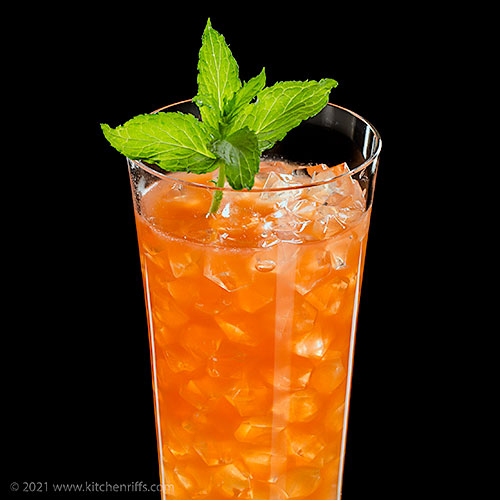 Take a Shot of This

“Great drink,” said Mrs Kitchen Riffs. “This medicine will cure what ails you.”

“Just what the doctor ordered,” I said.

“Better than a spoonful of sugar to help this go down,” I said. “Heh, heh!”

“I’ve heard laughter is the best medicine,” said Mrs K R. “Not that I’d know about that from your ‘jokes’.”

Oops. Think Mrs K R just delivered a dose of my own medicine.

What a beautiful and tasty cocktail! I love the 2nd shot the most, but the one with Hawaiian shirt and hat looks fun, John.

Hi Angie, some good friend let us borrow that shirt and hat for a prop. :-) Thanks for the comment.

I have had mint julep but never a rum julep. Time for something new ;)

Hi Pat and Dahn, this is really good -- loads of flavor. :-) Thanks for the comment.

My son and dil are flying in tonight. We were supposed to go to the beach but Covid had other plans for us. Instead we are hanging out by the pool here. I think this might be a perfect "pretend we are in Florida instead of Alabama" drink!

Hi Anne, this is an excellent beverage for poolside drinking. :-) Thanks for the comment.

I've never had a rum julep but I have a feeling I would love them!

Hi Pam, we hadn't had one until this summer, either. And we DO love 'em! :-) Thanks for the comment.

Love the mini 'beachcomber' shirt prop in the background! And the cocktail looks spectacular. Gotta be careful though- this drink looks like it could go down real easy, in fact, maybe a little TOO EASY!

Hi Fran, the going down too easy part is a real danger with a lot of Tiki cocktails. They have a smooth taste that hides the amount of booze in them. So yeah, two of these are the limit. :-) Thanks for the comment.

New to me: falernum -- not familiar at all. Sounds like a good mixer.

Hi Mae, falernum is a great mixer -- very nice flavor. A frequent ingredient in Tiki drinks. :-) Thanks for the comment.

Oh my goodness! Mrs. KR is killing me! Im https://savoryspin.com/spicy-baked-smores/ getting a good chuckle over this helping with all my ails and the healthy honey simple syrup! Gorgeous drink BTW- makes me wanna go looking for Demerara rum!

You had me at rum - looks delicious! And love that cute Hawaiian shirt, too!

Hi Laura, we've really grown to love rum! So many varieties, so many flavors. :-) Thanks for the comment.

When notes WAY longer than the recipe itself lol. Terrific cocktail - delicious and elegant!

Hi Ben, yup, and we have a recipe in the Notes (honey syrup), plus a link to another recipe. :-) Thanks for the comment.

Its so fun heading to the tropics, even if it is in your own kitchen. Love this fun one with all the rum. Just checked out your recipe for grenadine, need to make a batch of this as soon as pomegranates are in season which will be right around the corner.

Hi Bobbi, it's fun to "travel" through food and drink, isn't it? :-) Thanks for the comment.

wow fabulous photos as ever! that ginger and lime syrup sounds the bomb. Yum. what a drink this is!

You know, sometimes you just need an umbrella drink (what you call a Tiki drink). While this one seems complicated, it sounds like it’s worth every grueling minute! ;)

Hi Sherry, it's good stuff. :-) Thanks for the comment.

Hi David, thought about adding an umbrella to this one for garnish, but decided against it. :-) One of the things about Tiki drinks is they DO tend to be complicated. And often call for ingredients that most people don't typically have on hand. Which can make them a pain to make, alas. Good, though. Thanks for the comment.

I love mint julep, but this looks SO much better.

Hi MJ, lotta flavor in this drink. :-) Thanks for the comment.

Beautiful! I find that recipes that are "a bit of a production" are usually well worth it. :-) ~Valentina

Hi Valentina, definitely worth it! :-) Thanks for the comment.

Gorgeous! And I bet it's perfect for sipping around the pool!!

Hi Liz, definitely nice to enjoy this poolside. :-) Thanks for the comment.

John,
I'm smitten by your photography sense, such fabulous capture. Yes, the beverage looks and sounds great, but your pictures are speaking a thousand volumes. Awesome

I'm all for the rum julep because we are in Rum country here, and it's delicious. Of course this is a good medicine, how could it not be. Your photos are beautiful, you have a the knack.You know how to enjoy Summer. Thanks for an enjoyable post.

Hi Hasan, aw, thanks so much for that kind comment. :-)

Hi Pauline, you're SO lucky being in rum country! We love the stuff. :-) Thanks for the comment.

That's fascinating about the origins of the term "Julep.'' That's fun info I'll definitely drink to learning more about. ;)

Hi Carolyn, research is so rewarding, isn't it? :-) Thanks for the comment.

Hi Inger, a really good one, too! Thanks for the comment.

Hi Balvinder, we went kinda Tiki mad this summer. :-) Thanks for the comment.

I was certain I’d left a comment here already, good thing I checked! This is such a pretty drink, love the colour and the sparkle of the ice! Will need to check the LCBO if they have that specialized rum.
Eva http://kitcheninspirations.wordpress.com/

Hi Eva, glad you checked! Alas, the Blogger software sometimes has problems with comments (seems to be most troublesome with people using Apple phones and tablets, although not Apple computers. So weird.). Anyway, isn't this nice? SO good! Thanks for the comment.

This drink sounds like it packs a flavorful punch. Sounds perfect for a Monday if you ask me ;)

Hi Laura, we all need a flavorful punch every Monday. :-) Thanks for the comment.

This drink looks amazing - I'm a real fun fan... thanks

Hi Judee, it's really, really good. :-) Thanks for the comment.

That cocktail bring vibrance to me! reminds me of summer, travel and happy times. With this pandemic we have now all we can do is enjoy cocktails like that.

Hi Raymund, something we can all drink to, I think. :-) Thanks for the comment.