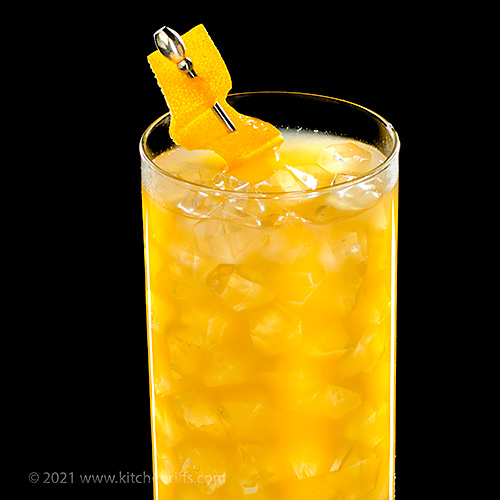 It’s hot outside (where we live, at least). So let’s seek relief in liquid refreshment.

Fearless ingredients combining forces to beat the heat? A heroic feat of satiation, we say. The Nui Nui was created by Donn Beach, who kicked off the Tiki craze when he started his chain of Don the Beachcomber restaurants during the 1930s. Like many of his drinks, the Nui Nui calls for rum, fruit juice, and some specialty syrups – in this case, vanilla simple syrup and cinnamon simple syrup. You can buy both of these, but it’s easy enough to make your own (recipes and instructions are in the Notes).

Our recipe comes from Tiki maven Jeff “Beachbum” Berry. Check out the Notes for an alternate formula. 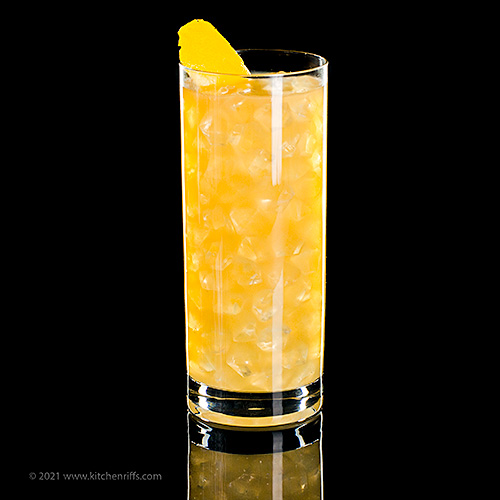 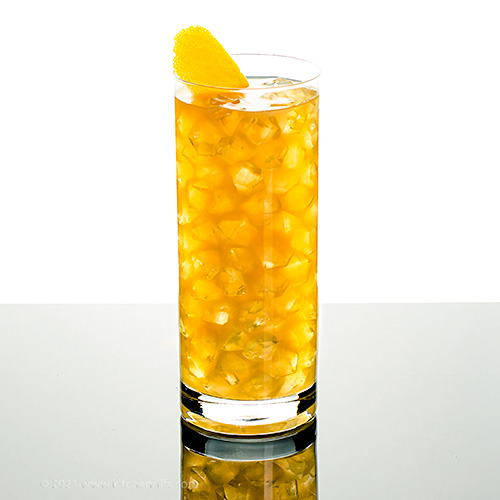 “Great drink!” said Mrs. Kitchen Riffs. “I hear it originally was called the ‘Pupule,’ which means crazy in Hawaiian.”

“Yup!” I said. “Inspired by Louie Louie, that great tune from our youth:

As usual, I laugh at the puns. The song cracked me up, but I am a threat to alter lyrics all the time!
The drink sounds perfect for summer nights on the porch, under a fan!

Hi Anne, this is a GREAT summer-on-the-porch drink. :-) Thanks for the comment.

I'm with Angie---your last lines made me giggle! What a great cocktail to sip around the pool!

Hi Liz, this is a wonderful pool drink! :-) Thanks for the comment.

I always enjoy the conversation between you and your Mrs. :-)) The cocktail looks so beautiful that I want one too, John. Gorgeous shots!

Hi Angie, we really enjoy writing those endings. :-) Thanks for the comment.

We’ve got a birthday boy in our house (my husband) and I was looking for a special tipple. I have got everything I need except for cinnamon syrup which, as you say, is easy to make.

Hi Greg, hope the birthday boy has a most excellent day! :-) Thanks for the comment.

Looks like a great summer drink and sounds delicious

Hi Pat and Dahn, it's good stuff. :-) Thanks for the comment.

I met a Hawaiian named Nui Nui, which means great in Hawaiian. He was quite a character!

Hi Mae, this is a great cocktail, so that makes sense. :-) Thanks for the comment.

Ooo that's my kind of cocktail - (relatively) light and fruity. I bet it would be good with lavender simple syrup, too :) Beautiful pictures as always!

Hi Ben, definitely on the fruity (and spicy) side. :-) Thanks for the comment.

That is one fabulous supper sipper! If you close your eyes, you might feel like you have escaped to a tropical island.

A lovely Summer cocktail on the porch no doubt, and I'll save this for our Summer howver Rum is a very satisfying Winter drink here as well. It won't be long, heaven forbid, and I'll be using it to make our Christmas cake. You would love our Queensland Bundaberg Rum for sure. Enjoy your Summer on the porch.

Hi Pauline, although we usually drink this in the summer because it's such a refreshing drink, the spicy flavor of this would be nice in the cooler months as well. I really need to look for Bundaberg rum -- sounds interesting. :-) Thanks for the comment.

I love this color!

My husband is a haole who loves anything Hawaiian-inspired. I'll have to try this out on him.

Hi Natalia, good flavor, too. :-) Thanks for the comment.

Tropical and so refreshing!

Hi Denise, and really good. :-) Thanks for the comment.

That looks like pure liquid sunshine. And the cinnamon is a surprising and wonderful addition.

Hi Carolyn, the cinnamon adds a nice flavor tone to this. :-) Thanks for the comment.

I am dreaming myself lounging on the couch in front of the AC and enjoying this fruity cocktail.

Hi Balvinder, a worthy dream. :-) Thanks for the comment.

Having been to Rapa Nui (where “nui” means big), this cocktail is definitely big-big! I need to get some allspice dram — and have (or can make) everything else. This is perfect for the weather we have been having!

Hi David, we have more drinks coming up that require allspice dram, so you'll be wanting a bottle. :-) Thanks for the comment.

I have not been drinking cocktails, but I do love rum and this looks really good and refreshing. I can understand how this would be great on a hot summer day.

Do I see new crushed ice in those photos? They look great. What a pretty drink, perfect for the hot, humid days we’ve been having.
Cheers
Eva http://kitcheninspirations.wordpress.com/

Hi Eva, you do! And it's been REALLY hot and humid here lately, so this is welcome. :-) Thanks for the comment.

Wow - love the citrus and spice combination in this cocktail!

This would make the heat feel a whole lot better!

You seem to be on quite the tropical kick this summer. A vacation, for an hour or a week, is always welcome :)

Hi Laura, well it's summer. :-) And we've had fun with Tiki drinks this year! Thanks for the comment.