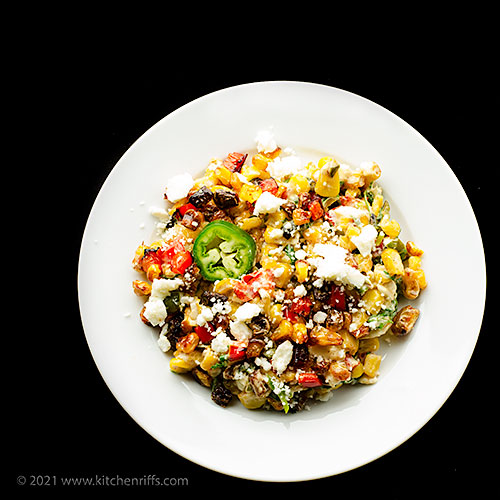 Did someone say “fresh sweet corn”? It’s in season around here, so let’s enjoy it to the max!

No need to wrestle with a slippery cob, though. For this dish, we cut off the kernels and roast them, then add a lively mayo- and cheese-based dressing.

In Mexico, the dish is known as esquites, and it’s very popular. Once you taste it, you’ll know why. 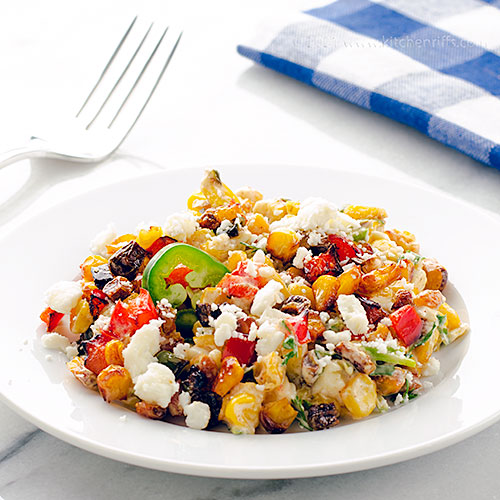 It’s traditional to prepare Mexican street corn by grilling it. But we think it’s easier to roast the kernels in the oven. It makes for a simpler dish, and we think the flavor is actually better. Besides, when you roast the sweet corn, you can add other goodies along with it, which gives your salad more flavor and interest. For this recipe, we’ve added jalapeño and red bell peppers to the mix for extra goodness and color.

Prep time for this dish is about 20 minutes. Plus you’ll need another 20 minutes or so to roast the sweet corn mixture.

This dish yields about 4 servings when plated as a starter or side dish. 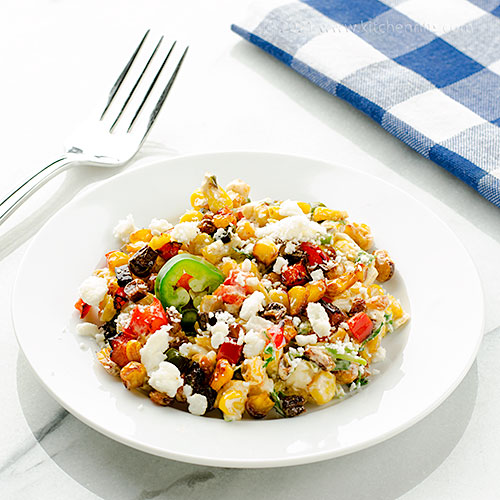 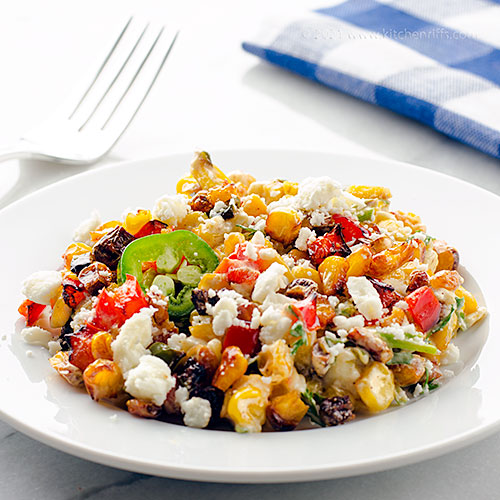 “Delicioso,” said Mrs. Kitchen Riffs. “And about as close to Mexico as we’re likely to get for a while.”

“Yeah, thought we escaped the pandemic after getting vaccinated,” I said. “But the delta variant circled back.”

“At least we can console ourselves with this dish,” said Mrs K R. “The dressing is so good I could eat it by the spoonful.”

Maybe. But after what we’ve been through in this pandemic, I’ll stand by my words.

Grilled sweet corn is definitely something I need to do more as my husband does enjoy them. But since I don't have a grill, roasting in oven is even better for me. This looks so colourful and deliciously healthy. Thanks for sharing, John.

Hi Angie, roasting in the oven is SO easy! If you want your corn on the cob, we roast in the oven without shucking -- then shuck when cooked. Incredible flavor that way. :-) Thanks for the comment.

Hey, that's a great idea to roast corn without first shucking (ah, shucks)! I never thought of that! I live 6 miles from the Mexican border so no problem getting the ingredients for this dish!

Hi Fran, you need to try that. :-) And I envy you your location -- you must get incredible ingredients! Thanks for the comment.

John, this sounds delicious and lively! And even though it's fresh corn season right now, it's good to know about using frozen corn kernels. That makes it an easy year-round dish. Thanks!

Hi Terry, we think frozen corn is just as good as fresh in this dish. But at this time of the year, it's fresh all the way! :-) Thanks for the comment.

Nothing better than fresh, summer corn. I'm waiting for our garden to grow then I'll be making this

Hi Pat and Dahn, corn season is wonderful, isn't it? :-) Thanks for the comment.

So fresh and summery!! I love the corn this time of year!

Such a tasty flavorful EASY and QUICK dish! Like you, i prefer the taste of oven baked corn to grilled corn and I am so looking forward to making this!

Hi Shashi, we're all about quick and easy. And flavor, of course. :-) Thanks for the comment.

I love this. It's a perfect summer meal.

Ha ! Since I am at Mexican 101 and corn dishes 102 this recipe will be set aside for my next cookery lesson - interesting and promising heaps of taste ! love both the salad ingredients and the dressing tho' may use my imagination to get rid of the mayo I do not usually use . . . Ha ! In the Sydney Basin we shall be in hard lockdown for at least a couple of months but over 80$ of the population feel that is the way to go . . .

Hi Eha, the mayo is good in the dressing, but there's probably a workaround. You could probably use just crema or sour cream and a bit more lime juice. Different flavor, but a good one, I'd think. Thanks for the comment.

oh how summery and delicious does this look and sound. just found out we have to wear masks for another week! boo hoo ...

I love the combination of textures and flavours as well as the vibrant colours. And with this cheesy dressing? Yes please!

Hi Sherry, this really is delish. :-) Thanks for the comment.

Hi Ben, the dressing is SO worth making -- even if you don't make the corn salad. :-) Thanks for the comment.

My husband would love this salad since it isn’t green. I love corn, especially fresh corn.

Hi Gerlinde, we love fresh corn, too! :-) Thanks for the comment.

Well don't you have great timing. I have two ears of grilled corn to cut off the cob and make a salad with tomorrow. Love this one and I have everything for it. It's going to go great with grilled chicken. Thanks John!

How beautiful and its a brilliant idea to bake the kernels. Such a pretty and flavoursome dish, great for corn season and entertaining.

Hi Merryn, this definitely makes a nice entertaining dish. Or dinner on a weekend night. :-) Thanks for the comment.

This looks delicious especially right now when corn is so available. I definitely will give your recipe a try.

Love everything about this recipe. Thanks for sharing a great side dish idea.

Hi NCR, this is such a fun way to enjoy corn! Enjoy. And thanks for the comment.

Hi Lea Ann, you're welcome! :-) And thanks for the comment.

Could eat this every day! You know I love corn season!

There is a taco restaurant that opened not too far from me that everyone has been clamoring to go to...so I waited and finally tried it with a girlfriend last week. They do have fantastic tacos to be sure, but we ordered a side of street corn and honestly John, I could have made it lunch, nothing else. Something about that combination of sweet corn with a bit of heat and Mexican spice...SO GOOD!

I can't wait to try this!

Hi Barb, love street corn. And yeah, it could be a whole meal. :-) Thanks for the comment.

Yummy in my tummy.

We loved it! This is a keeper and one that I'm sure we'll make many more times in the future. Thanks!

Hi MJ, glad you liked it! :-) And thanks for letting us know.

I love the combination of flavors and textures in this Mexican street Corn recipe. Already made a couple of times this summer after learning from Abbe last year and posted with purple corn.

I love every single ingredient! This is my kind of salad.

Hi Balvinder, Mexican street corn is such a classic dish, isn't it? Love it! Thanks for the comment.

This time of the year, sweet corn is sublime. However, the on the cob version is a wholly mess. Love your idea to cut it off the cob with all the delicious flavors of Mexican street corn. Stay well and take care

Hi Bobbi, sometimes we're up for messy eats, but most of the time we want something we can plate and eat with a fork. Hence, this dish. :-) Thanks for the comment.

Corn is a big favorite in my home! this looks so colourful and summery

Love love love this. I’ve made a version, and what I like about this kind of recipe is how many versions are possible. Endless, really. I like that you included jalapenos!

Hi Nammi, it's a favorite with us, too! :-) Thanks for the comment.

Hi Mimi, you're right that there are endless versions of this. Which we like, a lot, too. :-) Thanks for the comment.

It really doesn't get much better than sweet, crisp summertime corn. This recipe is brilliant -- I want a bowl (or 12!) of it right now. :-) ~Valentina

Hi Valentina, brilliant works for us. :-) Thanks for the comment.

I have to admit that while I love the visceral pleasure of gnawing on corn on the cob, I love it even more with the kernels removed and tossed with vibrant ingredients like these. That way, you're assured to get a little bit of everything in each bite. ;)

Hi Carolyn, it's having all the flavors in each forkful that we really like about this dish. :-) Thanks for the comment.

This sounds so tasty - such a flavorful and light dish that gets my mind off the delta variant for sure!

Hi Shashi, this is really, really good. Really good. :-) Thanks for the comment.

Sweet corn salad is all time favorite but I never tried adding cheese in it. This sounds so delicious....

Hi Priya, the cheese adds a nice pop of flavor -- worth a try sometime. :-) Thanks for the comment.

It’s extremely disappointing to see the low vaccination rates in the US, it will keep the pandemic going for sure. The variant is in Ontario too (not sure how as our boarders are still closed🤬) but because our vaccination rates are high, it’s not taking as many people out. I’ll be so happy when this is over.
The dish looks absolutely delicious, I really must try it, particularly the dressing. A little shredded chicken in a wrap would make the perfect picnic food!
Éva http://kitcheninspirations.wordpress.com/

Hi Eva, like the idea of adding some shredded chicken, and serving this as a wrap. MUST try that. :-) Thanks for the comment.

That's a beautiful salad with lots of contrasting colors. Perfect for summer here.

Hi Holly, we love color in food! Flavor, too. :-) Thanks for the comment.

This dish would definitely cheer me up despite the pandemic news. Fresh corn is the best! Love these flavors.

Hi Lisa, fresh corn is great! And so good in this dish. :-) Thanks for the comment.

I always love paring this this grilled steaks

Hi Raymund, this is wonderful with grilled meat! :-) Thanks for the comment.

John, I'm making this sometime this week!! And I seriously can't wait to take a bite of this Mexican street corn salad!! 😍 Wonderful recipe!!

Hi Marcelle, isn't this a neat dish? SO good! :-) Thanks for the comment.

John - I don’t know how I got so far behind on my reading…. I guess my really job took over! I am so happy to find t his recipe today - I literally just bought almost all the ingredients at the farmers market, I just need to get some cotija! Thanks — gorgeous and flavorful!

Hi David, tough when real life gets in the way of pleasure, isn't it? :-) Thanks for the comment.

Love Mexican Sweet Corn--why have I never made it! And I am totally with you on the idea that a recipe needs to be practical.

Hi Inger, this is such a nice dish. And it's corn season! :-) Thanks for the comment.

Corn season is so welcomed in my family. Being from Iowa originally, we can never get enough sweet corn, on or off the cob. I am anxious to try your recipe John and totally agree with roasting and increased flavor! Thanks for sharing!

Hi Roz, corn season is terrific, isn't it? And we LOVE roast corn. :-) Thanks for the comment.