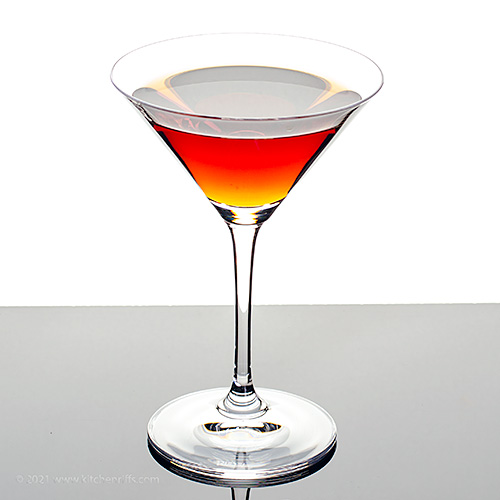 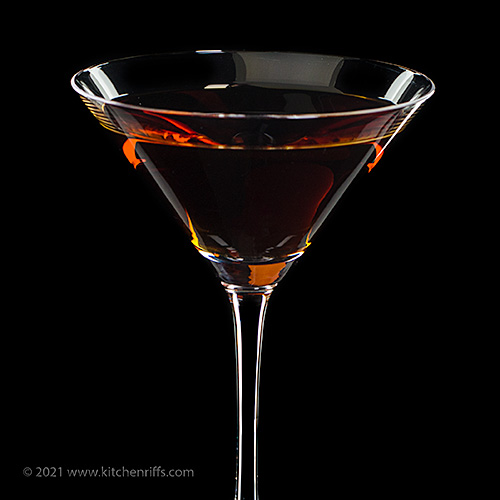 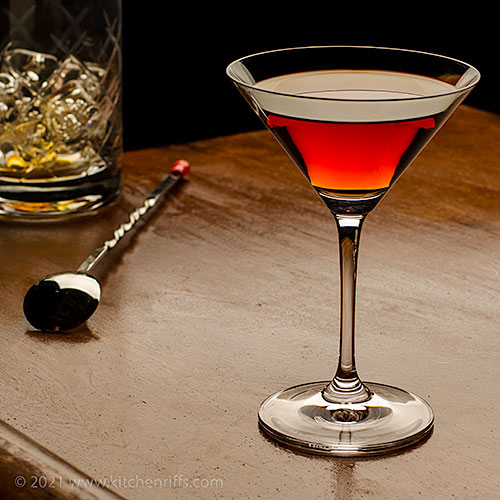 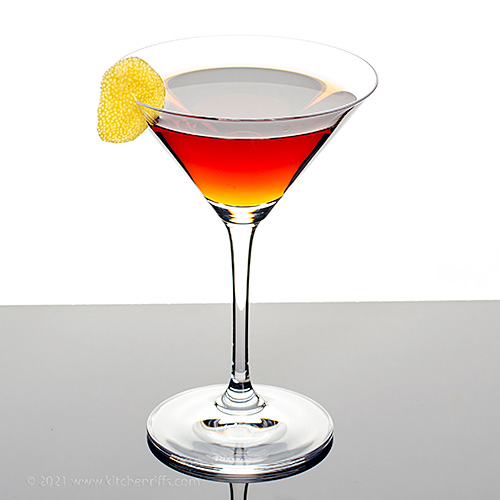 Always love to read your extensive cocktail knowledge! Yes, we all can't wait to party (responsibly) again. Be safe and well!

Hi Debra, we enjoy any kind of research, and there's so much to learn about cocktails! Plus when you're finished, you get to drink your research. :-) Thanks for the comment.

Your cocktails are out of this world. Thank you and Prost !

"Let the Good Times Wait". That's clever, but this cocktail means we can celebrate at home. Thanks. I'll put the effort into finding that liqueur! I usually say you can find anything in LA. This quest will be a test. GREG

Hi Greg, Amer Picon (or a substitute) is worth seeking out. In LA Torani Amer should be real easy to find, although I've read its flavor isn't quite right (can't get it here, so have never actually tasted it). We really like the Bigallet China-China Amer. Thanks for the comment.

John, we remember Mardi Gras celebrations in St. Louis well! This well made (and well-researched) cocktail sounds like a nice celebratory alternative this year. Thanks!

Hi Terry, this is such a great drink -- terrific flavor. :-) Thanks for the comment.

I always learn something new from you. My husband is a whiskey fan so I will have to pass this recipe on to him. Cheers!

You make the BEST cocktails! This looks so amazing.

Hi Angie, it IS amazing! :-) Thanks for the comment.

Rye whiskey is my favorite! It looks and sounds tasty.

Hi Pam, rye has delightful flavor, doesn't it? :-) Thanks for the comment.

Let the good times roll! We are with you. Just signed up for the vaccine at any place that would let me. Just hope it is before September!

Love your cocktail recipes. I
Heck, I don't even need a party__ a hot dog dinner with just a few people would be enough to satisfy my social needs right now!

Hi Abbe, we're signed up every place we know of, too. Can't wait to get it. :-) Thanks for the comment.

Hi Anne, a hot dog dinner would do us, too! :-) Thanks for the comment.

Gorgeous cocktail! I'm planning to make a king cake for the first time ever this year. I'd love one of these to go with it!

Hi Lisa, this would be great with a king cake. Or anything. :-) Thanks for the comment.

Yes, it would be nice to have a Mardi Gras party. We have some friends that we get together with every year for one and this would be a great cocktail to serve and enjoy. Unfortunately, last year and this year are no-nos. Let's all keep our fingers crossed that 2022 is party time!

oh wow this looks spectacular KR! great photos and a hefty drink - and i love bourbon. Apparently the vaccines are rolling out here at the end of this month. Hubby being disabled is definitely going to have it, and i think i will too. Still can't believe the idiot anti-vaxxers with their conspiracy theories... take care!

Hi Sherry, we're eagerly awaiting vaccine! Don't know when we'll get it -- technically we're in the group that's currently eligible to receive it now, but that's a big group. We know some people who've been lucky enough to get it, but not many. Fingers crossed! :-) Thanks for the comment.

Perfect timing for Mardi Gras! Love the cocktail, and the story behind it. I’m glad you mentioned the Ramos gin fizz, as that is one of Marks favorite drinks. I tried making them at home with little success, but had one when in New Orleans and it was fantastic. Also, I like your vaccine better at the end. Gotta love responsible parties! (I was fortunate enough to get my first dose yesterday so that I can safely be on campus.)

Hi David, glad to hear you got your first does of the vaccine! Exciting news. :-) We'll all be getting it eventually -- just need to be patient. The Ramos Gin Fizz is a hard drink to make. It requires a LOT of shaking. Never had one in New Orleans -- definitely something I need to experience. Thanks for the comment.

You need to host a photography class for taking epic photos of drinks!

Hi GiGi, we've actually thought about doing a post about cocktail photography against white and black backgrounds. It's a somewhat fiddly process, but lots of fun. :-) Thanks for the comment.

We don't drink but I always love reading your posts on cocktails and also how you always make them look stunning.

Hi Taruna, the neat thing about cocktails is even if you don't drink, they're usually fun to look at. And often have interesting histories. :-) Thanks for the comment.

Your cocktails always intrigue me. And while I want this "tongue tingler", what I really want today is a bowl of your Senate Bean Soup. It's chilly here in LA (well, for LA, anyway), and it sounds so comforting. :-) ~Valentina

I've always wanted to see what a Mardi Gras party was like! This looks amazing!

Hi Valentina, that's really good soup! And we're going to get snow this weekend, so we'll need both that and this cocktail to comfort us. :-) Thanks for the comment.

Hi Ashley, they're fun! Particularly with one of these in hand. :-) Thanks for the comment.

Hi John! I actually second that motion on a post outlining cocktail photography. You have nailed the process down to a science. I think this post would be long so you could split into a 3 part session or something like this...give it some thought. BTW, I love this drink!

Hi Bobbi, I've been thinking about this for quite a while. Maybe this summer, when we're doing our summer sippin' series might be an appropriate time. And it'd be at least two posts -- it's an easy process (in theory!) but there's a lot of stuff to keep in mind. :-) Thanks for the comment.

Not quite a fan of whiskey but I think this is a good one for guests.

Hi Balvinder, your guest will love it! :-) Thanks for the comment.

Katerina | Once a Foodie said...

Mardi Gras or no Mardi Gras, this sounds like one amazing drink! I love the colour, John, and glad to see another use for Amer Picon. I've never used Bénédictine liqueur before so had to Google it but it also sounds delicious.

Hi Natalia, doesn't this look nice? :-) Thanks for the comment.

Hi Katerina, Bénédictine has marvelous flavor, and we've used it in several cocktails in the past. Pretty good to drink all by itself as an after dinner liqueur. :-) Thanks for the comment.

Fabulous looking cocktail. May. have to have one this Tuesday.

Hi New Classic, you'll definitely want this. :-) Thanks for the comment.

That looks as pretty as a Mardi Gras float! Ah, we might not have parades this year; but at least we can have a great cocktail. ;)

Hi Carolyn, I'll drink to that! :-) Thanks for the comment.

Well, if you had enough of these, at least it would *feel* like Mardi Gras... lol! Seriously though, this is a beautiful cocktail. I love all the flavors and that deep amber color.

Ah, the vaccine. We are one of the lower countries in the count to vaccinate, which blows my mind! Trudeau bought from so many sources. Our friends in Arizona have already been vaccinated and will get their second does in two weeks! It’s very frustrating here.
This cocktail looks celebratory indeed. When is Mardi Gras? Will definitely participate with food this year.
Eva http://kitcheninspirations.wordpress.com/

Hi Frank, :-) The color on this is nice, isn't it? And better flavor than color! Thanks for the comment.

Hi Eva, vaccinations are pretty spotty in the US. Some states are doing a pretty good job. Ours isn't, alas. :-( But we'll get it eventually -- we've gotten good at being patient. :-) Thanks for the comment.

I agree that drink makes me want to party, never been to a Mardi Gras, hopefully when this COVID ends I would be able to do so.

Hi Raymund, Mardi Gras is always a fun time. :-) Thanks for the comment.

We have to take our celebrations how we can get them these days. This strong and flavorful drink sounds like a good way to get the non-party started.

Hi Laura, drinking one of these makes any occasion a party! :-) Thanks for the comment.

I'm a Manhattan fan, so I'd be eager to give this Creole cocktail a try!

Hi Jeff, this is really a nice drink -- think you'll like. We'll have another Manhattan variant coming in March. :-) Thanks for the comment.