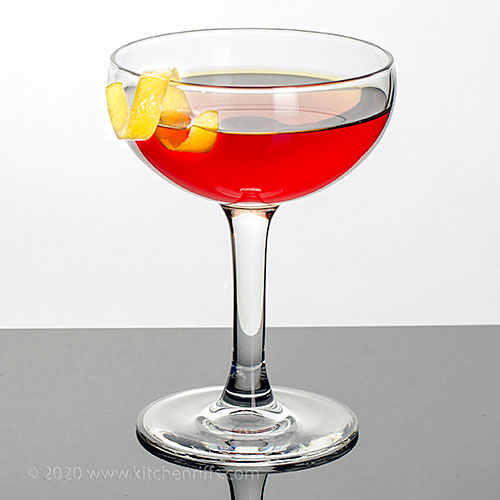 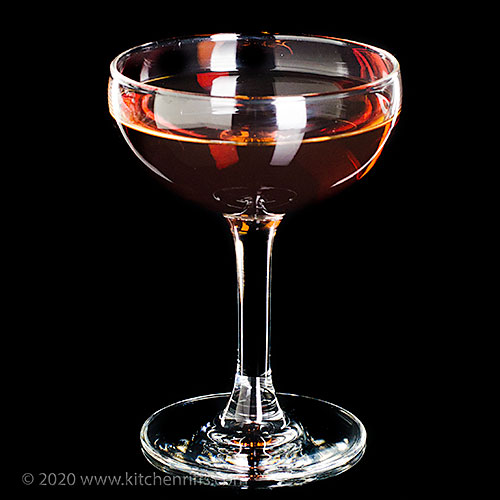 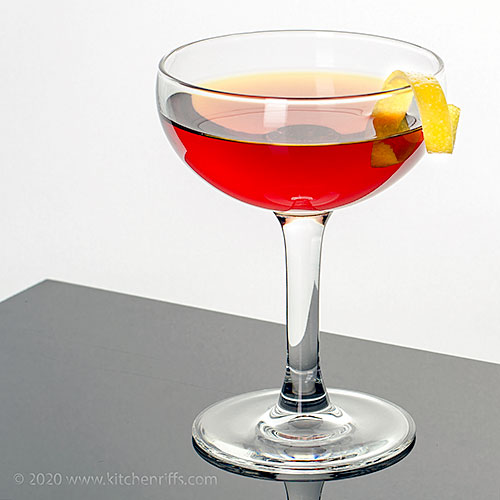 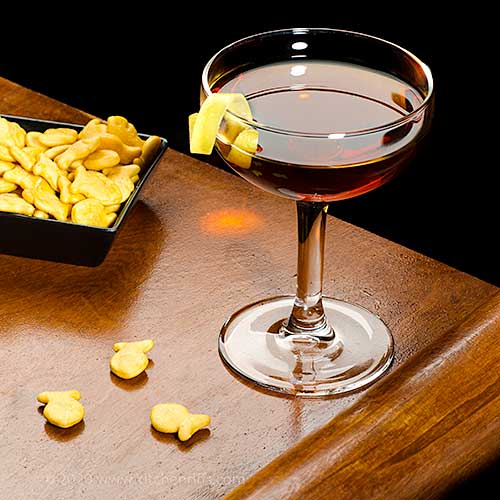 I am happy that Fall arrives :-) that means holiday season is not far any more! That's a really beautiful drink to welcome a new season, John.

Hi Angie, we love fall recipes, so it's our favorite season. :-) Thanks for the comment.

As usual I love your recipes and of course the puns. A nice cocktail for fall while sitting on the deck is a great way to celebrate fall. I still have to wait a while for it but it is the price you pay when living in the south.

Hi Anne, we lived in Texas and Florida for years, so I do know about late falls. But this drink is worth waiting for. :-) Thanks for the comment.

You know, I would love to see your "hooch" cabinet! Perhaps you have an entire wing?

The Brooklyn looks wonderful and I just forwarded to my friends in Brooklyn who are cocktail aficionados... They will love this.

I was just writing about the seasonal change -- although it's still summer (and will feel like summer) for a while, the beginning of school always says "autumn" to me... And here we are...

Those beautiful autumn colors in the Brooklyn cocktail are stunning. I think this drink might pack a punch. Maybe 2 of these and the word "fall" means more than the seasons.(smiling) Wishing you a lovely week.

We don't have any refreshing cool weather yet but that wouldn't stop me from enjoying this cocktail.

Hi David, hooch is such a great word, isn't it? We have way too much. But we keeping making new drinks, so we kinda have to. :-) Thanks for the comment.

Hi Bobbi, this drink does pack a punch. It's the sweet vermouth that really gives this such pretty color. Thanks for the comment.

Hi Karen, you can just adjust your AC until it feels like fall. :-) Thanks for the comment.

Hooch is, indeed, a great word. We always refer to our stash as the hooch cabinet, whether it is all in one place or not.

Hi David, we have our main hooch cabinet in our kitchen, and a considerable overflow in the basement. That's where we store all the stuff we don't use that often, but of course plan to use. Eventually. :-)

Oh this has all the feels of the Fall season.

We're getting a few fall like days here. Love it....and this is the perfect cocktail to celebrate!

Hi Liz, definitely a few cool days, and the quality of the light is changing so! Really noticeable in the late afternoon. Which just happens to be cocktail time. :-) Thanks for the comment.

What a lovely cocktail to welcome fall. I look forward to it. The season and the drink. :-) ~Valentina

Hi Valentina, we love fall! And this drink. :-) Thanks for the comment.

Beautiful Cocktail, as always! I love the red color, perfect for the cool season

Hi Holly, great color and flavor both. :-) Thanks for the comment.

Due to storm Laura, its rainy and windy for past couple of days here in Alabama. The brooklyn cocktail looks so beautiful, it’s the kind of thing I am, more or less, always in the mood for. ;)

I feel like this cocktail almost has to be drunk in front of a roaring fire, it sounds delicious.

This is another lovely cocktail. The days are starting to get that more autumn-like feel lately, even if I'm not quite ready for summer to end!

Hi Rahul, hope Laura didn't cause you too many problems! This would be the perfect antidote to the storm. :-) Thanks for the comment.

Hi Caroline, roaring fire would be perfect! Gotta try that. :-) Thanks for the comment.

Hi Amy, it's still just hinting at autumn here, but I know it's coming. So we're looking forward to drinking many more of these. :-) Thanks for the comment.

Hi Pam, this drink is definitely for whiskey drinkers. :-) Thanks for the comment.

The drink is looking amazing and has got the colors of the fall! Bookmarked!Thanks for sharing.

Hi Sosnia, it really has wonderful flavor. :-) Thanks for the comment.

You had me at Brooklyn, John! And this sounds wonderfully autumnal. Thanks for the deep dive bitters class—I would love to peek in your liquor cabinet sometime. Is it a walk-in?

Hi Terry, it should be a walk in! :-) Thanks for the comment.

This looks wonderful! Perfect for fall. Loved getting the drink's history as well!

Fall is coming quickly in our part of the world and your Brooklyn Cocktail would suit us just fine. But, I've just checked and can't find Picon Amer of any substitutes. As a former Manhattan drinker this one intrigues me. I shall continue my search for a proper substitute.
Great images, you know I'm falling for your photography.

Hi Ron, finding the Amer Picon substitute can be hard. We first wanted to do this drink (and some other ones that use Amer Picon), 4 or 5 years ago and at that time we couldn't find any substitute that was sold locally. These days there are two or three. Maybe make a quick trip to Denmark? I'm *guessing* the stores there might have something that would work. Thanks for the comment (and the pun).

I love this cocktail!! And your photography is beautiful!!

Hi Mary Frances, isn't it a great drink? Thanks for your comment.

This is really interesting. I love a Manhattan, and I always ask for it to have a bit of the maraschino juice dirty it up. I think this Brooklyn cocktail sounds kind of made for me.

Hi Jeff, bet you'd like it! It's a neat drink. Manhattans are one of our favorites, too. Thanks for the comment.

This reminds me of my trip to NY two years ago -- which, given these changing times, now seems like a lifetime ago. I don't know when I'll feel comfortable again boarding a plane for a trip like that. But at least I can sip on this lovely cocktail and pretend I'm in NY again.

What a lovely little cocktail. I didn't know there was such thing as Maraschino liquor. That could be dangerous. :) Why am I not surprised that you have a 1930's cocktail book.

It looks like its going to autumn there and spring here. Need to bring out those spring cocktails I saved from this site. Lovely cocktail BTW

Hi Carolyn, we're with you in being really uncertain when we'll fly again. Not until after a vaccine, for sure. But we can visit NYC virtually, by drinking this! :-) Thanks for the comment.

Hi MJ, we actually have quite a few cocktail books. :-) Thanks for the comment.

Hi Raymund, this could well be an early spring cocktail, too. One of those windy, rainy spring days. :-) Thanks for the comment.

Have you heard of a Red Hook? It's a classic cocktail made from rye, maraschino liquor and Punt e Mes (a “sweet” vermouth with a “bitter” edge). In case you didn’t know, Red Hook is a neighborhood of Brooklyn, NY. So I have to wonder how all these regional riffs on a Manhattan got started. GREG

Hi Greg, I have heard of a Red Hook -- it's one of the many "Brooklyn" drinks. No idea why all the regional riffs -- I assume every bartender who invented one wanted to cash in on the fame of the Manhattan. :-) Thanks for the comment.

John
Fall is here atleast technically with the nip in the weather. Your puns and the lady cocktail drink is awesome.Loved the click absolutely.

Hi Hasin, there's definitely a change in the quality of light here, and we're getting some cooling breezes. Time for this drink! :-) Thanks for the comment.

Beautiful cocktail. I am so ready for fall. I never make Manhattans. Why is that? Must try one for cooler weather.

i'm not much of a cocktail drinker these days (unlike my hedonistic youth) but this sounds amazing. and strong! great photos as usual:)

I have never had Amer Picon, but now I am dying to try it. I had Amaro Montenegro once and loved it. I'm often very into those bitter drinks that wake up taste buds.

Hi Sherry, it's really a fun drink -- great flavor! Thanks for the comment.

Hi Laura, it's so interesting what the right amount of "bitter" can do to wake up those taste buds! Sounds weird, but such a pleasant taste. :-) Thanks for the comment.

I have noticed the sun setting just a bit earlier, but I'm still waiting for a fresher breeze. I'm happy to sip this cocktail while I wait, though! Love the curl of lemon on the edge.

Hi Lisa, those fresh breezes are coming. And if you sip this, you won't care when. :-) Thanks for the comment.

Came by to say hi and wish you a great day.

The evenings are getting shorter and the days are cooler. Sounds like the perfect cocktail for the autumn weather.

Hi Dawn, yup, a great fall drink. :-) Thanks for the comment.