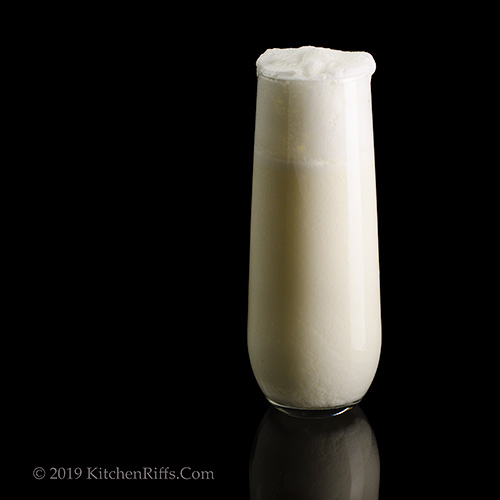 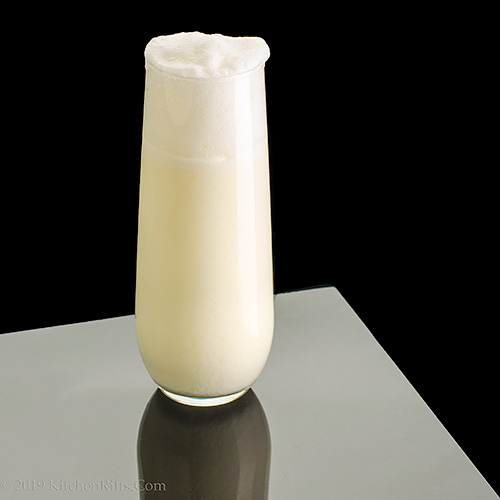 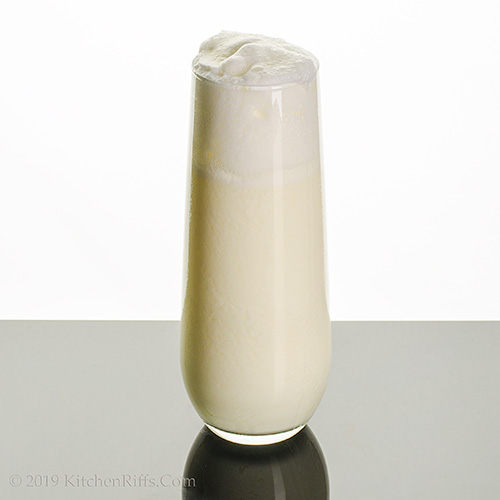 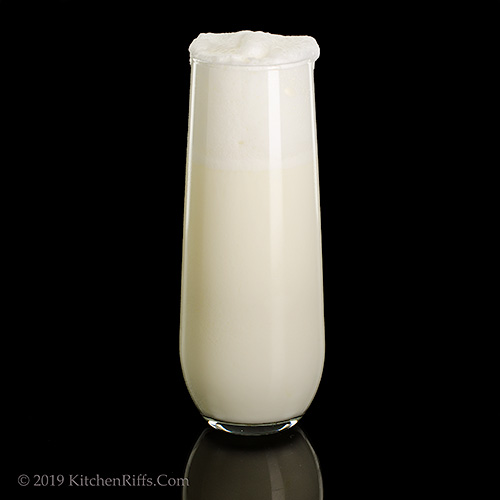 This one is new to me but it sounds fantastic! I especially like the fact that I can excuse myself if I decide to have it for breakfast, thanks for that.:)

John, you are a master of cocktails. I love the froth on top. Never thought of egg white can be used in cocktails and I see it here. This looks refreshingly cool for hot summer days

Hi Barb, this drink is a great way to get your breakfast eggs. :-) Thanks for the comment.

Hi Holly, egg white is a fun ingredient! Looks great, and adds some nice mouth feel. Thanks for the comment.

What a fascinating and beautiful cocktail! Egg white and cream with gin...something totally unexpected, but fun and yummy!

Hi Angie, this really is an exceptional cocktail. Worth trying. :-) Thanks for the comment.

I want a row of shaker boys at home too! I have been to Nawlins twie and never heard of a Ramos Gin Fizz. And you explain why but it sounds so good! Thank god for blenders now.

Hi Evelyne, people have actually developed machines to mechanically shake a cocktail shaker -- just to make this drink. Kinda price for home use though. :-) Thanks for the comment.

It looks and sounds SO DELICIOUS!!!

Ah with a slight change using powdered swerve this could be a delightful keto compliant drink. Plus I am one of those odd people who always has orange blossom water on hand. You never know when a cookie, cake or now a drink might need it. Thanks for sharing.

Ummmm, I love gin, New Orleans and this drink! Interesting with fizzes, garnishes, and glass sizes for cocktails. You covered it all perfectly! Thanks, John!

It's like a summer version of an eggnog but lighter and brighter. Love this.

Hi Anne, glad you can make this keto compliant! We almost always have orange blossom water on hand, too. :-) Thanks for the comment.

Hi Pam, lots to discover about various drinks, isn't there? Makes one thirsty. :-) Thanks for the comment.

Hi Bobbi, that's a great way to describe this drink! :-) Thanks for the comment.

This sounds amazing and I especially like the blender method. That's more my style :)

Hi Pat and Dahn, it's a wonderful drink! :-) Thanks for the comment.

This sounds delicious. I've heard the drink's name before, but I guess I had no idea what it is. I'd love to try one. Sounds pretty do-able.

Hi Jeff, pretty easy to make. And totally drinkable. :-) Thanks for the comment.

Wow,looks so stylish and pretty ☺

oh wow KR this looks fabulous! what a drink. and once again i love your photos. cheers and knees up mother brown as the old saying goes:-) - sherry

I think you are a great bartender, I love reading about the different drinks. Prost!

Hi Natalia, and really, really good. :-) Thanks for the comment.

Hi Sherry, LOL -- I haven't heard that saying (or thought of that song) in years. :-) Thanks for the comment.

This is the perfect patio sipping drink! Definitely bookmarking this.

Hi Balvinder, this is a nice patio drink! Good idea. :-) Thanks for the comment.

Wow, this one just looks delicious, John! Seems like a little bit of work, but I'm sure it's worth every sip! :)

I've never had one of these. Must try it. And since you've taught us the "reverse dry shake" method, I can do this. Otherwise, I'd be out of luck because shaker boys are pretty scarce on the ground around here!

At first glance this looks like a dessert! I really like the sound of the ingredients, and it's totally new to me. Your notes are so helpful for trying it at home. Looks like fun! ~Valentina

Hi Marcelle, this definitely more worth than most cocktails. Really worth it, though. :-) Thanks for the comment.

Hi Valentina, it does look like a dessert, but definitely not. Now, a Brandy (or Gin) Alexander -- THAT could be dessert! :-) Thanks for the comment.

Doesn't everyone need a dozen shaker boys behind the bar? :) What a great story. I've never had a Ramos gin fizz, but it is definitely one of those drinks that I would love to try at least once. It looks rich for very tasty. Thanks John!

This sounds like such a fun drink! I've never heard of the reverse dry shake before so I appreciate the education. Very interesting!

Hi MJ, cocktail history is fun! As is this drink. :-) Thanks for the comment.

Probably Mark’s favorite fancy cocktail! We tried them once at home and they were a dismal failure. I will use your recipe (and am grateful for the “reverse” dry shake) report back.

Hi David, hope you and Mark like the "reverse dry shake" method -- it's fun, and works. :-) Thanks for the comment.

Sure is a pretty drink! I would have loved the theater of the original making of the drink.

Hi Laura, I'd have loved to see these made back in the day, too. :-) Thanks for the comment.

I think I had a version of this drink with some friends in a Miami hotel room. It wasn't nearly as pretty and I have a feeling it wasn't shaken long enough! We need to know about your reverse dry shake technique :)

Hi Liz, although this drink doesn't need to be shaken for the legendary 12 minutes, it DOES require a much longer than normal shake in order to develop the ideal texture and frothiness. It's a wonderful drink -- you should try making it again. And that reverse dry shake really works! :-) Thanks for the comment.

Now that definitely looks like a tall drink of deliciousness. But anything with heavy cream in it has got to be extra good! ;)

That's a killer cocktail for sure! I suck at making cocktails and saving this recipe to try soon.

Hi Carolyn, cream is so good in drink! :-) Thanks for the comment.

Hi Kankana, this is definitely a drink worth making. SO good. :-) Thanks for the comment.

That looks stunning! And I always enjoy reading the history behind the drinks you share here although I am a teetotaler ��

Hi Taruna, we got interested in cocktails because of some of the great stories behind them. :-) Thanks for the comment.

Oh JOhn, another cocktail with gin? Egg white and cream...it is a dessert...thanks for this awesome recipe. Have a wonderful week!

Hi Juliana, more breakfast smoothie than dessert. :-) Thanks for the comment.

It's 106 outside, and I need one of these in my hands right now! What a great adult milk shake. And, I love the simplified dry shake technique.

Hi Lisa, yes, you DO need one of these. :-) This is really very refreshing. Thanks for the comment.

You are the master of fancy cocktails, this is another winner!

Hi Emma, isn't this a great drink? Looks and tastes wonderful! :-) Thanks for the comment.

So, we had a "Kitchen Riffs" Labor Day weekend, dotted by the Honolulu Cocktail, and them some of these fizzes. This one was very interesting and refreshing. I kind of wished it were sweeter, but I found that when I sweetened it, it completely lost all of its nuance. In the end, it's best exactly the way you laid it out.

Oh, and by the way, I should've added that the shaking was crazy (in a fun way). I don't make ice. I buy it, because I think it tastes better than what my freezer makes. Plus, the ice I buy comes in chips. I found that if I used a small handful of chips, they wound up dissolving into the drink after 60 seconds, and didn't have to be strained. The texture of this drink if FABULOUS.

Isn't this a wonderful drink?!! Glad you enjoyed it. Using chips would be great -- it's ideal if the ice melts and you don't have to strain it out. Thanks for letting me know that you liked this. :-)