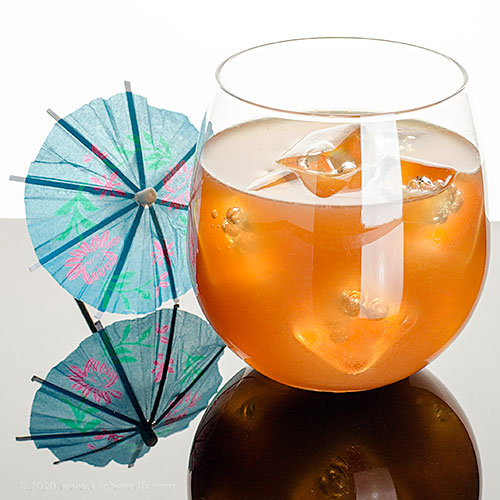 The days are long and hot in this part of the world right now. So you need a refreshing cocktail, no?

Preferably a slow slipper with lots of fruit juice and a healthy jolt of rum.

So may we introduce you to our friend, Mr. Bali Hai? We think you’ll get along. 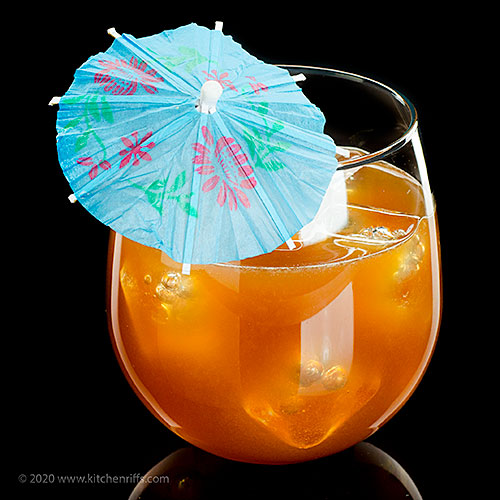 The 1950s marked the high point for Tiki-themed restaurants in the US. You might say it was peak Polynesian.

It was during this time that the Bali Hai restaurant, located on Shelter Island in San Diego, was founded. Someone at the restaurant created the Mr. Bali Hai Cocktail as its house drink.

As is the case with many Tiki cocktails, the recipe for the Mr. Bali Hai has changed over the years. We like Jeff Berry’s recipe, which can be found in his book Beachbum Berry Remixed. His recipe recreates the drink as it was made at the restaurant in the 1970s. More history in the Notes. 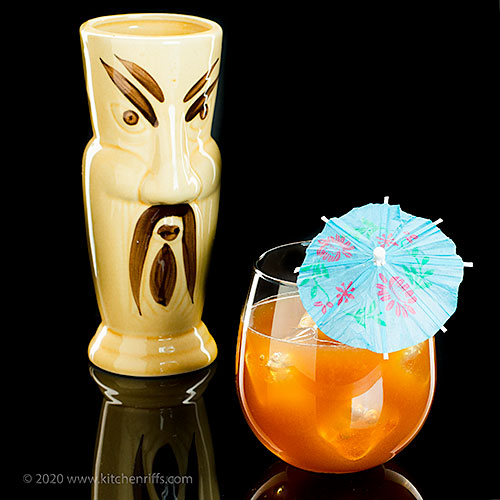 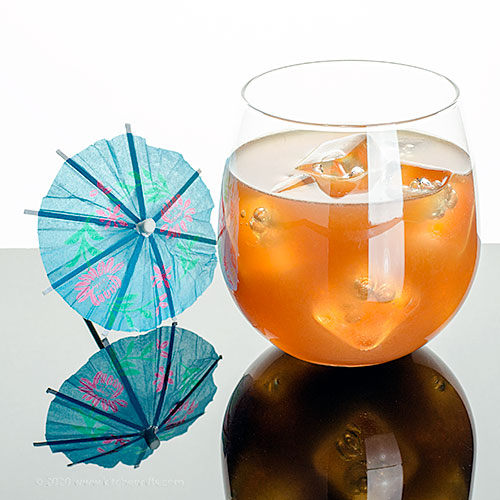 “Wax down the surfboards,” said Mrs. Kitchen Riffs. “This drink makes me want to hit the beach.”

“Reminds me of visiting Tahiti,” I said. “Those were the days.”

“Yeah, we won’t be jetting off to the South Pacific again any time soon,” said Mrs K R. “So we’ll just have to conjure it up at home.”

Guess I better be careful. There could be trouble in paradise.

Such an interesting cocktail, love the history. Not sure if the same zest for Polynesia was the same here but I do recall my aunt and uncle had some Polynesian art displayed at their home.
It’s so darn sad that the numbers in the US are exploding, we had hoped to travel to see our friends in Arizona but as things look, that won’t happen anytime soon.
Eva http://kitcheninspirations.wordpress.com/

I hope I am not the only person who started singing Bali Hai the minute they saw this post title. I have to run to the store in a minute. I guess I will be adding pineapple juice to the shopping list!

This is a new drink for me. Rum and pineapple sound really wonderful together...an awesome summer drink!

Hi Eva, the covid-19 numbers are SO depressing, aren't they? And we seem to be going backwards, not forwards, alas. Anyway, thanks for the comment!

Hi Anne, lol, the first time I saw this drink, that song popped into my head, too. :-) Thanks for the comment.

Hi Angie, rum and pineapple is a wonderful combo! And this is a wonderful slow sipper of a drink -- perfect for hot weather. :-) Thanks for the comment.

So summery and pretty...I bet it tastes SO GOOD!

Perfect timing for this, John, as tiki bars are riding a new wave of popularity. Also, sounds delicious!

Hi Pam, its flavor is quite enjoyable and refreshing. :-) Thanks for the comment.

Hi Terry, Tiki stuff is fun! And we really like Tiki drinks in the summer -- most are really refreshing with all their fruit juice. Thanks for the comment.

I notice that you didn't mention having any similar experiences when you actually traveled to Polynesia (didn't you?) Reality and fiction at odds again!

Hi Mae, we were too busy drinking Tiki drinks. :-) Thanks for the comment.

This does sound like a very refreshing beverage for a hot summer's day! So lovely as well.

Hi MJ, it's really delightfully refreshing. Pretty darn tasty, too. :-) Thanks for the comment.

Ok, I live in San Diego and I have been to the Bali Hai. I don't remember this drink! I shall try it at home and then maybe enjoy it at the hotel, too! Love rum cocktails!

Hi Laura, I haven't been there, but I looked at the menu online -- they have loads of drinks! I think their Mai Tai might be their best selling cocktail (makes sense -- it's probably the best known Tiki drink). Thanks for the comment.

Can't go wrong with pineapple and rum and an umbrella! I fell like I'm on vacation ;)

Hi Dahn and Pat, the umbrella always make me feel like I'm on vacation. :-) Thanks for the comment.

John, this drink sounds sweet and refreshing. As always, I enjoyed reading the history behind the cocktail. The term Tiki bar makes me think of old Elvis movies :) I looked up the Mr. Bali Hai mug you mentioned, and that made me think of that old Brady Bunch episode where they went to Hawaii and found that creepy, cursed Tiki statue. I'll take mine in a rocks glass instead LOL Really fun post, John!! <3

That's quite the jolt of booze! :) We all need to imagine paradise and bali-ve!

Hi Natalia, definitely a great summer drink. :-) Thanks for the comment.

Hi Marcelle, thee are a LOT of different Tiki mugs! The Mr. Bali Hai mug is one of the more interesting ones. But we're beyond the mug stage and just prefer regular glassware most of the time these days. :-) Thanks for the comment.

Hi Debra, yup, lotta booze in this one. Definitely a drink you want to take your time consuming. Thanks for the comment.

The flavors in this sound crazy and like they might not blend, but that's what Tiki drinks do right? They take things to create a vibe that is out of the ordinary.

Hi Laura, crazy flavors indeed. But they do work. :-) Thanks for the comment.

John, beautiful photos, as always. Love the story and the puns. The Kahlua or coffee brandy is a real surprise ingredient to me. Would never have expected it in a fruity Tiki cocktail!

Hi Jean, the coffee IS unusual. Works, though, which is the important thing. :-) Thanks for the comment.

Looks delicious and the photo is stunning!

Hi Balvinder, it's a terrific drink. :-) Thanks for the comment.

Used to visit this Tiki bar in Hong Kong of all places and they served something very similar in this cool Mug. Thanks so much for the recipe as now we can enjoy this at home.

Hi Bobbi, we haven't been to Hong Kong, but they're supposed to have some fabulous bars. Although, yeah, a Tiki bar is a bit of a surprise. :-) Thanks for the comment.

this does sound like a very interesting mix of flavours KR! coffee and pineapple? Mm - ah well any alcohol is good alcohol i reckon:-) great photos!

Oh Bobbi - I do remember also . . . served a bit differently and could be absolutely lethal ! Rum and sweet fruit juice is probably the only combo to get me into trouble more than once . . .

Hi Eha, most Tiki drinks have a lot of fruit juice and a lot of rum, so if you want trouble, drink Tiki! :-) Thanks for the comment.

Hi Sherry, I know, an odd set of ingredients. But they taste good once mixed together. :-) Thanks for the comment.

Thanks for ending with that info on Bali Ha'i. The whole time I was reading your post, that song was going through my brain, and I was thinking that I'd have to look it up afterward, because I couldn't remember what it was from.

Hi Jeff, that's a fun song. And this is a fun cocktail. :-) Thanks for the comment.

Hi Hasin, really nice and refreshing for summer. :-) Thanks for the comment.

A great cocktail John and a restaurant we've visited more than once. What a great view of San Diego you have from there.
I love your mug. What was the signature Polynesian cocktail they served in a mug at the old Trader Vics?

I do enjoy s tropical drink (with an umbrella) from time to time — they are so easy and enjoyable! Thanks, John!

Hi Ron, I think that mug does duplicate a Trader Vics one. We have a bunch of Tiki mugs -- quite a few years ago we were on a real Tiki craze, and even have a Scorpion bowl -- but these days we just use regular glasses for these drinks. Just easier. :-) Thanks for the ocmment.

Hi David, those little umbrellas are SO cliché but kinda cute. :-) Thanks for the comment.

You're probably getting the same heat wave that we are, so the timing of this tropical cocktail is perfect!! This would be excellent for backyard sipping once the sun goes down!

Hi Liz, yup, it's beastly hot here. This is a great drink for beating the heat! :-) Thanks for the comment.

I have a soft spot for any drink that comes with a tiny umbrella. And heck, we can all use more fun these days, right? I'll definitely drink to that! ;)

Hi Carolyn, we'll always drink to fun! :-) Thanks for the comment.

First of all...beautiful pictures John...they are so inviting, and I love the ingredients in it...very tropical.
Have a great week ahead!

Hi Juliana, it's a good drink. :-) Thanks for the comment.

Oh my this does sound tasty! It's perfect to indulge in during the hot summer days. Let's face it with not too many places to venture out, we can enjoy a glass or two, or three, without having to go anywhere!

Hi Vicki, we haven't been out to eat for months and months! Don't think it'll be happening for the rest of the year, alas. :-( Thanks goodness for delivery! :-) Thanks for the comment.

This cocktail is so pretty with that umbrella. :-) And sounds super tasty, too! ~Valentina

Hi Valentina, it's really, really tasty. :-) Thanks for the comment.

This sounds like my kind of cocktail. I like the fruity ones. Nice and refreshing for the hot summer days.

Hi Dawn, this is really refreshing. And tasty. :-) Thanks for the comment.

John, this is a great summer drink. Especially in these times. It gives me something to look forward to on Friday. Can't wait to give your recipe a try. Eha, absolutely, these go down really easy. stay way and take care

Bobbi, Friday can never come soon enough, can it? :-)

There are many beaches named like such, in fact in the Philippines I had been into two Bali Hai resorts. Now thats where the name came from.

Hi Raymund, next time you're at a Bali Hai resort, you'll have to drink a Mr. Bali Hai cocktail. :-) Thanks for the comment.

Wow, I didn't know they still sold cocktail umbrellas, lol! I'm curious now to find out how they got started, must have been part of the tiki phenomenon, I assume. Any ideas?

Hi Frank, pretty sure that Donn Beach (of Don the Beachcomber fame) made the umbrellas popular as a garnish. But I think Harry Yee, a bartender in Hawaii, may have been the first to use them. Somewhere on the blog we discuss the history -- I think! I need to go look -- I don't remember which post that was, but it was years ago. Anyway, they're a fun garnish. (Note: OK, just searched the blog and the only real discussion I see is for our Mai Tai post: http://www.kitchenriffs.com/2011/07/mai-tai-cocktail.html -- which has some history. Thought we did a more detailed history at some point, but maybe that got cut from a post because it was getting too long. As our posts tend to do. :-) Thanks for the comment.