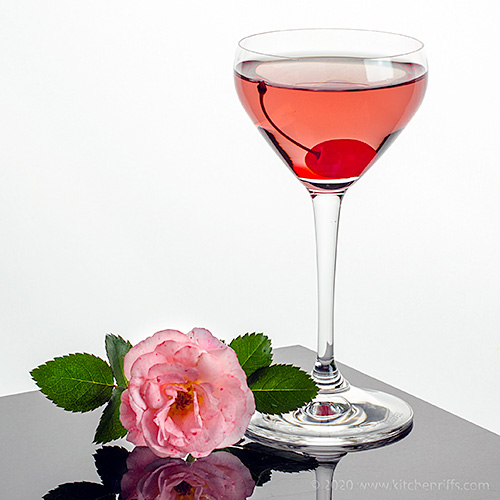 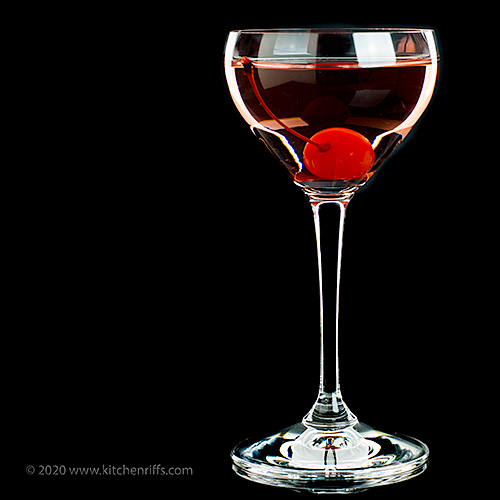 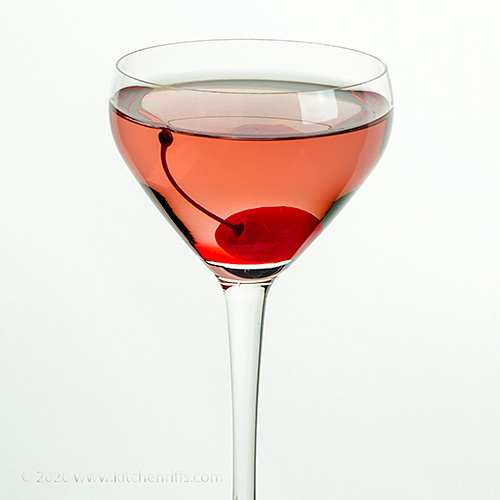 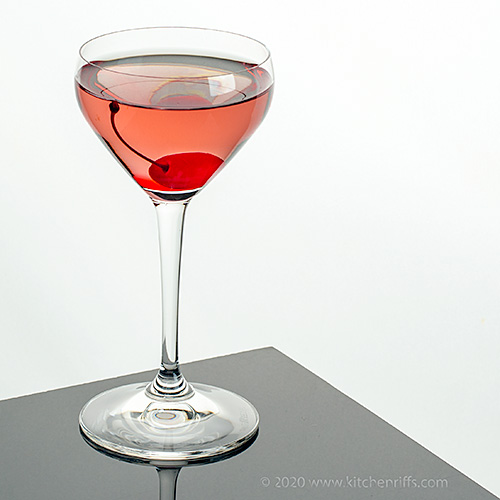 I'm glad the alcohol content in this cocktail is low since I would be tempted to have two of these. I have a bottle of rose water on hand- maybe I could add a drop of this, too? I'm glad it's warming up and look forward to your increased number of cocktails coming up!

Hi Fran, really interesting idea with the rose water! I'd give that a try (just a drop, though) -- it'd add another dimension. Thanks for the comment.

Amazing clicks and delicious cocktail..this is really lovely that I want to have a sip too!

This one is really tempting, but I don’t have any of the ingredients at all!

Hi Mae, we always have kirschwasser around (we love the stuff), but I can see how most people wouldn't (most people aren't as crazed about cocktails as we are). Once we can go out to restaurants again -- might be some time, alas -- this would be a good drink to order. :-) Thanks for the comment.

This looks a real refreshing post. The sweet smell of rose itself is enough to soothe and calm me and your cocktail is definitely a visual treat. What a lovely click!

The color of this cocktail is simply superb John. weekend sorted :)

Love Kirsch and dry vermouth, so this is a winner! Have the ingredients and definitely want to try it, love the color and the cherry makes it perfect. Thanks!

Hi Priya, the color is terrific. As is its flavor. :-) Thanks for the comment.

Hi Pam, cherries look so nice in drinks, don't they? :-) Thanks for the comment.

I have to get some dry Vermouth because I only have the other kind. This drink has my name written all over it. Prost! I love your humerus dialogue.

So they call it a rose cocktail even though it's all cherry based?! It certainly is pretty as a rose!

Hi Gerlinde, we always have dry vermouth in our refrigerator as a substitute for white when when we need a little for cooking. Well, and drinks, of course! Thanks for the comment.

Hi Laura, who knows how they name cocktails! I'd guess it's named for the color. And yeah, it's pretty! Thanks for the comment.

Hi Balvinder, it really is nice. :-) Thanks for the comment.

How pretty and delightful this is a very pleasant cocktail. Indeed, why stop at just one!

Hi Merryn, our question exactly! :-) Thanks for the comment.

hi KR
how gorgeous does this look! you know, i don't think i've ever had vermouth. i'm one of those odd people who likes flowery scents and tastes in their food, so this would go down well with me! hope all is well in KR land:-)

oops! i've just noticed this drink doesn't actually have any rose flavouring. maybe i was thinking of that comment above re rosewater...

Hi Sherry, this is such a fragrant drink -- its aroma is almost as good as its flavor. Almost. :-) Thanks for the comment.

How pretty this looks! Perfect for a porch get together during these social distancing times since this looks like it is easy to mix and serve!!

Hi Sherry, no rose in it, but incredibly fragrant. More herbal than flowery, but still a delightful aroma. :-)

Hi Ansh, really easy to mix. Easier to drink. :-) Thanks for the comment.

How pretty! The cocktail glass is spotless clean. I bet the cocktail has very good fragrance too.

Hi Holly, great aroma and flavor. :-) Thanks for the comment.

well I am ready for some summer sippin' and I think I will start with this ;)

Hi Dahn, summer sippin' is the best! :-) Thanks for the comment.

We have been having driveway get togethers with a couple fo our neighbors during Covid. Everyone bring their drink and chair and we sit appropriately far apart and enjoy an adult beverage before we all go in to cook (Is this going to be our forever new normal?)
The rose cocktail sounds like a wonderful drink to have.

Oh, you have no idea... we have tickets and apartments booked for three weeks in Paris in October... not looking good. So this cocktail will have to do... just need the raspberry syrup (or Chambord). Hope you two are well.

Hi Anne, we've been having those, too. Or visiting friends, and sitting far apart on patios, driveways. Hope it's not the new normal, but looks like it may be for awhile. We miss dinner parties! :-( Thanks for the comment.

Hi David, oh bummer re Paris! I agree -- it doesn't look good. At least not for this October. :-( But one of these will definitely do! Well, kinda. Thanks for the comment.

It sounds yummy and looks beautiful!

These are lovely shots of a beautiful drink!

Life's a bit rosier with this! Such pretty pink pics! Hope all is well.

Hi Amy, aw, thanks for that very kind comment. :-)

Hi Abbe, this drink will put you in the pink! Or something like that. :-) Thanks for the comment.

Gorgeous. And "light." Sounds like the perfect drink while sheltering in place. And I always love your photos!

Hi Jean, this is a delightful drink -- really worth a try. :-) Thanh for the comment.

The color is stunning....and since I have no desire to board a trans-Atlantic flight, I'll happily sip on this beautiful cocktail and dream of future holidays.

Hi Liz, the color is neat, isn't it? Although we're greatly looking forward to travel again, we know it's going to take time. Good thing we have this to sip on! :-) Thanks for the comment.

An incredible image in the beginning, but the one with the black background is perfect, one of your best.
Your rose cocktail looks to be a great summer drink. The color is amazing.

Yeah. We have a trip planned in November that we're almost positive we'll end up canceling. Haven't done it yet so we can still live in fantasy land, hoping it might happen. :-)

Hi Torviewtoronto, isn't that nice? Love pink cocktails! Thanks for the comment.

Hi Ron, thanks you so much for such a kind comment!

Paris is on my bucket list! I want to go someday! Love this beautiful cocktail! Perfect on a hot summer day.

Hi Ashley, Paris is wonderful. You'll love it! Thanks for the comment.

Love all the cocktail including this one you've been sharing. Sometime I wonder how big your bar area at home is :). In any case, I'd love take a sip of this while I watch the traffic in my balcony here in NYC. Thanks for sharing.

Hi Yi, we have a LOT of bottles of stuff that we rarely use -- we store those in the basement. :-) Thanks for the comment.

Hi Denise, gosh, thanks for that very kind comment!

Welcome back, summer sippin'! I think I have everything I need to make this if I use the Chambord.

Hi Jeff, we LOVE the summer sippin' series. We always find amazing new drinks when we do it -- like this one. :-) Thanks for the comment.

Very pretty! And sounds really refreshing for a summer evening on the porch. With one of those brandied cherries... like you say, their flavor can't be beat.

Hi Frank, brandied cherries are awesome! SUCH good flavor! And really nice in this drink. :-) Thanks for the comment.

What a lovely simple cocktail. Vermouth is about all I can handle nowadays in alcohol, so I look forward to giving this a try. Thanks John!

I can picture Audrey Hepburn sipping this. So lady-like, pretty, and full of charm -- that's her and this drink, too.

Hi MJ, we like dry vermouth on the rocks for a predinner cocktail. And this drink, of course. :-) Thanks for the comment.

Hi Carolyn, definitely an Audrey Hepburn cocktail! Thanks for the comment.

The Rose cocktail is going to be the perfect refreshing drink this summer on the deck. We can pretend we are overlooking on to the Louvre, while we enjoy this chilled little pretty in pink cocktail. Stay well and take care

Hi Bobbi, perfect deck drink. :-) Thanks for the comment.

When I read the title I thought it contained some sort of rose...rose color...looks so delicate and like the idea of low alcohol content...thanks for this super pretty cocktail recipe.
Have a wonderful week ahead John!

At first I thought the recipe would contain Rosé because of how it looked, I bet my girls would love this

Hi Juliana, just rose color, not flavor, in this one. :-) Thanks for the comment.

Hi Raymund, Rosé n a cocktail is an interesting idea -- have to see if I can find one that contains it. :-) Thanks for the comment.

Love this! I just wrote about conjuring up the spirit of France at home too. I'd love to do the conjuring with this cocktail in hand.

Hi Amalia, this one is both really pretty and really tasty -- perfect combo. :-) Thanks for the comment.

Hi Lisa, most things are better with a cocktail in hand! :-) Thanks for the comment.

This is certainly a pretty cocktail! Great flavor combination too - a little sweet and a little tart.

Hi Laura, yup, a little of both. :-) Thanks for the comment.