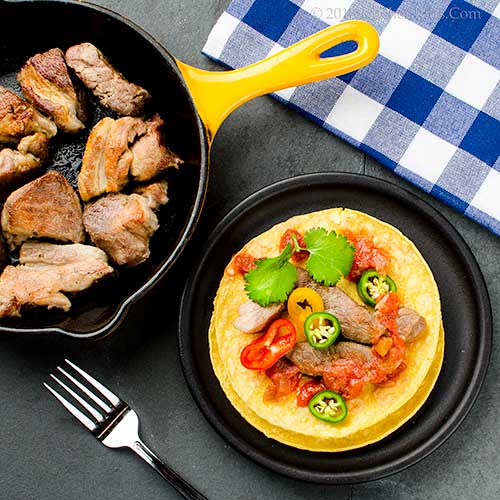 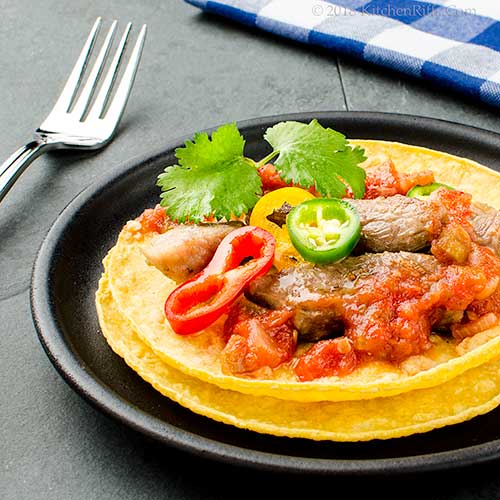 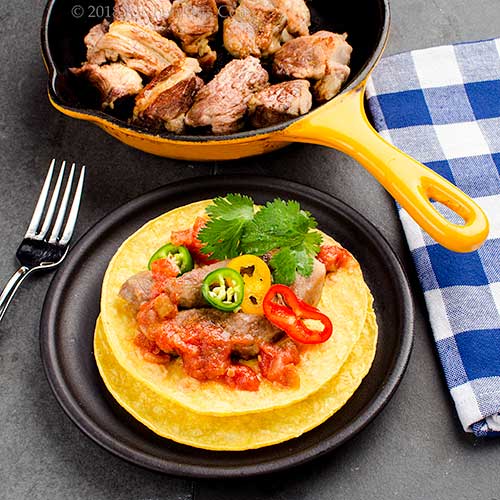 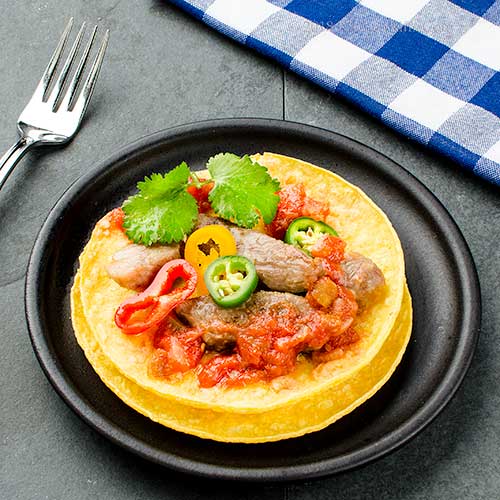 Wouldn't it be nice to need 18 pounds of pork and gallons and gallons of lard! A real party. I love to imagine the quantities of peppers, salsa, etc. for that one.

Thanks for scaling it down to family size.

Hi Mae, I'm really tempted to try that whole-shoulder recipe! Gotta wait until we give a huge party, though -- otherwise we'd be eating leftovers for eons. :-) Thanks for the comment.

My husband is a carnitas fan and always orders them in a restaurant. I will make him this healthier version. Thanks for the recipe John.

Hi Gerlinde, your husband will love these! You will too. :-) Thanks for the comment.

I love carnitas! only made it once though and with a crock pot. Will have to try your way, it looks so good. I actually saw the real deal on a youtube video recently of street food in Mexico City.

Hi Evelyne, the slow cooker method is good -- we've made carnitas that way, too. But the texture is more like pulled pork -- I like a chunkier texture. But the flavor in both methods is excellent! Thanks for the comment.

I knew I shouldn't have looked at your blog so close to lunchtime, John. This looks delicious—and so easy to make.

I use the same recipe you do and tend to make about 10 pounds of the stuff in the slow cooker. We have enough for one meal them freeze the remaining in meal sized freezer bags. When I get down to one bag in the freezer it is time to make another batch.

Hi Anne, good idea to make this in quantity and freeze it! That way you can always satisfy that craving for Mexican. :-) Thanks for the comment.

I love carnitas and this recipe looks delicious.

These Pork Carnitas look so delicious!

There are so many carnitas recipes! Your version is so inviting! Where we live Cinco de Mayo is celebrated in a huge way. A great recipe for the celebration!

Hi Deb, there are a lot of different recipes, aren't there? I think this is our favorite, although any recipe is better than none. :-) Thanks for the comment.

I'll start by saying thank you for a recipe that doesn't include four gallons of lard :). And I'll finish by saying that these look SO GOOD!

In my Mexican-food excessive life, I've never made carnitas. And even though I'm not opposed to using lard, I'll take your version over Rick's. :)

One of my favorite things to order at a good Mexican restaurant! Love your version of the Rick Bayless original!

Mmmm ... I wish I was having carnitas for dinner!

Hi Lea Ann, you have to make your own carnitas! Really. Good. Stuff. :-) Thanks for the comment.

Hi Mimi, carnitas are one of my favorites at Mexican restaurants, too.:-) Thanks for the comment.

Hi Laura, I wish that most nights. :-) Thanks for the comment.

Nothing like good carnitas. I usually shred the chunks but Manservant loves them the way they are! Perfect for tacos or over rice. Now you have me thinking I better god find some pork!

This is a lovely dish, it doesn't have to be authentic to be delicious!! I am ready for some carnitas

Hi Abbe, I go back and forth on whether I prefer chunky or shredded carnitas. Both are really good, but at the moment the chunky ones get the nod. :-) Thanks for the comment.

Hi Dahn, you NEED some carnitas! :-) Thanks for the comment.

Oh how I love carnitas!! I usually don't make it because my favorite New Mexican restaurant makes wonderful carnitas the traditional way in lard and it's crispy and oh so delicious. But because it's, like you said, a confit in lard, it's not something I eat a lot of. :) Love your method of reducing the fat by cooking first, then cooking it until crisp. I would definitely select bacon drippings. Great recipe John!

OMG the thought of Rick Bayless's recipe just made me a tad nauseated LOL!!!

I don't think I have ever had carnitas...looks so darn delicious on the corn tortilla.

A very inviting recipe! Love the use of orange!!

I always order the carnitas when I'm at a Mexican restaurant. This looks like it could be my new favorite version of them!

Hi MJ, carnitas made the real deal way are sublime. These are merely excellent. :-) This is one of those dishes I usually order in restaurants, too, but sometimes you just gotta make your own. Thanks for the comment.

Hi GiGi, someday I'll make that Rick Bayless recipe -- sounds like fun! In the meantime, I'll enjoy these. :-) Thanks for the comment.

Hi Angie, carnitas are definitely worth seeking out one of these days -- so good! Or, you could just make this recipe. :-) Thanks for the comment.

Hi Ansh, the orange gives it some nice, subtle flavor. :-) Thanks for the comment.

Hi Ashley, had to pass up carnitas when you see them on a menu, isn't it? :-) Thanks for the comment.

Had no idea that authentic carnitas were so labor intensive and had so much lard... oh my word. Love your abbreviated and delicious recipe, perfect for any day needing a little spice and deliciousness.

I love carnitas and have driven to Mexico more than once just to get the good stuff. I love this version, but I have to admit you've inspired me to try cooking a lard version. I think lard is magical! GREG

Hi Bobbi, "real" carnitas do take some effort to prepare -- but they're SO good. But then, these are, too. :-) Thanks for the comment.

Hi Greg, lard IS magic! I haven't made "authentic" carnitas, but I really should -- love 'em. Although these are excellent, too. Thanks for the comment.

John, this looks soooo good! I love good carnitas, and I'm in a pork mood this week, so this might hit the menu soon.

Hi Jean, aren't carnitas good? We always seem to be in a pork mood! :-) Thanks for the comment.

Oh, my! You know this dish would be perfect for Fiesta, which started yesterday here in San Antonio, TX. Would love to eat mine with warm tortillas.

Hi Denise, this would be perfect for San Antonio's Fiesta! That's such a fun celebration. Or so I hear -- been to San Antonio many times, but never to Fiesta. :-( Thanks for the comment.

This looks absolutely delicious, I have heard a lot about carnitas... Thanks for sharing the information and the recipe.

Hi Amira, carnitas are wonderful! If you haven't had them, you definitely should try them sometime. Really good stuff. :-) Thanks for the comment.

I've still got masa to use up from my last taco night, so thanks for the recipe!

well i don't eat pork but apart from that, these look tasty. perhaps i could use chicken in them?

Nice! Nothing like carnitas in a taco. I love the original but I do like this lighter take as well. Will give it a try. And I agree about modern pork—the lean stuff they sell these days has so much less flavor than the pork I ate as a kid!

Hi Sherry, I haven't tried these with chicken, but big chunks of chicken thighs should work. You'll have to add fat at the end to brown them, of course, since chicken doesn't have that much fat. Thanks for the ocmment.

Hi Frank, modern pork really isn't that good, is it? Although I can get some good stuff at a few butcher shops. Just not at the supermarket. :-( Thanks for the comment.

Oinky-oink-oink...bring on the lard. (No, not really!) I do a version in the slowcooker which is more pulled pork with spices than true carnitas. Will splurge on the lardy authentic portions when dining out, though. :)

Hi Debra, we do a pulled-pork type of dish too -- loaded with spices. Both are nice! Thanks for the comment.

Love carnitas-did not realize it meant "little meats" This is lovely. Using pork meat in a taco with the fixings is fabulous. Love doing dishes like this one.

I often try to erase it from my mind, but it truly is the lard that makes carnitas so sumptuous. Wrapped in warm corn tortillas with some spicy salsa, they are such a treat.

Hi Velva, I think carnitas makes one of the best tacos going. :-) Thanks for the comment.

Hi Carolyn, lard is pretty tasty, isn't it? And carnitas in corn tortillas are one of my favorite meals. :-) Thanks for the comment.

This looks like a perfect dinner to me, John!! These flavors are right up my alley. :)

Hi Marcelle, this is really good stuff, isn't it? :-) Thanks for the comment.

This is my kind of recipe John - it looks and sounds perfect in my book. Great flavors!

Hi Tricia, it IS perfect! :D Thanks for the comment.

I love Mexican food and this would be the perfect dish to persuade my fella to eat more Mexican.

Hi Emma, Mexican food is wonderful! One of our favorite cuisines. :-) Thanks for the comment.