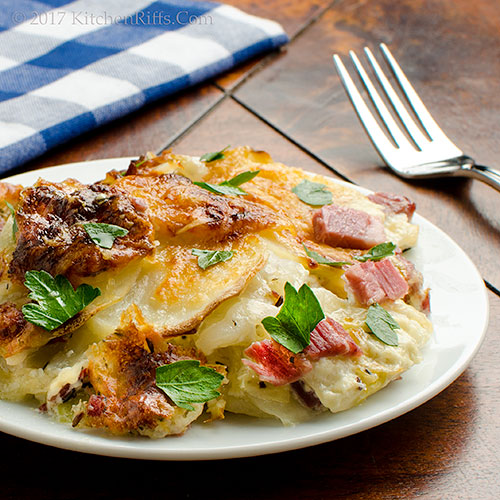 Ready for St. Pat’s Day? Craving some corned beef and cabbage, but don’t have the time to make it? We’ve got the solution.

This dish combines the three most popular elements of a traditional St. Patrick’s Day dinner – corned beef, cabbage, and potatoes – into one scrumptious dish. And you can use deli corned beef rather than cooking your own – a real time saver.

So you’ll have more time to celebrate. You lucky leprechaun, you. 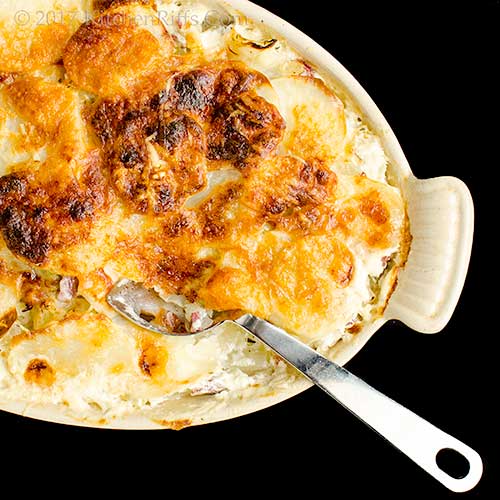 For this recipe, you’ll need cooked corned beef. You could buy it from the deli or cook your own (see our recipe for Corned Beef). If you go the latter route, we suggest making it the day before (remember to remove most of the fat cap before measuring out the amount you need for this recipe – see Notes.)

Prep time for this dish is about 20 minutes. Cooking time adds another hour or so.

This dish yields 6 to 8 main-course servings. Leftovers keep well for about 3 days if refrigerated in an airtight container. 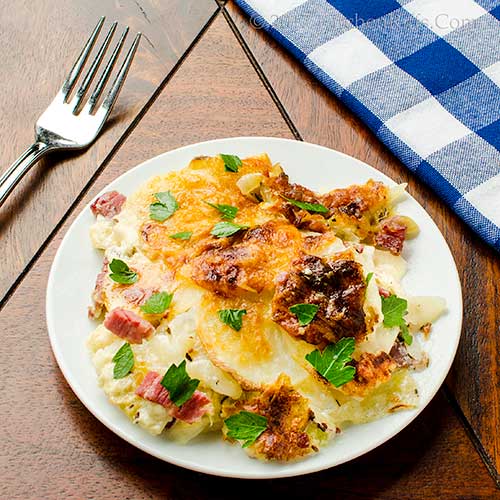 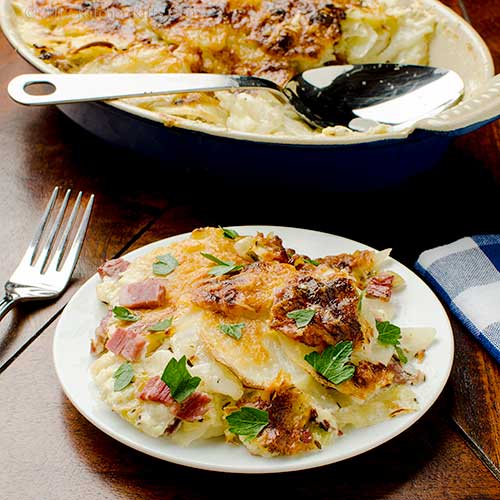 “Love this dish,” said Mrs. Kitchen Riffs. “It reminds me of the traditional Corned Beef dinner. But it’s a lot easier to make.”

“The traditional meal is great,” I said. “Although I usually prefer to make it with Steamed Veggies rather than boiling them in the same pot with the corned beef. And sometimes I like to make Roast Cabbage instead of steamed.”

“That dish is wonderful,” said Mrs K R. “As is Braised Cabbage. And, much as I love boiled or steamed potatoes, I think Irish Colcannon is even better. It’s such a tasty combo of mashed potatoes and kale or cabbage. And one of the best things about a corned beef dinner is using the leftovers for Corned Beef Hash.”

“You can serve any of those dishes with the terrific Irish Soda Bread you make,” I said. “And for dessert, your Irish Potato Candy can’t be beat. Those things are addictive.”

“Yup, and maybe we could have some Irish Coffee as an after-dinner drink,” said Mrs K R.

“For pre-dinner sipping, there’s The Blackthorn Cocktail we recently posted about,” I said. “Not to mention the Brainstorm Cocktail and the Hearn’s Cocktail. Those are all good Irish-whiskey drinks.”

“Of course, if we consume all that,” said Mrs K R, “we’ll be sure to turn green for St Patrick’s Day.”

“But it comes just once a year,” I protested. “And there’s so much good stuff to eat and drink!”

“True,” said Mrs K R. “But there aren’t enough four-leaf clovers in the world to save you from the consequences.”