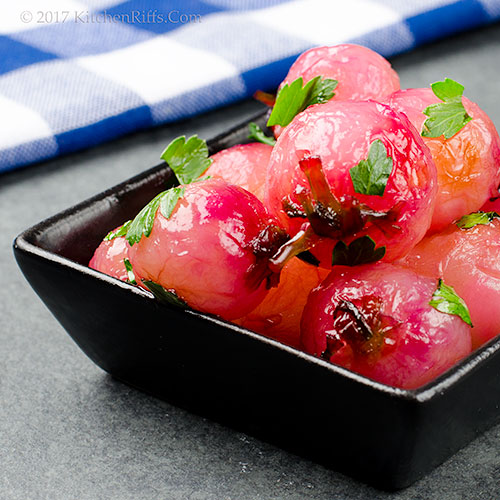 Buttery, slightly sweet, with a mild earthy note – these taste like spring

Not impressed? This recipe may change your mind.

When you glaze radishes in butter and a bit of sugar, they lose most of their sharp edge. And they develop a deep, rooty flavor that pairs particularly well with roast meats. Best of all, glazing radishes is an easy way to cook them.

So make more than you think you’ll need. Everyone will want seconds. Maybe thirds. 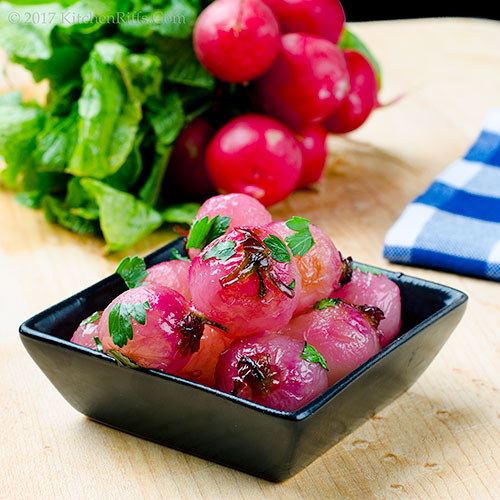 Radishes are fast-growing and love cool weather, so they’re always one of the first locally grown produce items available in spring. They’re great raw in salads, of course, but when cooked their flavor develops new dimensions.

You can use any kind of radish in this recipe. We used ordinary red radishes, but other varieties work equally well.

We prefer to buy radishes in bunches, with the greens still attached (they’re fresher and generally higher quality than the bagged ones). We don’t use the greens in this recipe, but they’re edible. You can add them to salads or use them in soup. Or even add them to a smoothie.

This recipe takes about 20 minutes to prepare, and serves 4 as a side dish (you can easily halve or double the recipe).

Leftovers keep well for a few days if refrigerated in a covered container. We suggest warming the leftover radishes before you serve them. 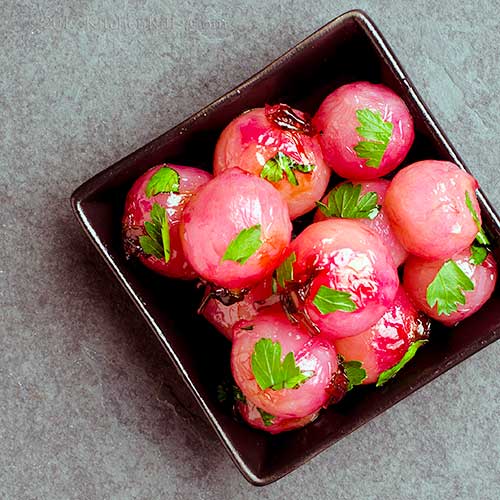 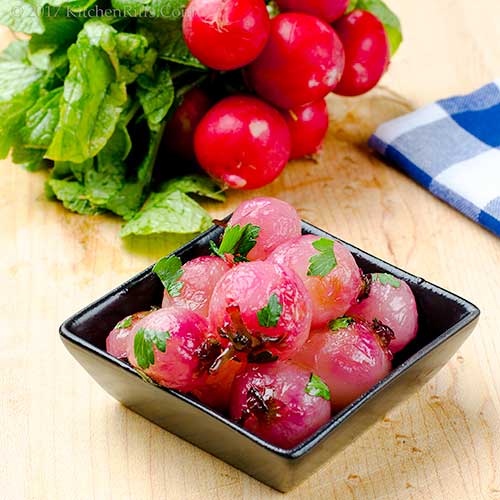 “Easy to grow, too,” I said. “Assuming the rabbits don’t eat their leaves before the roots have time to develop.”

“The moment we plant our seeds, all the local critters just spring to life,” I said.

“And once things start growing, they really spring into action,” said Mrs K R. “I swear I can hear them munching out there.”

“Maybe we should just admit defeat,” I said. “I don’t feel that old spring in my step when I contemplate fighting off the critters once again.”

“Agreed,” said Mrs K R. “So here’s our resolution: Instead of battling wildlife, we’ll just spring for the great locally grown produce at the farmer’s market.”

And give new meaning to the term “spring chickens.”

You may also enjoy reading about:
Braised Belgian Endive
Braised Fennel
Moroccan Carrot Salad
Moroccan Orange and Radish Salad
Roast Asparagus
Or check out the index for more recipes
Posted by Kitchen Riffs at 8:30 AM