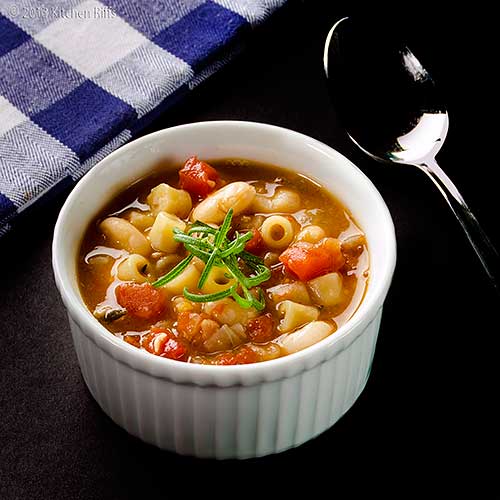 This Pasta and Bean Soup is Italian Comfort Food

Pasta e Fagioli (Pasta and Beans) can be found throughout Italy.  It’s a dish that everyone eats — and one that most everyone thinks of with nostalgia.  Comfort food at its finest.  And with the cold winter weather we’re having here in the Northern Hemisphere, we all need some comfort!

Pasta e Fagioli is usually served as a soup (a few versions are more like a very thick stew), and every region has its own recipe.  Heck, I think every family has its own recipe.  I recently started looking at all the Pasta e Fagioli recipes in my cookbooks and stopped when I reached the 30th different version — and I wasn’t even halfway through my cookbook collection!  So even though the basic procedures and ingredients for making this dish are pretty similar, there are countless variations.

The traditional recipe involves soaking and then cooking dried beans, a procedure that takes some time (we’re talking hours, though the active time is minimal).  And my recipe does specify dried beans.  But there’s a shortcut you can take (detailed in the Notes), which means you can actually put together a credible version of this dish in about 40 minutes.  Add a salad and you have a complete and nutritious meal. 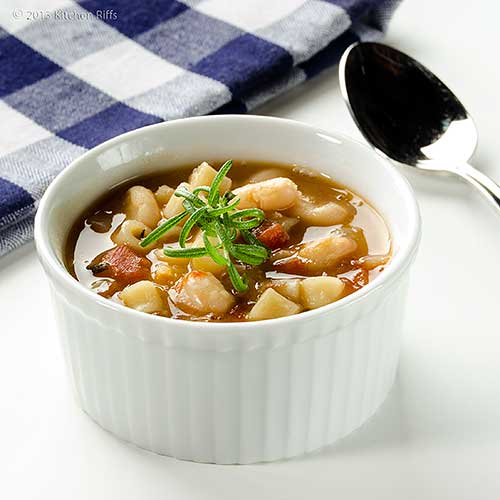 In Italy, Pasta e Fagioli is made with either white beans (such as cannellini or Great Northern) or dark beans (like borlotti, cranberry, or pinto).  The bean selection tends to vary by region, and both types produce good results.  In the US, Great Northerns (white) and pintos (dark) are the most readily available.  I specify white beans for this recipe, but feel free to substitute.

Pasta e Fagioli is sometimes a vegetarian dish, made with water rather than meat stock.  It can also be made without additional meat flavoring.  However, you get better flavor with both stock and a bit of meat, so I’m adding both.

You can use prosciutto or pancetta, but I’ve opted for bacon in my version of the dish.  Pancetta and bacon are made from the same cut of meat (pork belly) and both are salted and cured.  Most pancetta is not smoked, while bacon generally is (at least in the US).  However, in northern Italy (in places like Montferrat) pancetta is often smoked too, so bacon makes an admirable substitute for their style of Pasta e Fagioli.  Most of us have bacon on hand, and it’s might tasty in this dish, so it seems a natural choice.

Preparing the beans takes most of the time when making this dish.  For best results, do an overnight soak — at least 8 hours.  (The quick method reduces this to about an hour; details in the Notes.)  Then you need to cook the beans for an hour, add some flavorings, and cook for another half hour or so.  You can make it a day ahead and reheat (but don’t add the pasta in Step 12 until you reach the reheating stage).

This recipe serves about 8, and leftovers freeze well.

For Preparing the Beans:
For Assembling the Soup:
Procedure

The first 4 steps pertain to preparing the beans; soup assembly begins with Step 5. 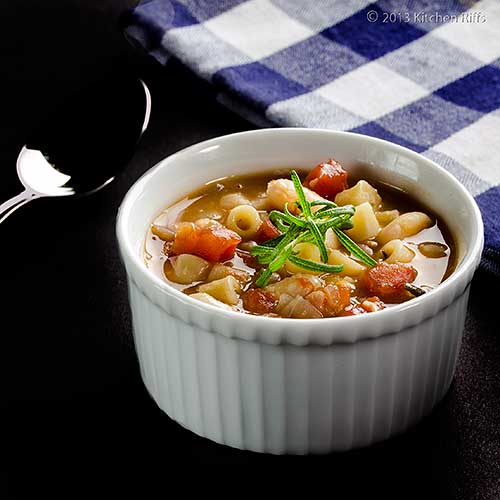 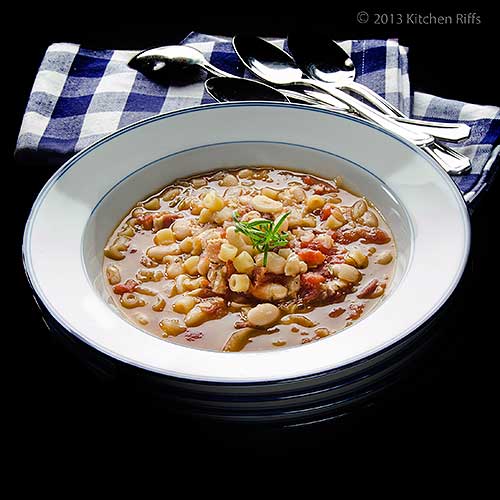 “I wonder if we were Italians in a prior life?” Mrs Kitchen Riffs asked.  “I mean, look at the way we’re inhaling this soup!”

“Maybe,” I said, scraping my spoon against the bottom of my bowl.  “But we’re pretty much the same when we eat Indian, or Chinese, or — well, anything.”

“True,” she said.  “I guess we’re citizens of the world.  Stomach wise, I mean.  But this soup is something special, you have to admit.  Say, did you really find 30 different recipes for it?”

Mrs K R slid her bowl across the table to me.  “I thought you’d never ask.”