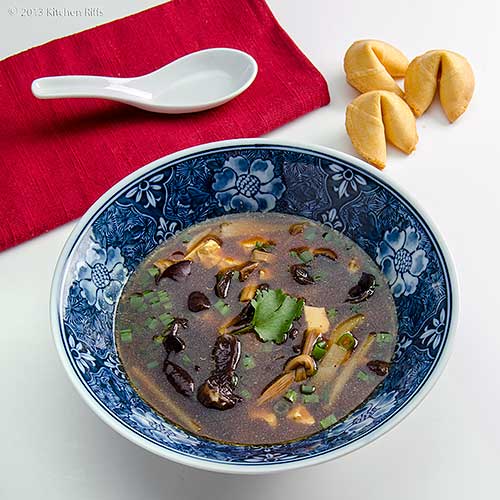 You probably know Hot and Sour soup.  This stock-based medley of mushrooms, protein (often pork, chicken, or tofu), and tangy flavorings is a staple at Chinese restaurants.  With spicy high notes that contrast pleasingly with sour bass notes, Hot and Sour plays a symphony on your tongue.

It’s one of my favorite soups, so I used to order it almost every time we went out for Chinese food.  It took me a while to realize that I could prepare it at home.  Once I really looked at recipes, though, I finally discovered how easy it is to make Hot and Sour Soup.  It does require some special ingredients, but many supermarkets (and all Asian markets) carry them.  And because you can make the soup the way you like it, your version is bound to be more pleasing than any restaurant’s.

So I hope that, like me, you’ll find this recipe a win-win:  You’ll add a great soup to your cooking repertoire.  And next time you visit a Chinese restaurant, you’ll feel free to explore some of those other soups on the menu.  You know, the one’s you’ve always ignored because you just had to have Hot and Sour! 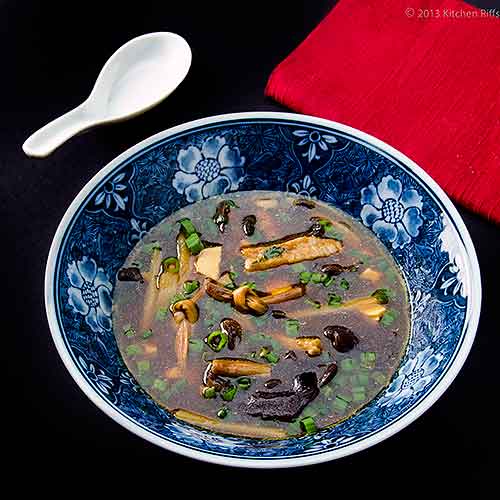 The cuisines of most East and Southeast Asian countries feature some form of Hot and Sour Soup. It’s particularly popular in Vietnam, Cambodia, and Thailand, although the composition of the soup varies from country to country.

The version we’re making originated in China. It gets its heat (spiciness) from freshly ground pepper. Tradition calls for white pepper, but you can substitute black. The “sour” part comes from vinegar, specifically black (Chinkiang) vinegar. If you don’t have this on hand, you can substitute wine vinegar or rice wine vinegar. Most Chinese restaurants in the US thicken their soup with cornstarch. I actually prefer it without the cornstarch, but I include it as an option in the recipe. Most US versions also include some beaten eggs poured into the soup and cooked just before serving. That’s not in my version, but I include information about how to do this in the Notes if it’s something you want to do.

I looked at dozens of recipes while working to formulate my own, and probably borrowed ideas from all of them. But the two most influential sources were Fuchia Dunlop’s Land of Plenty and James Peterson’s Splendid Soups.

Cooking time for this soup is only a few minutes. But you do need to prep some ingredients, including soaking and rehydrating dried mushrooms. So figure at least 45 minutes from start-to-finish when you prepare this dish.

This recipe yields 3 to 4 main-course servings, and about 8 smaller first-course servings. Leftovers will keep refrigerated in an airtight container for a few days. 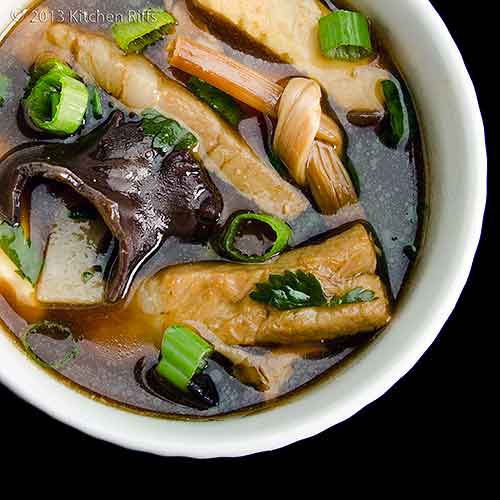 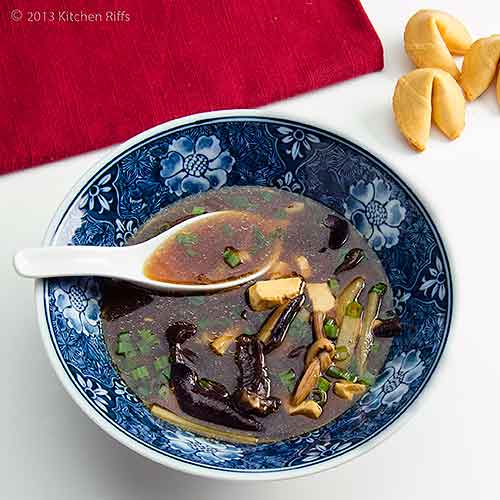 Mrs. Kitchen Riffs was making gentle slurping noises as she sipped her Hot and Sour soup.  OK, I can’t lie — I was doing the same thing.

“Gosh this is good!” she exclaimed when she came up for air.  “We always order it when we eat at Chinese restaurants.  We’ll save a bundle making our own at home.”

“And the flavor is so much better,” I agreed.  “It’s a perfect starter for a Chinese meal.  And it works well at the beginning of many western meals, too.”

“Speaking of which,” Mrs K R inquired, “what’s the rest of our menu for today?”

“What we always have in a Chinese restaurant — Singapore Noodles! What could be better?”

“One of my favorites!” she said, approvingly. “Only thing we’re missing are some pot stickers.”

“That’s a recipe we still owe our readers,” I replied. “But it’ll be a while before we get to it.”

“That’s OK,” Mrs K R responded wistfully.  “They’d be great with this meal, but I guess I’ll just have another helping of this wonderful soup instead.  And a big serving of Singapore Noodles.  I’ll manage!”

I have to admit that Mrs K R handles adversity well.