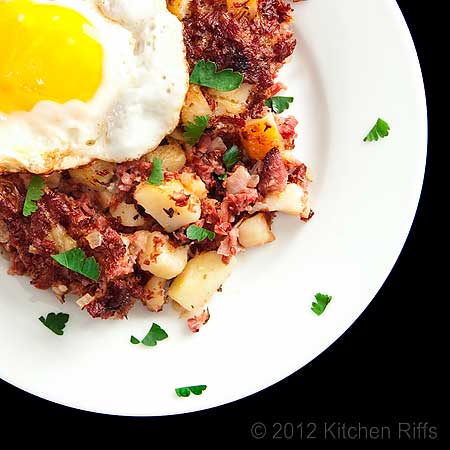 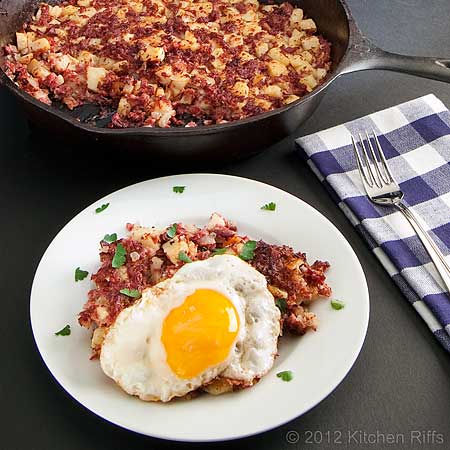 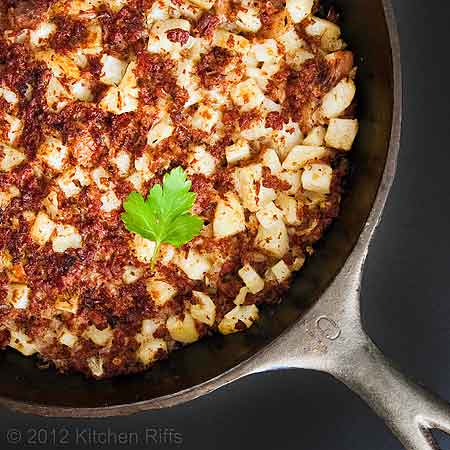 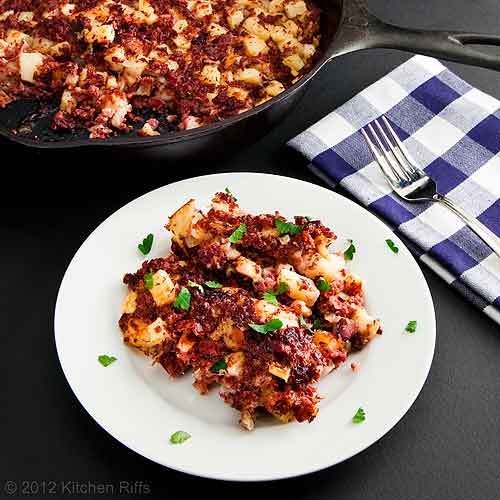 Wow! That sounds wonderful, particularly this morning, the day after St. Patrick's day. The idea of the yummy egg yolk mixing with the hash is divine.

Hi Amy, it's good stuff! Corned Beef Hash + Egg is a classic combo. Thanks for your comment.

This looks amazing. I love a runny egg on top of my potatoes anytime. Great use of leftovers, I'll say!

Hi Courtney, it tastes even more amazing than it looks! And I agree it's the perfect use for St. Patrick's Day leftovers. Thanks for stopping by.

Amazing recipe, reminds me of the Greek Shakshuka

Hi Chef Basar, interesting idea. The Shakshuka I'm familiar with is more of a liquid (with eggs poached in it), but that's the North African/Israeli version. I don't think I've ever had the Greek version - I'll have to check it out. Thanks for commenting.

You have no idea how much I want this right now! Homemade corned beef hash is one of my faves ... and put an egg on it? Yes, please!

Hi Kimberly, :-) It's good stuff, isn't it? And totally addictive. Thanks for taking time to comment.

Healthy and satisfying dish for the most important meal of the day...Happy Breakfast! This I will give a try!

Hi MyFudo, Corned Beef Hash is great for breakfast (don't forget the egg!). Or lunch. Or dinner. Or . . . I could go for some right now! Definitely worth trying. Thanks for stopping by.

John, this looks amazing. I loooooooooove hash and with a poached egg, heaven on a plate. I'm hoping the leftover corn beef lasts long enough for me to make this!

Hi Denise, Corned Beef Hash is so good, isn't it? It's funny, although I know how to make lots of fancy dishes (and enjoying doing so), it's the really simple things that I tend to crave the most. Thanks for taking time to comment.

omg this corned beef hash looks so delicious especially with that perfect fried runny sunny side up! I can't imagine how amazing this tasted like!

I love corned beef and I even bought the canned corned beef before when I was really craving for it. It's a shame that I don't make it often enough because I never knew what to do with the leftovers. But that's not a question any more :)

Thanks for sharing the recipe!

I love your kitchen notes. I need to take some lessons from you - it really helps to add your personal notes to a recipe. I'm passing this along to my mom. She made corned beef this year and has plenty left over. :)

Thanks for taking me down memory lane. I have not had this dish in a very long time. Love the egg on top with the crispy buts of the has. Take care, BAM

Hi Yi, it was delicious! All gone now, alas. I never make Corned Beef enough either - something I intend to remedy. Thanks for your comment.

Hi Mother Rimmy, thanks! One of the nice things about the Notes is it's an easy, quick way to add info that people tend to skip over if you discuss it in the recipe head-notes (or at least that's what I keep telling myself). Hope your mom likes the recipe, and thanks for commenting.

Hi Bam's Kitchen, it's been years since I've made this, too. But I enjoyed it so much I'll be doing it more often in the future (well, at least every St. Pat's Day!). Thanks for stopping by.

My mother was just complaining because her guests ate all the corn beef and she didn't have enough for morning hash. This is a keeper. Thanks!

Hi This is How I Cook, oh no! Although the big corned beef dinner is great, the hash is the best part! Maybe next year she should make 2 briskets - one for the guests, one for the leftovers? Thanks for your comment.

We love some hash around here (sans you-know-what)--your photos are doing this dish proud! I LOVE the suggestion of putting the taters under the broiler to brown them up a bit. Brilliant!

Hi Kelly, the best part of hash, IMO, is the crunchy brown crust, and the broiler does a great job of that. It's an easy and quick technique that I use all the time. Thanks for stopping by.

Gotta have the egg on top and love that crunchy crust. Beautifully done!

Hi Maureen, yup, the egg is the perfect topping. And I'm with you - I love that crust. Thanks for your comment.

My husband loves corned beef hash but rarely gets to eat it. This looks so much better than any greasy spoon variety! Obviously, it all starts with homemade corned beef :-) Maybe some day...

Hi Katherine, I've had some pretty good greasy spoon hash, but it's probably more the exception than the rule. I agree the homemade kind is the best; made with your own corned beef, natch. Thanks for stopping by.

mmm sounds so homey and yummy. you've really put eggs on my mind tonight. all i want is your hollandaise over poached eggs... AS WELL as this lovely corned beef hash!

Hi Lannie, Hollandaise over Corned Beef Hash is a great idea! With a poached egg too, of course. A nice riff on Eggs Benedict. Thanks for taking time to comment.

Your corned beef look so comforting and delicious. I love that you added fried egg on top. The runny egg makes everything so nice and tasty!

Hi Nami, Corned Beef Hash is great all by itself. With the egg? Divine. Really a nice combo. Thanks for stopping by.

I woke up to home made corned beef hash and egg. What a treat. He did saute the onions first. This couldn't be better. Thanks for sharing this wonderful recipe!

Hi Sharon, glad you got some of this! I can definitely see advantages in sauteing the onions first. Glad you enjoyed, and thanks for commenting.

We had corned beef and cabbage for dinner last night. It is always a favorite, and there are always leftovers. I'm going to try your hash recipe tomorrow evening as it looks like just the ticket for a cold winter dinner. Not to mention that my husband believes that everything is made better with a runny fried egg on top.

Hi Nancy, I'm pretty sure everything really is made better with a runny egg on top! ;-) Thanks for the comment.

I usually mash up the spuds more when I make my hash. But hey everyone is different. We would normally eat this as a lazy night dinner. Yours looks so good, I think I might have to make up another corned beef pronto.

Hi Liz, I sometimes really mash up my potatoes too, although more often do it this way. But I'll eat corned beef hash any way I can get it! ;-) Thanks for the comment.

That was a great tip for not over stirring the hash. This really is an epic anytime of the day dish, and especially timely with St. Patties day coming soon!

Hi Heidi, we love this stuff. SO good. :-) Thanks for the comment.