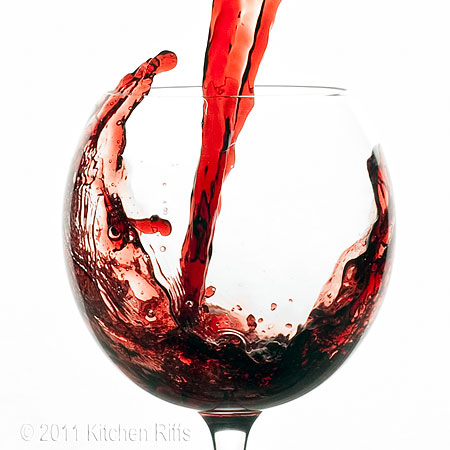 Perfect for Thanksgiving:  The Hows and Whys of this Exuberant Wine

“Le Beaujolais nouveau est arrivé!”  Every year on the third Thursday of November – Beaujolais Day – those words signal that “The New Beaujolais has arrived!”

And by new, we mean new — this wine is released 5 to 8 weeks after harvest.  In the wine world, it doesn’t get any newer than that.

So, what exactly is Beaujolais Nouveau?  And why is it so great for Thanksgiving?

You’ve got questions.  I’ve got answers. 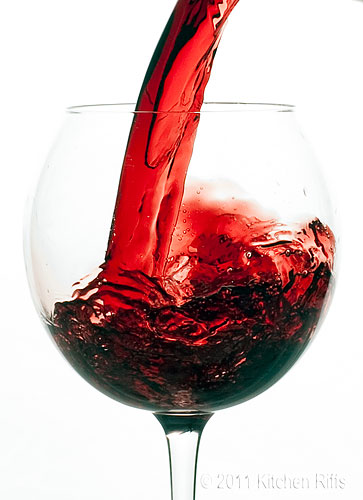 Before we get to Beaujolais Nouveau, we need to understand the basics of Beaujolais wine — which also comes in several varieties other than “nouveau.”

Beaujolais (the place) is a province in France that is north of Lyon (which is just under 300 miles south-southeast of Paris). The province gives its name to the most famous wine grown in its environs.

Beaujolais (the wine) is a low tannin, (usually) red wine that is almost always made from the Gamay grape (the white is made from Chardonnay). It’s a light, fruity, easy-to-drink wine that usually is consumed within 5 years of its release. The Nouveau (new) variety is released just a few weeks after the grapes are picked; regular Beaujolais is released a year after harvest.

The regular Beaujolais often is sold simply as “Beaujolais.” A step up in quality is “Beaujolais-Villages.” Another step up (sometimes many steps) would be the “cru” wines. Cru is a French word that in this context means something like “growth” — and typically is used to designate a superior wine. A cru wine always comes from a specific place. In the case of Beaujolais, that place is one of 10 villages: Brouilly, Chénas, Chiroubles, Côte de Brouilly, Fleurie, Juliénas, Morgon, Moulin-à-Vent, Régnié, and Saint-Amour.

There are several producers of Beaujolais whose wines you’re likely to find in a good shop: George Duboeuf, Louis Jadot, Barton & Guestier, Louis Latour, and Olivier Ravier. Of these, Duboeuf’s Beaujolais is the most widely distributed in the US. It is almost always a good wine and usually a good value.

But in truth, any Beaujolais is almost always a good wine and a good value — and can be enjoyed either on its own or with a meal. Although it lacks the complexity and depth of an aged Burgundy or Pinot Noir, it also sells for a fraction of the price. And it’s a wine that doesn’t get in the way of the food you’re eating, which tends to be a good thing.

What Is Beaujolais Nouveau?

Nouveau means “new” in French, and wine with that designation (also called vin de primeur) comes to market almost immediately after the grapes are picked and pressed into wine. Beaujolais Nouveau is the most famous of the nouveaux (in fact, when you ask for just “Nouveau,” it’s understood to mean Beaujolais Nouveau). In the case of Beaujolais Nouveau, the wine has a fresh, playful, exuberant taste, but lacks the depth and dimension gained by aging the wine or exposing it to the wood of a wine cask.

Nouveau doesn’t have as much heft as regular Beaujolais. It also can vary in quality from year to year. Of course, regular Beaujolais can vary too. But with aged wine, makers can better control the process in order to achieve the flavor profile and quality level that is the particular winemaker’s signature. Beaujolais Nouveau is essentially raw wine with minimal winemaking skills applied to it, so you’re not always sure what you’re going to get. In the past, there have been some clunkers. Nowadays, almost every Nouveau is quite drinkable, although not always memorable.

But then, it’s not supposed to be memorable. It’s more a celebration of wine – and over the years the celebration has become a huge marketing opportunity for winemakers. Some people think Beaujolais Nouveau suffers from all the marketing hype, and they may have a point. Certainly, no other wine enjoys the kind of hoopla that accompanies the release of each year’s Nouveau. Still, it’s a fun tradition and a great wine, so maybe putting up with some hype is worth it.

Which Beaujolais Nouveau To Choose?

Wine shops seem to be importing fewer labels of Beaujolais Nouveau than they did in the past. If you’re faced with a selection, however, and don’t know which to choose, I suggest buying the George Duboeuf label. Duboeuf is practically synonymous with Beaujolais (the same way Campbell’s is synonymous with soup), and Duboeuf always produces a decent Nouveau. It’s usually priced between $9 to $11.

You might also want to look for whatever Nouveau Kermit Lynch (a wine importer and distributor) is offering this year. (The wine distributor’s name is always on the label, sometimes just on the back label). I’ve found the wines that Lynch selects to be good.


Why Beaujolais Nouveau for Thanksgiving?

Thanksgiving dinner poses a challenge when it comes to matching wine with food.  Turkey has both light and dark meat.  So do you serve a white wine for the light meat?  Or a red wine for the dark?  The meal also typically features savory and spicy (stuffing) and sweet (cranberry sauce and candied sweet potatoes) dishes.  It’s difficult to find a wine that handles such a wide gamut of flavors.  To compound the difficulty, you may have people at the table who only drink wine at festive occasions, and thus may prefer a lighter, fruitier wine rather than one with lots of tannin, like a fine cabernet sauvignon.

A sparkling wine like Champagne can be a good solution.  Its flavor isn’t too heavy, and it accommodates the Thanksgiving menu fairly well.  (Though if you go this route, you might not want to choose a real — meaning French — Champagne.  It’s probably better to opt for something less expensive with more fruit.  A Spanish cava like the ubiquitous Freixenet might be a good choice.)

For my money, however, Beaujolais Nouveau is really the only wine to serve.  Why?  Because it is perfect for Thanksgiving!

For one thing, it’s released exactly a week before the holiday.  You can’t ask for better timing!  More importantly, it has a fruity (but not sweet) and robust flavor that handles the range of tastes on the Thanksgiving table with aplomb.  It’s delicious with both light and dark turkey meat.  Dressing?  Ditto.  Cranberries?  Goes great.  You get the picture.  It’s even good with pumpkin or pecan pie.  Best of all, it’s a wine that even people who don’t much like wine tend to enjoy.

How To Serve Beaujolais Nouveau

OK, you already know this part:  Open the wine and pour it into glasses!  Depending on how big your glasses are and how generously you pour, you’ll get between 4 to 6 servings of wine per bottle.

What you might not have considered is chilling the wine first.  Generally, we drink red wines at “room temperature” (though when that rule was formulated, rooms generally were cooler than today’s centrally heated houses).

But Beaujolais in general, and Nouveau in particular, benefits from a brief stay in the refrigerator before serving.  Refrigerate for 45 minutes or so.  Around 55 degrees Fahrenheit is ideal.  But don’t worry if you get it a bit too cold; it’ll warm up in a hurry when you pour it into glasses. 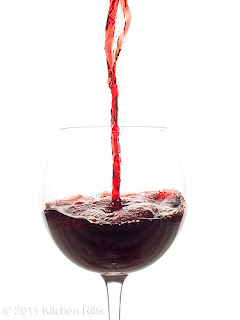 Beaujolais Nouveau is meant to be consumed when it is extremely young — as in, immediately upon purchase.  Tradition has it that you should finish your Nouveau by New Year’s Day.  It’s not that the wine will turn to vinegar on January 2nd.  It will still be perfectly good to drink.  But this wine isn’t made for aging, so by early spring it will begin to lose its vibrancy and fresh personality.

For years now, Mrs. Kitchen Riffs and I have always bought a supply of Beaujolais Nouveau within a day or two of the third Thursday in November (the 17th this year).  Of course, we share a bottle almost immediately just to see what the year’s Nouveau tastes like.  And because we favor turkey for both Thanksgiving and Christmas, it’s always the wine we serve at our house for those meals.

But we usually still have some left over in the last week of December.  And believing that you can’t be too careful, we always make sure to finish our Nouveau before the end of the year.  Because hey, you never know, right?

Posted by Kitchen Riffs at 9:30 AM