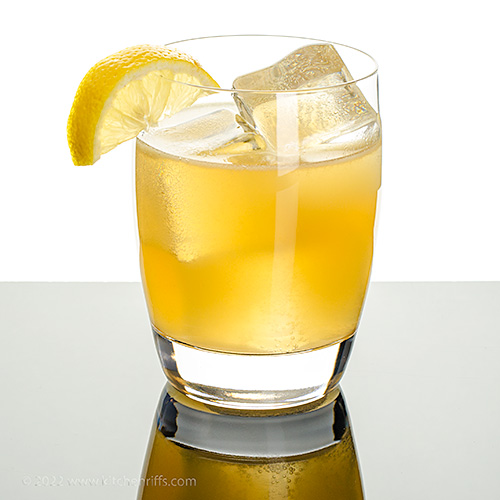 Need a cooling, cheering summer refresher? Something you can make in quantity for a crowd? Or just by the glass for yourself and friends?

Punch to the rescue! Philadelphia Fish House Punch was one of America’s earliest “mixed drinks.” Several founding fathers drank it. Who knew they were such party animals? 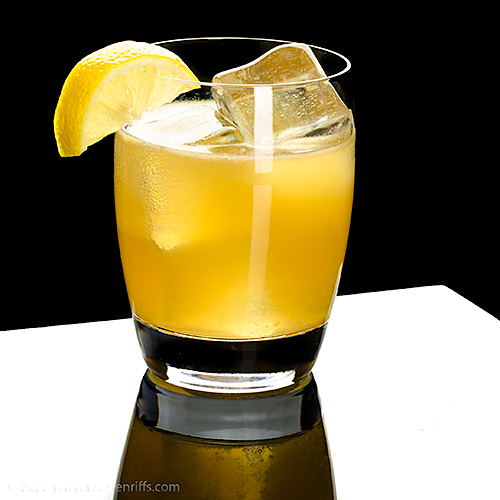 Punch combines alcohol (particularly spirits) and fruit. It arrived in the American colonies with the first English settlers. Perhaps the most famous colonial-era punch was the one we feature today.

The Philadelphia Fish House Punch originated with a gentlemen’s club that called itself (for some reason) the State in Schuylkill Fishing Company – or, before independence, the Colony in Schuylkill. The members eventually built a clubhouse that they named The Castle. But most people just called it the Fish House.

The club worthies created a punch from rum, cognac, lemons, and peach brandy – but they kept the original recipe secret. Today, there are several recipes that purport to be the real deal. We favor the one championed by cocktail historian extraordinaire David Wondrich.

Originally, the punch was made in a bowl large enough to use as a baptismal font (for which it was actually purposed). We don’t need a batch that big, so we favor a single-serving recipe. But if you’re serving a crowd, we include a recipe for the full-sized version in the Notes. 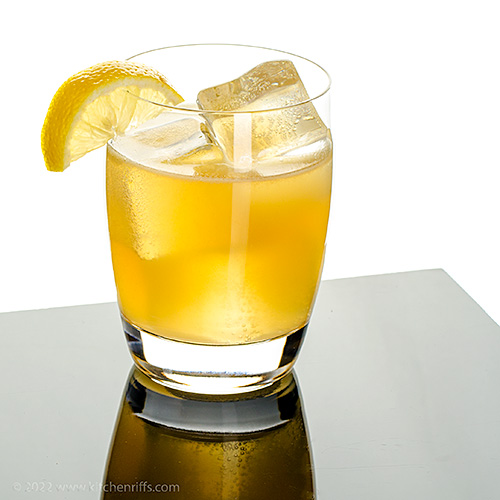 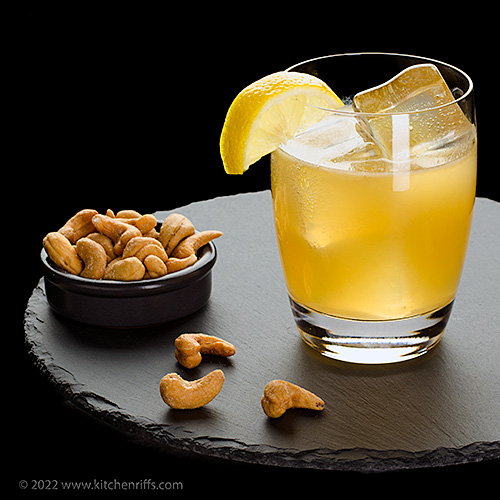 “Tasty!” said Mrs. Kitchen Riffs, holding out her glass for a refill.

“I’m pleased as punch that you like this,” I said, mixing another round.

“But we better be careful,” said Mrs K R. “I hear that George Washington once overindulged on this punch and was out of commission for three days.”

“Wow, dangerous,” I said. “He could have mislaid his false teeth.”

“He supposedly succumbed after offering a separate toast for each of the 13 colonies,” said Mrs K R.

Yeah, that would have been a knockout punch.

As always, very beautiful and I bet it's very tasty. Rum-based cocktails are just perfect for the summer.

Hi Angie, this has a ton of flavor -- really good stuff. :-) Thanks for the comment.

John, one of the things I always enjoy about your drink recipes is the history lesson. This one is particularly historical! Also sounds delicious and refreshing. Thanks!

Hi Terry, it's the history of drinks that got us interested in cocktails. Came for the history, stayed for their good looks and flavor. :-) Thanks for the comment.

This sounds delicious! I believe we have the ingredients to make a pitcher (or two).

Hi Lydia, you'll love this -- really good stuff. :-) Enjoy! And thanks for the comment.

This is perfectly refreshing for the summer. Looks great.

Hi Dahn, it's exceptionally tasty. :-) Thanks for the comment.

The amounts of booze in the full-size version are mind-boggling. Did you say how many servings that made? I think I'd like this one.

Hi Mae, that's one serving, although it's meant to take awhile to sip. But you could easily serve this to two -- that's what we often (although not always) do. Thanks for the comment.

Sounds wonderful! Hats off to the founding fathers for this!

Hi Anne, it really is wonderful. :-) Thanks for the comment.

This sounds like my kind of cocktail- lots of rum and fruit- but dangerous, though. This drink will go down so easily that in no time, you'll feel as "pleased as pinch!" Several of my direct ancestors from the 18th century would have enjoyed this drink- Christopher von Schlegel (arrived in the Colonies in 1700 and his son, Jacob, born 1723). If I could only ask them!

Hi Fran, you owe it to your ancestors to make a round of these. :-) Thanks for the comment.

Despite its peculiar name (I was a bit concerned there was fish involved lol), this is a delightful cocktail with a complex yet fresh flavour. Loving it!

Hi Ben, yeah, the name is definitely unusual, at least to modern ears. But great flavor! :-) Thanks for the comment.

Summer is the perfect time to test out new cocktails and you always have wonderful suggestions! Looks like a winner!

Hi Liz, we definitely do drink more cocktails at this time of the year. :-) Thanks for the comment.

This is a keeper. Anything with peach and I'm all in. That also goes for Jamaican run. I love this punch. Thanks John.

Hi MJ, it's got feisty flavor. :-) Thanks for the comment.

It sounds terrific for summer.

Hi Eha, I think Calvados would be pretty good. Wrong fruit, yes, but its nose is so attractive that I think it'd be a pretty good alternative to the peach brandy. And yeah, this definitely is a lot of booze -- one wants to take be careful with this one. Thanks for the comment.

Being from Philadelphia, you might assume I’d heard of this — but, no! It’s new to me and I definitely want to try it! Wondering, as it is peach season here, if infusing some brandy with peach slices might do the trick? What do you think, John?

Mmm, peach brandy! I'll have to sip on this while I wait for peaches to ripen here in CO — what a delicious summer drink. :)

Hi David, I think infusing brandy with peaches is an excellent idea! Next time we make this we're going to use peach bitters -- I think that be an interesting twist. :-) Thanks for the comment.

Hi Judy, this really is a nice summer drink -- a slow sipper. :-) Thanks for the comment.

Oh yes! This is my kind of drink - rum and juice. You have another winner!

Hi Laura, we LOVE rum drinks. Particularly in summer. And particularly with fresh fruit juice. :-) Thanks for the comment.

Hi Bobbi, it's really good stuff -- terrific flavor. :-) Thanks for the comment.

As I read this, it's 8 degrees here so I'm opting for a hot cup of tea, LOL, but later in the day I would love to try your cocktail.All your American cocktails have such an interesting history, and I still have my original punch bowl and cups from the 80's. A great party favourite, thanks East India Company. Best Pauline.

Hi Pauline, we have a punch bowl too, somewhere. :-) Great for parties! Thanks for the comment.

this sounds fantastic John. I bet it's a knockout. love your photos! We have a couple of popular rum distilleries around here so either would go down well. Cheers!

Hi Sherry, ah, thanks, for that very kind comment. :-)

I have a feeling I'd really love this. Thanks for the recipe!

Found this exceptionally interesting since I live right outside of Philadelphia and never heard of the Fish House or the drink. Looks wonderful and I love your photo with the cashews!

Hi Judee, Philly as a lot of history! It's a good city, and this is a wonderful drink. :-) Thanks for the comment.

I can't say that with "fish'' in the title that this drink has the most appetizing name. LOL But it sure is pretty looking. And I bet it really hits the spot when the weather is warm.

Hi Carolyn, yeah the name is a bit odd. But the drink is good! :-) Thanks for the comment.

Sounds like the perfect summer drink. I love the name of this one.

Hi Dawn, isn't this nice? Terrific flavor! :-) Thanks for the comment.

Yes, I do need a cooling, summer refresher! This would do quite nicely. Lemon and peach sounds delicious.

Hi Lisa, it's been a hot summer, hasn't it? This really is a great way to cool off. :-) Thanks for the comment.

I did not have ginger beer to make the Floradora today so tried this cocktail instead. It has such wonderful layers of flavor with the fresh backnotes of lemon. Since most drink recipes are too sweet for my palate, I used a fraction of the simple syrup and only 1/2 oz apricot brandy (instead of peach) and added a dash of peach blossom and dandelion bitters. It was perfect! This drink gets better and better as the ice melts.