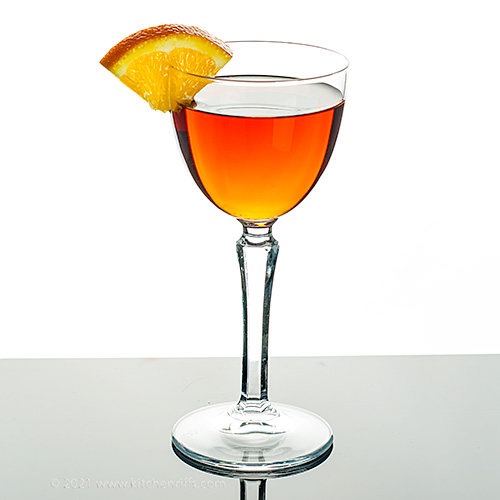 Looking for a new twist on Mother’s Day? Try this tasty tipple.

It features bourbon at play with some spicy, jazzy companions (because New Orleans, you know).

Serve it and toast all the maternal spirits in your life. It’s the right thing to do. 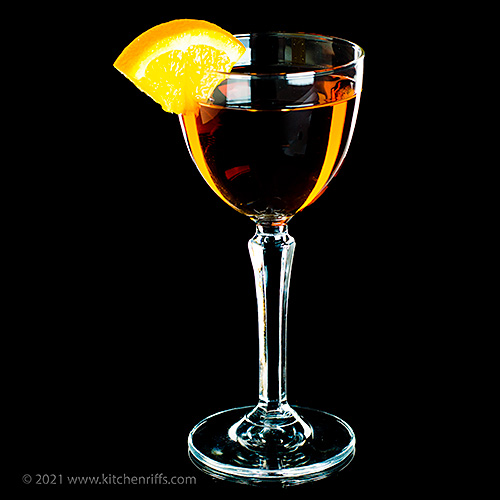 We learned about this drink from Ted Haigh’s Vintage Spirits and Forgotten Cocktails. Haigh discovered it on Chuck Taggart’s website, The Gumbo Pages. (BTW, if you’re not familiar with The Gumbo Pages, it’s one of the best sources we know for authentic Louisiana food and drink recipes.)

This cocktail dates back at least to the early 20th century. It was invented by . . . someone’s mother-in-law (Mrs. Lucien E. Lyons of New Orleans is the lady in question). The original recipe was mixed by the quart – it required an entire bottle of bourbon – and was served from a decanter. If you click the link to The Gumbo Pages in the paragraph above, you can read much more about the history of the drink.

Ted Haigh reduced the recipe to a mere 9 ounces of bourbon – which he suggests will serve 3 people. That’s still a bit much for us, so we cut his quantity in half. Our recipe still requires a hefty 4½ ounces of bourbon, so we say it serves two. 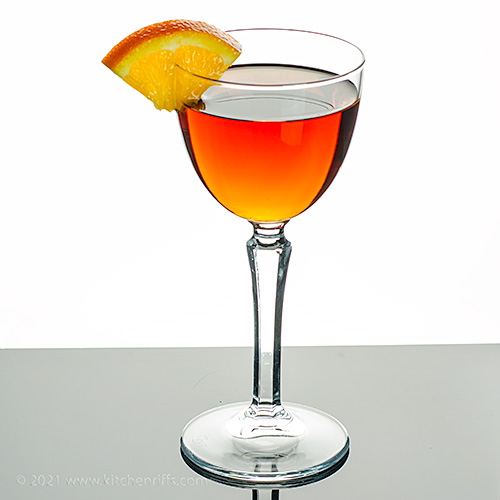 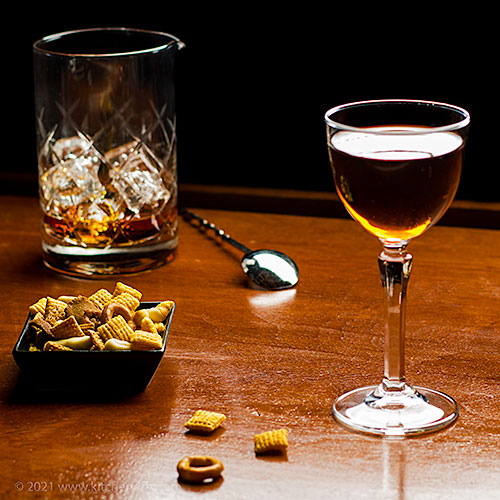 “Yup,” I said. “We tapped the mother lode of cocktail flavor.”

“It’s a drink that every mother’s son would crave,” said Mrs K R.

“But your glass is empty already,” I said. “I feel like a mother bird staring at a gaping maw.”

“Glad you feel the maternal urge to refill it,” said Mrs K R. “But let’s keep quiet about having more than one of these superchargers.”

This is my kind of cocktail! It looks and sounds great, John! And anything connected w/New Orleans is great too!!! Thanks for the Gumbo Pages link! And, as Mrs. Kitchen Riffs says, "Mamma Mia!"

Wow -- a recipe with seven ingredients that I don't have. I have an orange that I could slice. Maybe I'll just eat it and call it a day. Though I suspect I would like that drink if I were in a bar in NOLA.

Your comment about food banks (on my blog) was perfect -- making a financial contribution is much better than giving them food, because they have access to much better prices for food, and because they inevitably have other costs to cover.

A perfect drink for my mother in law. I'm not sure she would like to go too heavy on the bitters though

Hi Mae, this drink really does require some ingredients most people won't have, alas, and it's a really unusual combo of ingredients, too. Although we've used all the ingredients multiple times in the past. :-) Thanks for the comment.

Hi Pat and Dahn, the bitters really work in this. Even though the amount is absurdly large. :-) Thanks for the comment.

What a beautiful cocktail! I would say I will try it on Mother's Day, but it will have to wait. It is not keto friendly like my current drink of choice (vodka rocks with a twist), but it sounds infinitely better.

Wow, this drink looks nice and spicy! Thanks for the heads up on the Gumbo Pages blog (why not change the name to the "Gumbo Chronicles')! There are some great recipes on that blog!

Hi Anne, this is definitely better than vodka on the rocks. :-) But you're right -- definitely not keto friendly. :-( Thanks for the comment.

Hi Fran, really, really spicy. And good! :-) Thanks for the comment.

Hi Martha, it's totally delish -- a really unusual drink. Thanks for the comment.

I have a feeling I would LOVE this cocktail.

I love the name of this cocktail. Stir than shake, got it.

What a gorgeous drink John. Just chuckling a little bit on all the bitters for the Mother in Law. (smiling) Cheers to Mrs. Riff and wishing her a super Mom's Day ahead.

Hi Holly, great name, outstanding flavor. :-) Thanks for the comment.

Hi Bobbi, yeah, this drink is loaded with bitters! Wouldn't think it'd taste that great, but the flavor is excellent. Thanks for the comment.

This is such a fun and beautiful drink! And I love the name and the beautiful shots too, John.

Hi Angie, isn't this nice? Lovely flavor. :-) Thanks for the comment.

The cocktail name sounds scary 🤣🤣🤣 I guess many will think that way feels like something you dont wanna touch. Anyways that looks like an interesting drink, quite complicated with 8 ingredients for a cocktail.

This is such an warm and inviting cocktail recipe. And I like that it didn't lead into a bunch of snarky mother-in-law jokes.

Hi Raymund, this is one of the more complicated cocktail recipes out there (although some Tiki recipes are pretty extensive, too). Thanks for the comment.

whew a bottle of bourbon? sounds good to me:-) what a drink, what great photos!!

I think I would need more than one as well. Looks like a delicious cocktail with a very me meaningful but also fun idea behind it. Well done!

What a great libation, so pretty in that glass too. Happy Mother’s Day to Mrs KR.
Eva http://kitcheninspirations.wordpress.com/

Ooh, my MIL would have loved this! Guess, I'll drink one in her honor!

Hi Sherry, yup, a whole bottle. :-) Thanks for the comment.

Hi Pauline, two of these is nice, but it's rather strong, so we wouldn't want more than that! :-) Thanks for the comment.

Hi Eva, we thought that glass would be appropriate for this drink. :-) Thanks for the comment.

Hi Liz, that's the spirit! :-) Thanks for the comment.

What a complex drink-which is how I like mine! Kind of scary, but soon I'll be a mother-in-law. Better drink one, or two, with that thought!

So many flavors! I'll have to make this for my MIL!

Hi Laura, isn't this nice? A lot of ingredients, but a LOT of flavor. :-) Thanks for the comment.

Cheers to all Moms out there!

Aren't all cocktails in New Orleans made by the quart? :) What a party town. A very unusual drink but it looks extremely tasty. I think I would have the same problem as Mrs. R and look down and realized I've already drank it. :)

Hi MJ, good point re New Orleans and drink sizes. :-) This really is tasty -- and does disappear all too quickly! Thanks for the comment.

I wish I had one of these in front of me right now! Great name and love the ingredients!

Hi Ashley, great flavor, too. :-) Thanks for the comment.

I love any cocktail with a great bitter orange taste. Cheers to all the moms and moms-in-law on your special day tomorrow! ;)

Hi Carolyn, you'd love this -- really deep flavor. :-) Thanks for the comment.

Wow, such a fun and beautiful drink!

The Mothers-in-law in this family certainly would have loved this cocktail! I'd be happy to toast to them with one of my own!

I love that the inventor of this drink either had a mother-in-law who required a full bottle of bourbon, or he thought she'd be perhaps more tolerable and/or amusing after one!

Happy Mother's Day! Hard to believe my mother has been gone for 33 years — but I will raise a glass to her today. Don’t have all the ingredients for this on hand — need to source the Amer Picon. Have everything else!

Hi Liz, toasting is good. :-) Thanks for the comment.

Hi David, the Amer Picon -- or likely a substitute, like the Bigallet China-China Amer, can be hard to find. But a good liqueur store can help you. And as you've noticed, we've used Amer Picon in a bunch of cocktails over the last year! :-) Thanks for the comment.

I think that some MILs requires all 9 ounces. Not mine of course. GREG

Hi Greg, you're probably right about that. :-) Thanks for the comment.

Ooo bourbon and orange makes one of my favourite combinations. This cocktail looks and sounds elegant and delightful!

Hi Ben, orange is such a great flavor in drinks! And we'll never turn down bourbon. :-) Thanks for the comment.

I would have served this on Sunday had I seen it before. I'm certainly not waiting until next year -- so we'll go for it at whatever the next occasion is. So smooth and beautiful! Photos are amazing, as always, John. :-) ~Valentina

Total Wine has the Bigallet China-China :). And my kids wonder how my liquor cabinet gets to full :)

And your photos are wonderful I should add!

Hi Valentina, June is wedding season, so you can just have a generic toast to mothers-of-the-bride-everywhere. Even if you don't know anyone getting married this year! :-) Thanks for the comment.

Hi Inger, Total Wine might be a better place to buy booze than wine! :-)

Hi Inger, ah, thanks so much for that kind comment! :-)

This drink certainly sounds like it packs a punch, but sometimes that's just what you need ;)